Born from the intersection of the ancient Egyptians and Aztecs and the industrial design of ships, trains and motor cars, Art Deco is a movement of symmetry, geometry, and modernity. According to author and curator Jared Goss, Art Deco, also called style moderne, is “an umbrella term for the wide variety of design and architecture created worldwide between the First and Second World Wars.” Art Deco, shortened from the term Arts Décoratifs, came from the Exposition Internationale des Arts Décoratifs et Industriels Modernes or International Exhibition of Modern Decorative and Industrial Arts (Paris, 1925).

Art Deco represented extravagance, style, and energy, and an unshakable confidence in social and technological progress. The desire for ancient themes coupled with synthetic modes of creation brought about streamlined, machine-made objects with natural accents like jade and obsidian, stones favored by Art Deco’s Egyptian forebears. This magnetic style permeated virtually all industries and disciplines of the era, including architecture, advertising, jewelry and fashion, furniture and decorative art. 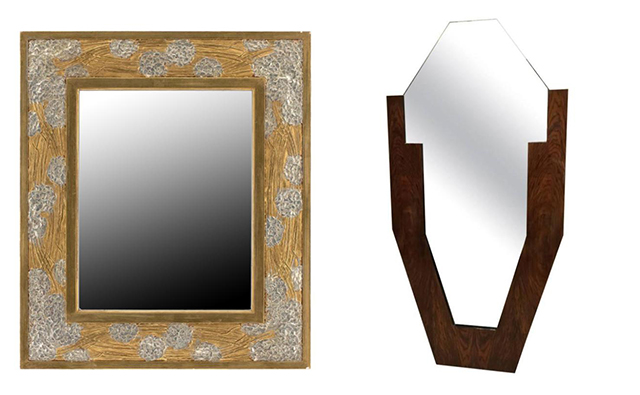 While both Art Nouveau (“new art”) and Art Deco share similarities in their origins as brief design styles in reaction to major world events, the Industrial Revolution and the First World War, respectively, the elements characterizing their look are very different. Art Nouveau was a movement against mass production and industry, taking its inspiration instead from natural forms like curved lines of fanning flowers, creeping ivy and the curling tips of bird wings. Art Deco, however, emphasized modernity and machines, using man-made materials like chrome and stainless steel for the first time. This silhouettes of planes, trains and steamships replaced Art Nouveau’s romantic flourishes as the Jazz Age quickly adopted the sleek, streamlined style. 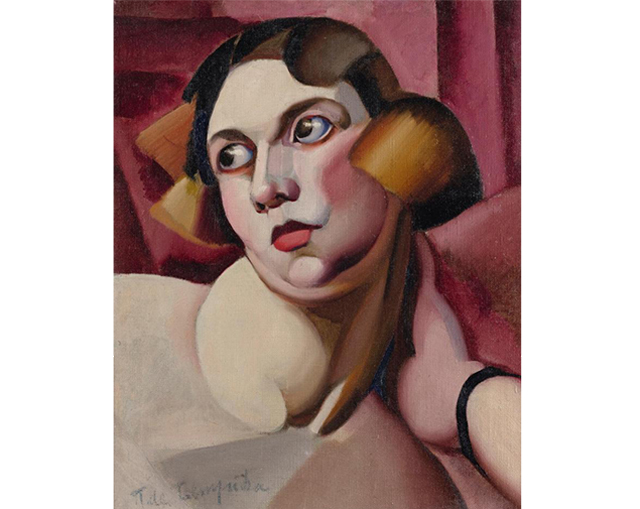 Artist Tamara de Lempicka (1898-1980), known as the “Baroness With A Brush,” painted portraits of writers, entertainers, artists, scientists, industrialists, and many of Eastern Europe’s exiled nobility. Through her network of wealthy connections, her work was exhibited in the most elite of the era’s salons. 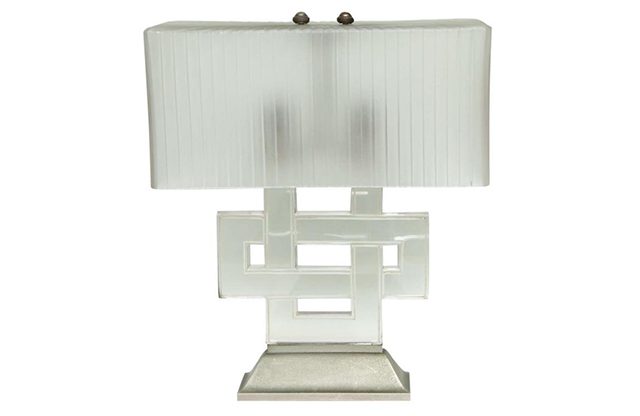 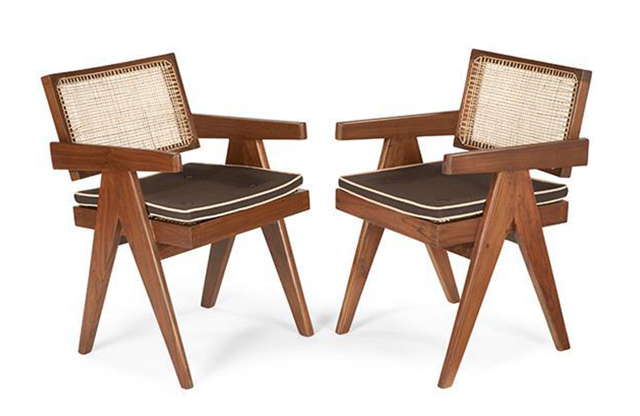 One cannot speak of modernity without including Le Corbusier (1887-1965). Born Charles-Édouard Jeanneret, the Swiss-French architect, urban-planner, writer, designer, and painter’s career spans five decades. He was best known for his belief in rational design that reflected industrial principals. 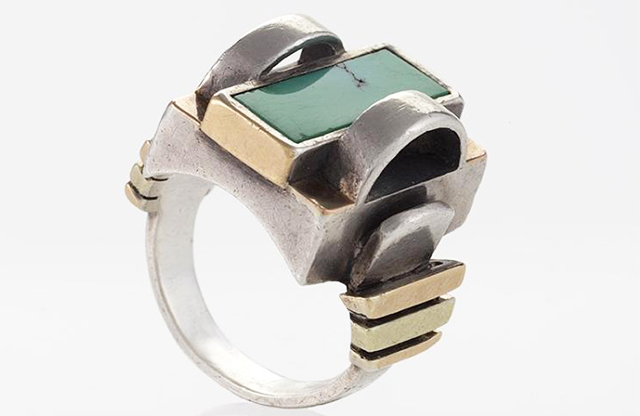 Translating the modern, streamlined aesthetic of the machine into wearable art put Jean Després (1903-1988) on the map as the foremost Art Deco jeweler of the era. The “Picasso of Jewelry Work” was inspired by actual machine parts, and bordering on brutalist, his most conceptual designs included imagery evoking gears and connecting rods. 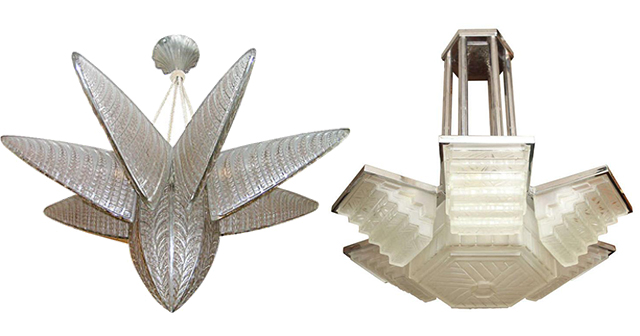 Though the style championed history, Art Deco objects were seldom mass-produced. Instead, the qualities of synthetic or machined manufacturing were reflected in the qualities of Art Deco design – simplistic shaping, planarity, and an emphasis on symmetrical patterning and geometry. Enameling and marquetry were popular techniques for Art Deco furnishings where vivid color, angularity and glossy curves became hallmarks of the period. As transportation took to the skies, Art Deco took note, capturing the world’s new love affair with air travel in its futuristic and streamlined details and accents.

Although Art Deco no longer has the mass appeal it once did as it swept skyscrapers and stores, mantles and vanities, its allure as a decorative style can still be found throughout contemporary culture. From the 2017 Academy Awards, which featured Art Deco-themed set design with beveled backdrops and crystal curtains by designer Derek McLane, to New Zealand’s annual Napier Art Deco Festival which, since its inception, has brought more than $12 million into the local economy – Art Deco continues to inspire conversation and collectors alike. 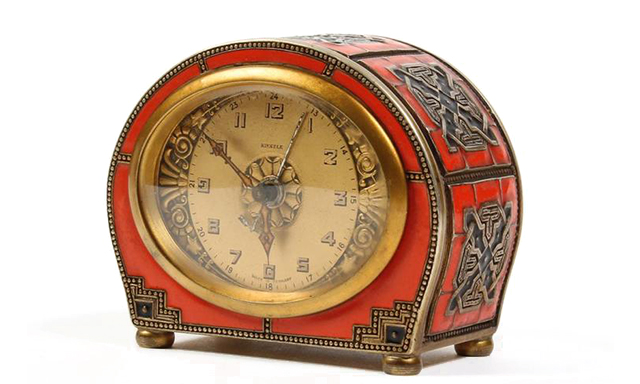 Whether you’re an Art Deco expert or enthusiast, bringing elements of the era into one’s home takes as few ingredients as a well-mixed martini. A simple and stylish Art Deco clock with geometric features gives a library or sitting room a touch of bygone elegance and esteem.

For those who wish to make a bolder statement, velvet upholstery is an excellent choice. A cozy armchair in a rich, deep color or a softer shade for the dining room brings 1920s sophistication to 21st century living. Discerning collectors should note symmetrical angles with rounded corners and natural wood and brass details as hallmarks of the period, and look for these elements to ensure authenticity.

Any visual artist will testify as to the importance of light in a work of art, and the same is true for interior décor and design. Art Deco lends itself to a theatrical and diverse range of sconces, chandeliers and showpieces for every taste and budget. For a romantic flourish, choose a figural lamp of a painted lady or Dianic goddess in situ. Popular for the time, these lamps emphasized a stylized female form in recumbent poses or dancers frozen in moments of contemplation. In contrast, the dramatic points of beveled glass sconces offer a sharp and handsome addition to a library or sparse hallway.

An homage to Art Deco would not be complete without including at least a hint of the black and white color palette that chaperoned it. Whether it’s checkered flooring, a patterned wall-covering, or even a set of tailored pillows, the black and white scheme of the day can be easily worked into existing décor for a tasteful and timely throwback to the era.