Before Art Deco was all the rage, the new kid on the block was Art Nouveau. Artists responded to the Industrial Revolution with a desire to rid themselves of the academic art styles of the 19th century. They did so by creating sprawling architectural forms and works of art that included organic and geometric elements. Furniture, fabric, jewelry, paintings, ceramics, and more reflected the zeitgeist of La Belle Époque until World War I jump-started the transition to Art Deco.

Works in the Art Nouveau style often incorporate elements from nature like flowers or insects. Styles diverge based on an artist’s regional affiliation, but most include intricate “whiplash” curvature, rhythmic and asymmetrical forms, complex compositions, and intense color. Women are prominently featured in Art Nouveau illustration and painting, often representing the modern age.

Stars of the Era 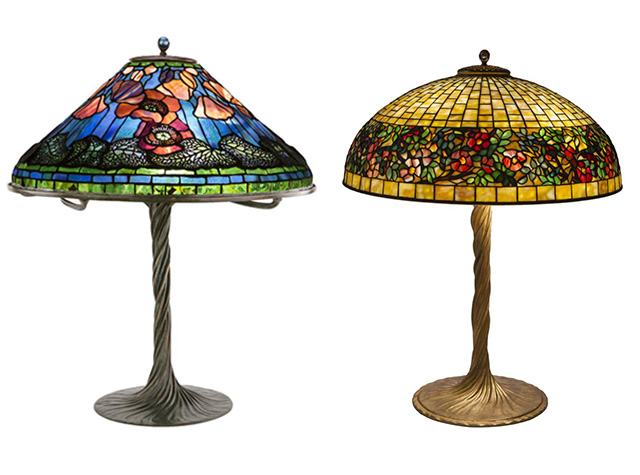 In the United States, Art Nouveau is sometimes called the Tiffany Style due to its close association with renowned 19th century designer Louis Comfort Tiffany. Tiffany lamps were designed with Venetian and Eastern influences that resulted in exquisite mosaic lamp shades. These leaded-glass lamps often featured designs and colors that perfectly aligned with the naturalism of Art Nouveau.

Émile Gallé was considered one of the preeminent Art Nouveau leaders in France. Gallé’s workshop revitalized the glass industry by incorporating experimental techniques and materials, like metallic foils, alongside floral motifs. The artist also founded the École de Nancy, a group dedicated to expanding the reach of Art Nouveau.

Antoni Gaudí’s name is synonymous with Art Nouveau in Barcelona, where his elaborate and extensive architectural projects are still present throughout the city. Construction on Gaudí’s most famous work, La Sagrada Familia, began in 1882 and is expected to be completed in 2026, 100 years after the death of the architect. The basilica is known for its unique combination of Gothic and Art Nouveau geometric forms and will eventually boast 18 spires, three facades, and a multitude of stained glass windows. Seven of Gaudí’s works, including La Sagrada Familia, are UNESCO World Heritage Sites. 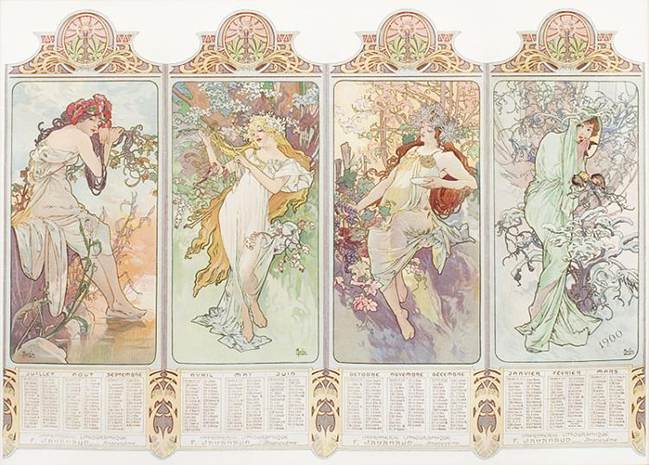 Illustrations and advertisements of the time were also greatly influenced by Art Nouveau. Most often, the subject of these images were women: surrounded by flowers, dancing, or in profile. Czech artist Alphonse Mucha created many of these iconic Art Nouveau works, choosing to feature women in flowing robes painted in pastel shades. While Mucha rejected the label of Art Nouveau, his works have become preeminent examples of the period.

Englishman Aubrey Beardsley was an illustrator and author inspired by Japanese woodcuts and the posters of Henri de Toulouse-Lautrec. While his work was darker and more grotesque than other Art Nouveau artists, Beardsley’s illustrations were used for many projects including a Parisian production of Oscar Wilde’s play Salome. Like Wilde, Beardsley possessed a derisive wit that he put to use drawing caricatures and political cartoons.

Gustav Klimt advocated for Art Nouveau in the city of Vienna after beginning his career as an acclaimed academic painter. Klimt was a founding member of the Vienna Secession movement, which included artists of many different styles, after which his works became less realistic and moved towards the movement and decorative qualities of Art Nouveau. His distinct style incorporates gold leaf elements among ornately decorated female nudes.

Despite their criticism of industrialization, designers of the movement often used modern materials like glass and wrought-iron. Creators experimented with glass to find new ways of filtering light and color. Cameo, stained glass, and iridescent favrile glass are mainstays of the movement in architecture and lighting.

Iron, which up to that point was merely a construction material to be concealed by adornment, began to be used by Art Nouveau artists as decoration. Curved iron appeared on balconies, in doorways, and on stairwells. Metal decoration in the form of vegetal or geometric shapes also became popular in silverware and lamps.

Jewelry designers of the period began to feature a wider variety of stones and favored opal, moonstone, and aquamarine. Like other art forms, jewelers relied on flora and fauna, especially dragonflies, as design elements.

Modern color printing technologies enabled artists to mass produce posters and illustrations for exhibitions and magazines, disseminating the style across the world. 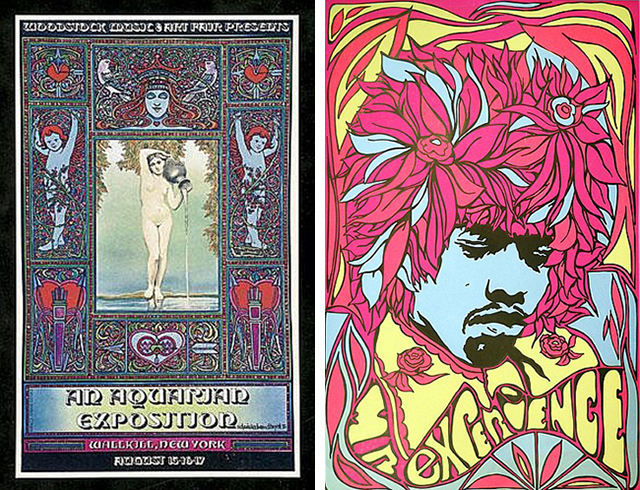 After WWI, the favoritism that Art Nouveau enjoyed in the early 20th century began to taper, though the movement’s lasting impression on the design community permeated the decades that followed. Designers such as Isamu Noguchi, Carlo Bugatti, and Verner Panton, prominent figures of the 1930s, 1940s and 1950s, were all influenced by the flowing, whimsical, and organic design elements of the movement. The counterculture movement of the 1960s also embraced the floral, organic nature of Art Nouveau, which is visible in the psychedelic designs of posters and album covers of the decade.

Today, tourists flock to Barcelona to see Gaudí’s powerful architectural triumphs, and to the Belvedere Museum in Vienna to see Gustav Klimt’s “The Kiss” (and many more masterworks by the artist). Collectors, too, see the value in works from the period. Prices for Tiffany lamps, for example, have achieved several million dollars at recent auctions.

Dive into the Art Nouveau movement with vases, clocks, glass and more up for offer on Invaluable.