As the subject of major museum exhibitions at Brooklyn Museum (2017) and Tate Modern (2016), Georgia O’Keeffe remains one of the most important painters of the 20th century, widely considered to be the spiritual ‘mother’ of American modernism.

Known for leading the early development of abstraction, her paintings are continually lauded for their photographic complexity and their exploration of transcendent American iconography. Fascinated by her elusive, ‘mystical’ presence, collectors remain drawn to the enigmatic status that her career sustains.

In 2014, her painting “Jimson Weed/White Flower No 1” (1932) sold at Sotheby’s for $44,405,000 (three times its $15 million estimate) making it the most expensive work sold at auction by a woman artist. In this monumental work O’Keeffe translates the pale blossom and leaves of the Jimson Weed into delicately simplified forms, exploring the intersection between abstraction and representation.

The Artist and Her Work

Born under the ‘big sky’ of Sun Prairie, Wisconsin in 1887, O’Keeffe developed an early affinity for the vast, rolling landscape that she would continue to explore throughout her career.

O’Keeffe eventually left Wisconsin to study at the School of the Art Institute of Chicago and the Arts Student League in New York. It was in New York where she produced a series of early charcoal drawings which gained the attention of Alfred Stieglitz, who in 1917 gave O’Keeffe her first solo exhibition. Her relationship with Stieglitz led to an important creative period, during which she began producing paintings of magnified flowers – approaching organic, non-human subjects and landscapes with an inwardly “human” emotional sensibility. 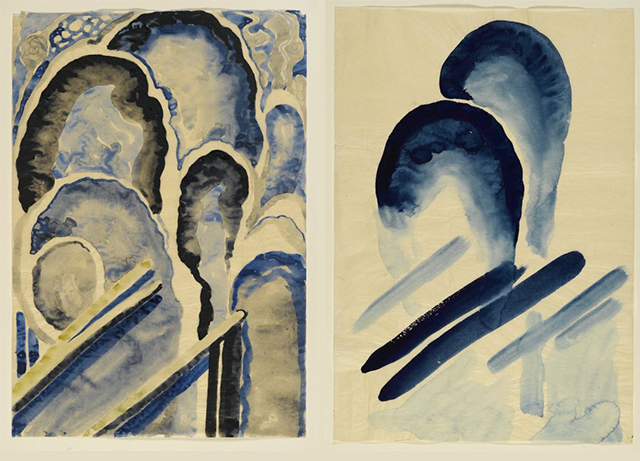 In 1929, O’Keeffe made her first trip to New Mexico, which would become her home until her death in 1986. Between the house near Abiquiu that she saved from desolation, and “Ghost Ranch,” O’Keeffe absorbed the barren plains of New Mexico into her paintings. Using her Model-A Ford as a mobile studio, O’Keeffe travelled extensively through the desert, painting en plein air in the scorched, solitary hills. Here, she embarked on a period of intense production, making paintings informed by vibrant red, ochre and yellow colors and otherworldly geological formations.

In works such as “Cow’s Skull: Red, White and Blue” (1931), O’Keeffe approached the subject of sun bleached animal bones, found scattered in the desert landscape with the same delicateness that she once gave to painting flowers. In these paintings, bones were not treated as a representation of death, as she once wrote, “The bones seem to cut sharply to the center of something that is keenly alive on the desert even though it is vast and empty and untouchable – and knows no kindness with all its beauty.”

Pursuing a transcendent approach to life and painting throughout her life, O’Keeffe’s mythical presence was aligned with high periods of productivity up until her death in 1986. With her distinctively stark, monochromatic clothing palette, O’Keeffe’s unique persona became inseparable from her reactionary artistic career. She lives on as an elusive, visionary pioneer of abstraction and an undisputed American icon.

The Artist in the Market 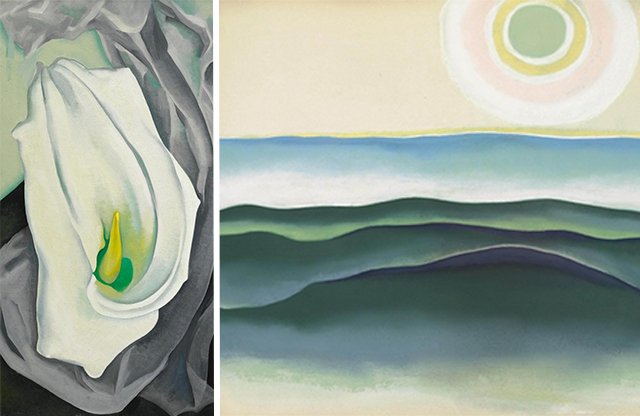 O’Keeffe’s paintings achieve consistently high prices at auction. “White Calla Lily” (1927) was a work that remained in O’Keeffe’s possession until her death in 1986, which sold at auction at Sotheby’s in 2015 for $8,986,000. O’Keeffe once questioned, “What is my experience of the flower if not color?” This work remains an important example of her floral studies made during the 1920s.

Although she is predominantly known for her paintings on canvas, O’Keeffe produced numerous works on paper, which are equally coveted. Exploring her lifelong preoccupation with vast landscapes, “Sun Water Maine” (1922) is an early work achieved with pastel on paper, which realized $2,210,500 at Christie’s in 2012.

Beyond paintings and works on paper, O’Keeffe’s prints present a more accessible price point for collectors. In this limited edition, numbered 84 of 175, O’Keeffe’s paintings are reproduced across 108 high quality plates and housed within a high quality black cloth clamshell box.

Collectors of O’Keeffe prints should observe edition numbers and be aware of unsigned prints, produced as exhibition posters, which despite their accessible appeal, are not technically artist prints. When purchasing unframed prints, collectors should take extra precautions when inspecting for handling marks and additional wear to the surface of the print.

On the hunt for O’Keeffe works and those of other pioneers of Modern art? Check out upcoming fine art auctions and pieces available now on Invaluable. The Complete Collector’s Guide to Prints