On March 12th, Freeman’s will hold its first Asian arts sale since September of 2015, a month that proved to spark international worry post the Chinese stock market crash. Still, Freeman’s sale did very strongly, and while it will be difficult to predict where their upcoming items will fall price-wise, Richard Cervantes, Vice President and Department Head of Asian Arts at Freeman’s, is confident this March auction will do well.

We spoke with Cervantes to get a behind-the-scenes look at some of the most exciting Asian art and antique pieces going under the hammer this Saturday, and find out why their fascinating stories are sure to yield a handful of bidding wars.

“What’s particularly interesting about works featured in the sale,” he says, “is that many items are of such a rare and unique nature that comparisons are often not available.”

That uniqueness, he adds, is characterized by each item’s provenance and historical significance. From an imperial Kangxi seal to a pair of Chinese porcelain vases previously owned by famous collector Heber Bishop, lots up for offer are truly extraordinary. 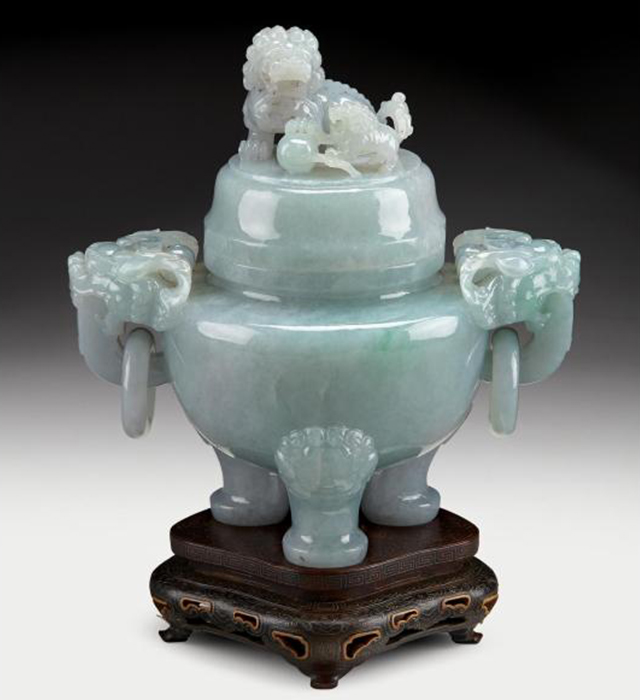 “This particular lot is not only remarkable because it evokes its period, which is right at the end of the Qing dynasty around 1890, but also because of the tone of the jade. Its jadeite is much more gem-like than nephrite and associated with later periods in Chinese history,” says Cervantes.

“This beautiful piece has large crossover appeal to all types of collectors. I consider this lot very saleable. It is of fine quality and has good provenance.”

In Pursuit of a Long Lost Match 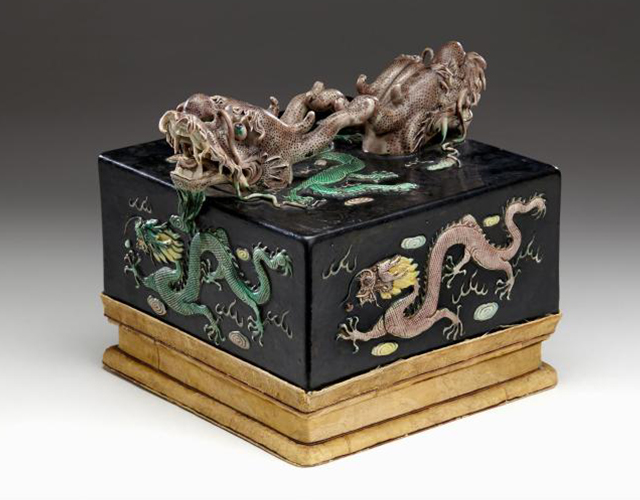 This Chinese imperial seal of Empress Xiaoyiren from the Kangxi period falls on the “unpredictable side” as far as how it will do at auction, says Cervantes.

“I’ve never seen anything quite like this; it’s such an unusual work. After looking through all of the auction archives I have access to, I can’t find something like it.”

For one, provenance plays a strong part with this lot, adds Cervantes. Accompanying the seal is a letter from a preeminent Chinese art scholar who attested to its authenticity and commented on its significance.

“This seal is also one of a pair, but we don’t know the fate of the other. It’s a mystery. But there is a chance, and it does happen, that the two will be reunited. It will be exciting to see if the other turns up.”

That would be a rather romantic thought, adds Cervantes, who further explained the story behind the seal. This particular seal was made for the Empress, and the other missing seal was made for her counterpart, the Kangxi Emperor of the Qing Dynasty. This seal is carved on the bottom with the mark of that Empress, who only held the title of Empress for one day.

“This particular Emperor was the longest reigning in Chinese history, and had two other Empresses who met similarly tragic ends; the notion is that he felt all of his Empresses were cursed. There is the conjecture that Empress Xiaoyiren was his favorite consort who raised his son, he refused to make her the official Empress with the fear that some tragedy would befall her. Sadly, she nonetheless became ill, and it was on her deathbed, when all hope was lost, that he finally made her an empress out of respect and love. She would then be remembered as such in the imperial court.”

Overall, Cervantes says, the provenance is very strong; there are expert voices from the past attesting to the seal’s authenticity. Being an imperial seal made of porcelain, it’s an object “so rare that we don’t know how the market will react to it.”

“The most important provenance we have associated with any lot in the sale is for two lots, 171 and 172. These are two pieces of porcelain from a very important 19th-century American collector named Heber Bishop.” 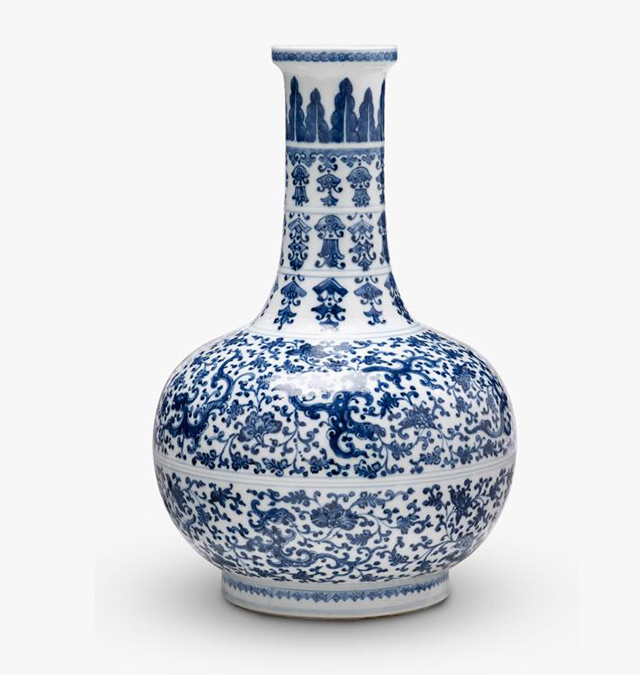 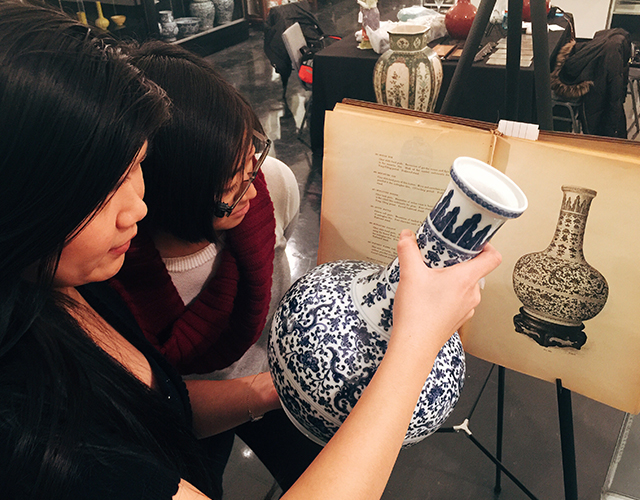 Freeman’s Lily Liu and Yue Xu examine one of the Heber vases to be offered in the March 12th auction.
Photo courtesy of Freeman’s 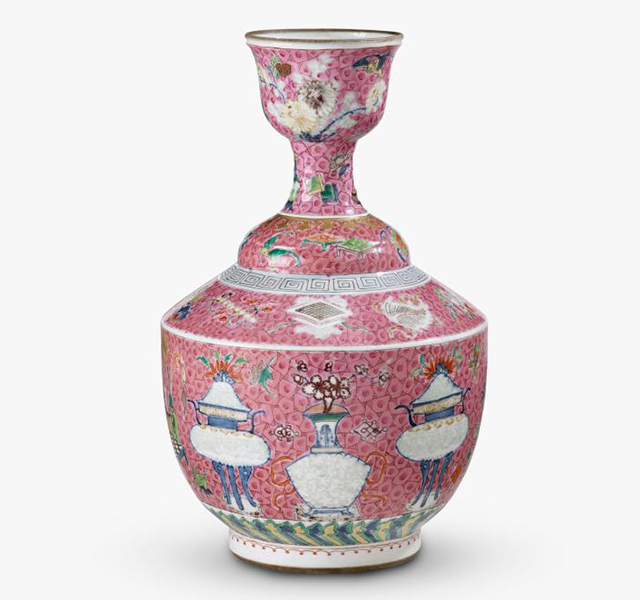 “During the Gilded Age that produced some of the great American industrialist millionaires – Carnegie, Vanderbilt, and others – there were some that collected art and antiques because it was fashionable, and then there were those who really took it seriously. Heber Bishop was regarded as one of the most serious collectors among the great American industrialists,” explains Cervantes.

Bishop is particularly famous when it comes to Chinese decorative arts; his collection of jades was donated to the Metropolitan Museum of Art, and is currently on display through June 2016. This, says Cervantes, is widely regarded as the most important single-owner collection of jades in the United States. Decorative arts tied to his name are considered to be of important provenance. 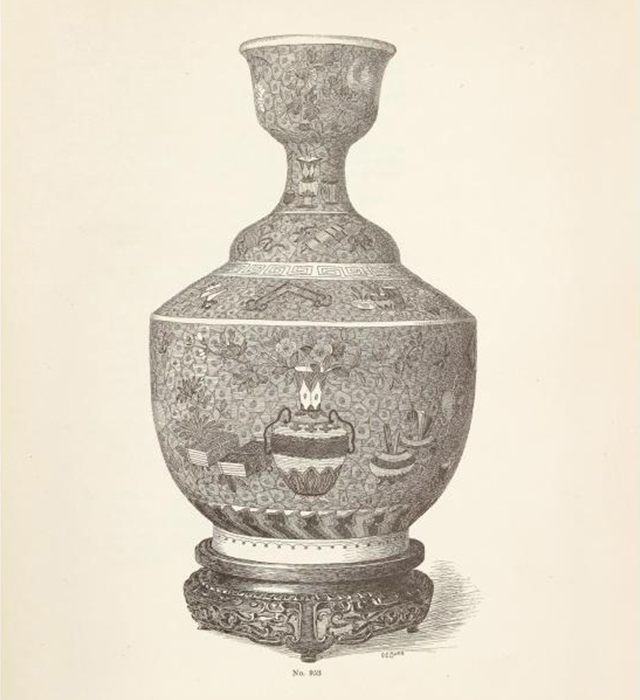 And to tie in a bit of auctioneering history, the illustrations accompanying these lots are from the original auction catalog, printed in 1906 after Bishop’s death in 1902.

“These were bought out of the estate by relatives – what a grand era of auctioneering back then; every single lot was hand illustrated,” says Cervantes. 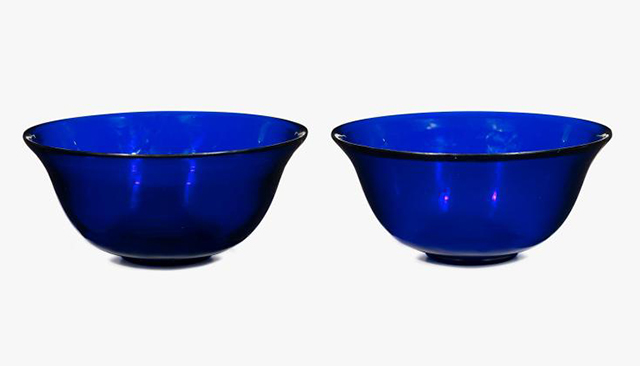 “One part of our sale that also has good potential is the glass section – lots 270 to 291. These are pieces of imperial glass from two important collections. Glass did surprisingly well in our last sale, and we anticipate the market also being there this March.”

“Of all the beautiful things produced in the imperial workshop in Beijing, glass has always been an atypical specialty and the market has been unpredictable and volatile. These are rare and fine pieces, and I have high hopes for them.”