Ballet and composition; film and score: for centuries, visual artists and musicians have shared and exchanged inspiration. Even language is often interchangeable between media – terms like “repetition,” “intensity,” “rhythm,” and “balance” can be used throughout the disciplines of music, painting, and theater.

Prominent examples of this exchange can be traced back to the 15th century. During the Italian Renaissance, Leonardo da Vinci designed musical instruments in addition to his study of painting, sculpture, and invention. In the 19th century, artist James McNeill Whistler often used musical terms to title his works, and his Nocturne series served as inspiration for French composer Claude Debussy’s piece, Trois Nocturnes. In the early 20th century, modern artists Pablo Picasso, Wassily Kandinsky, Marc Chagall, and Georgia O’Keefe also drew inspiration from music and the performing arts.

In the 1970s, graffiti artist Fab Five Freddy contributed much to the birth of the hip-hop movement, and was a frequent collaborator of art world icons Jean-Michel Basquiat, Keith Haring, and Andy Warhol. Warhol, too, became relevant to the contemporary music scene with iconic artwork for rock bands, The Velvet Underground and The Rolling Stones, and famed vocalist Diana Ross. Today, this symbiotic relationship between the disciplines of visual art and performing art is present in exhibitions at museums (the focus of the 2011 exhibition Dance/Draw at the Institute of Contemporary Art/Boston), individual works of art, and multidisciplinary collaborations.

As contemporary culture evolves with an increasing number of ways to connect across the globe, the line between the two disciplines is disappearing. To underscore the long exchange between the visual and performing arts, we’ve selected seven crossover collaborations from the past decade that punctuate the blurring boundaries between these once disparate disciplines. 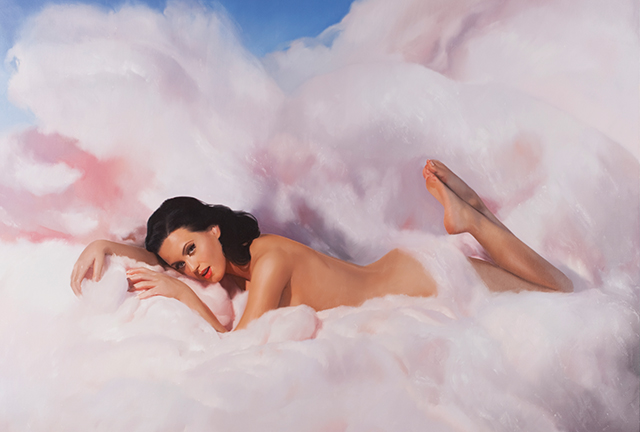 Contemporary artist Will Cotton incorporates candy, pastries, ice cream, and other decadent sweets into his surreal landscapes. In 2010, Cotton lent his signature style to Pop diva Katy Perry for the debut of her album Teenage Dream, designing the cover art in addition to creating a series of portraits inspired by the musician. Cotton also served as the artistic director for Perry’s music video for “California Gurls.” The album sold over 6 million copies and the music video has garnered over 362.5 million views on YouTube.

On the creative impact of the collaboration, Cotton said, “working with [Perry] was really a new experience for me. Before she came along, I had no interest in painting a recognizable person. But Katy had this kind of pop culture iconography that just seemed to me to fit into the kind of things I was already interested in painting about.” 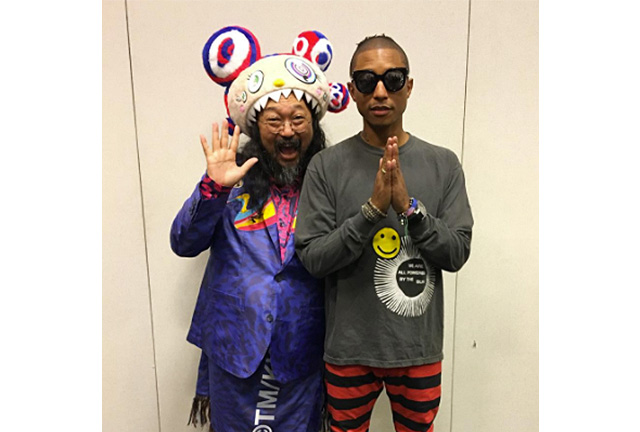 “I like your hat. Can I borrow your hat? I love your hat man. @takashipom”
[Pharrell Williams with Takashi Murakami at Complex Con].
Photo courtesy @pharrell, Instagram.

Longtime collaborators Pharrell Williams and Takashi Murakami have actually developed several projects together. Williams, a music producer and performer with ten Grammy Awards, and Murakami, a Japanese contemporary artist known for his his vibrantly colored compositions, worked together on a large scale, bejeweled sculpture titled Simple Things (2008-2009) that was exhibited at Art Basel in Miami in 2012. The sculpture reportedly sold from Emmanuel Perrotin’s booth for around $2 million.

The two also created a music video for Pharrell’s song “Last Night, Good Night (Re:Dialed)” in May 2014, the same year in which the performing artist curated the show GIRL for Galerie Perrotin in Paris. The song is inspired by and serves as the theme song to Murakami’s feature film, Jellyfish Eyes. Most recently, the duo worked together at ComplexCon, a cultural fair sponsored by Complex Media. Williams served as director and Chair of the host committee, and Murakami also designed the brand identity for the fair, which took place on November 5-6, 2016, in Long Beach, California. 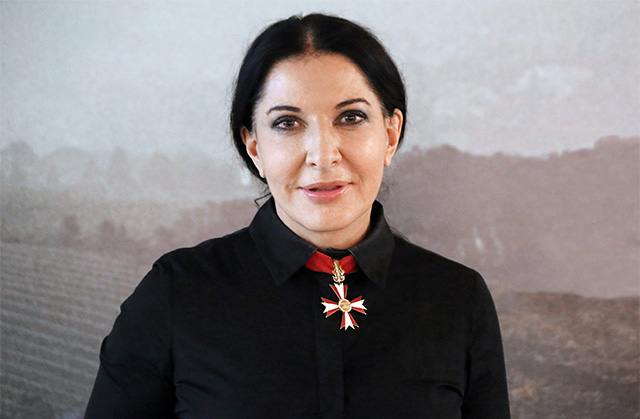 When discussing the project, Carter spoke to the close relationship between the visual art and hip-hop communities, stating, “if you think about those days when Fab Five Freddy was with Madonna and Basquiat and everything. We all went to those clubs, that’s when hip-hop was more underground. The arts and hip-hop really partied together. But when art started becoming part of the gallery, it was this separation. But we pretty much came up together.” 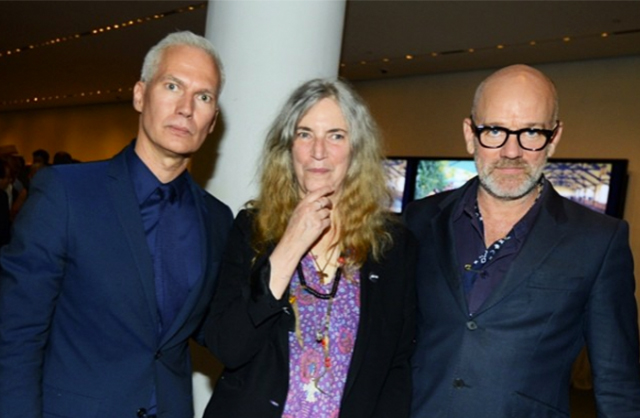 In the summer of 2014, MoMA PS1 sponsored the free public arts festival Rockaway! At Fort Tilden and Rockaway Beach, New York. The festival included a large-scale installation and photography exhibition called The Resilience of the Dreamer, conceived by singer-songwriter Patti Smith. Smith, an icon of the New York punk rock movement, is also a poet and visual artist. From 1967 to 1972 she also lived with American photographer Robert Mapplethorpe, whose photograph of her serves as the cover image on her first album, Horses.

Smith has lived in Rockaway, Queens since 2012 and established this partnership with PS1 as a way of celebrating the renewal of the community in the wake of destruction left by Hurricane Sandy. On the exhibition, Smith told the New York Times, “This is the transformative power of art…we’re making the space better than we found it, not just philosophically or poetically or spiritually better, but practically better.” 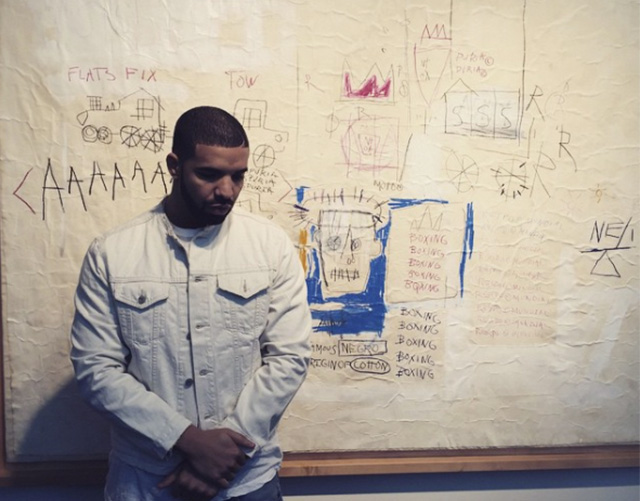 In 2015, hip-hop artist Drake collaborated with S|2, Sotheby’s gallery space and private sales division, for I Like It Like This, an exhibition of contemporary Black American art. He developed a soundtrack that paired works of art with musical recordings by hip-hop artists. The list of contemporary African-American artists featured in exhibition included Mark Bradford (paired with a recording by rapper Jadakiss), Theaster Gates (paired with hip-hop artists Jay Z and Kanye West) Lorna Simpson (paired with singer Rihanna), and Kara Walker (paired with singer-songwriter and instrumentalist Shuggie Otis). Visitors were encouraged to listen to Drake’s selections at sound stations throughout the galleries in an effort to facilitate dialogue.

On the collaboration, Sotheby’s said, “musicians rap about painters and commission artists to design their album covers: in the same vein artists look to music as inspiration for their paintings. Influences flow in both directions to create a fertile creative environment.” Drake explained, “for me it was just about being the bridge for this institution and kids who are into music. My goal was to try and not make both worlds seem so distant.” 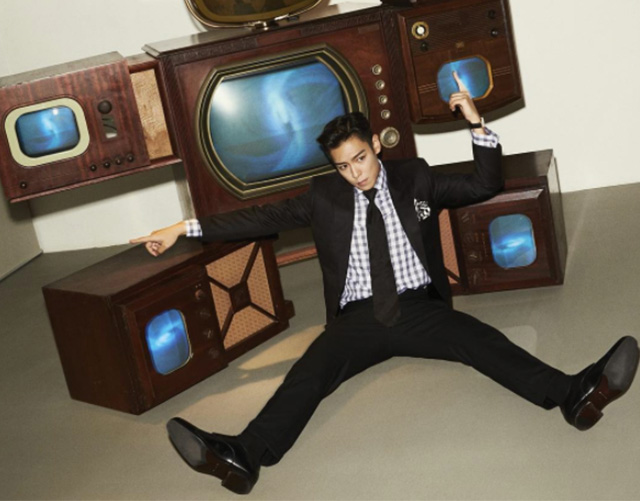 “Looking back at our #Bestof2016: This October, #SothebysHongKong was privileged to present a sale
guest-curated by Asian pop icon T.O.P. (@choiseunghyun_tttop). The #TTTOP auction set multiple
auction records, and realized HK$136 million / US$17.4 million – the highest total for a sale of western
Contemporary art ever held during a major auction series in Hong Kong. #SothebysContemporary.”
Photo courtesy @sothebys, Instagram. 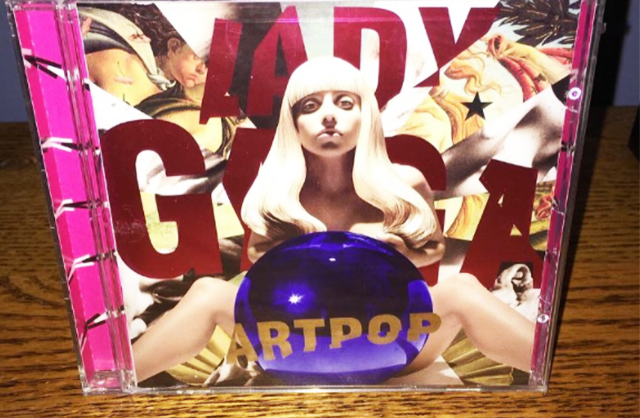 “One second I’m a Koons, then suddenly the Koons is me,” Lady Gaga sings on her song “Applause.” Indeed, the pop singer, fashion icon, and television star was transformed into a Jeff Koons sculpture for the cover of her album ARTPOP. Koons is a contemporary artist known for his pop sculptures of commercial objects such as balloon animals, vacuum cleaners, and basketballs. Gaga, who has also been involved with artist Marina Abramović, saw Koons’ Gazing Ball show at David Zwirner Gallery and was so inspired that she asked the artist to work on the album artwork for ARTPOP, which debuted at number one on the US Billboard 200 chart.

Whether pop musician, rock deity, or experimental songwriter, musicians from all genres continue to expand the possibilities of their body of work through innovative projects with museums, galleries, auction houses, painters, sculptors, and other branches of the art world. We look forward to seeing what innovative collaborations 2017 will bring.