All eyes are on Kentucky this week as Churchill Downs prepares to host the 142nd Kentucky Derby. Riding along with the Kentucky excitement this week, we took a closer look at Kentucky’s history – beyond the world of horse racing and into the world of Kentucky antiques, considered “hot” in today’s market.

Avid collector and Invaluable user Mack Cox, a go-to expert and frontrunner when it comes to collecting Kentucky art and antiques, gave us a window into a his museum-worthy collection, and revealed why he’s on a mission to make more people aware of the quality and importance of early Kentucky material.

Kentucky was the earliest area settled west of the Appalachian Mountains, and became the 15th state in 1792. While its decorative arts, particularly furniture, can be on par with Boston’s in terms of style, if you really know your material, Kentucky stands alone.

“Boston transitioned from Colonial to Federal America, but Kentucky was developed from the wilderness up entirely in the Federal era, so Kentucky material is purely early American,” says Cox.

Before 1820, Lexington, Kentucky was known as the “Athens of the West,” and was the economic and cultural center of the early American West. The center had Transylvania University, a public library, performing arts, newspapers, lots of book writings, and more. Up until the 1850s, the fertile soils and gentle topography of the Kentucky Bluegrass region were the breadbasket of the United States. The same lands produce some of the thoroughbred horses that will run in the Kentucky Derby.

“The rapid development and wealth from agriculture attracted cabinetmakers from throughout the United States and Europe,” says Cox. There were no established stylistic preferences in Kentucky so cabinetmakers produced furniture as they had learned elsewhere. This gave rise to a great diversity of furniture styles in Kentucky that emulate furniture produced in many American cities and Europe. The principal difference in Kentucky furniture was the use of native woods, especially cherry, as imported mahogany was exceedingly expensive to transport to the interior of a continent prior to steamboats.

Following the end of the Civil War, Southern styles of decorative art were perceived by many as primitive and lacking culture, says Cox, who indicated that it wasn’t until the 20th century that institutions like Colonial Williamsburg expressed interest in Southern material culture. 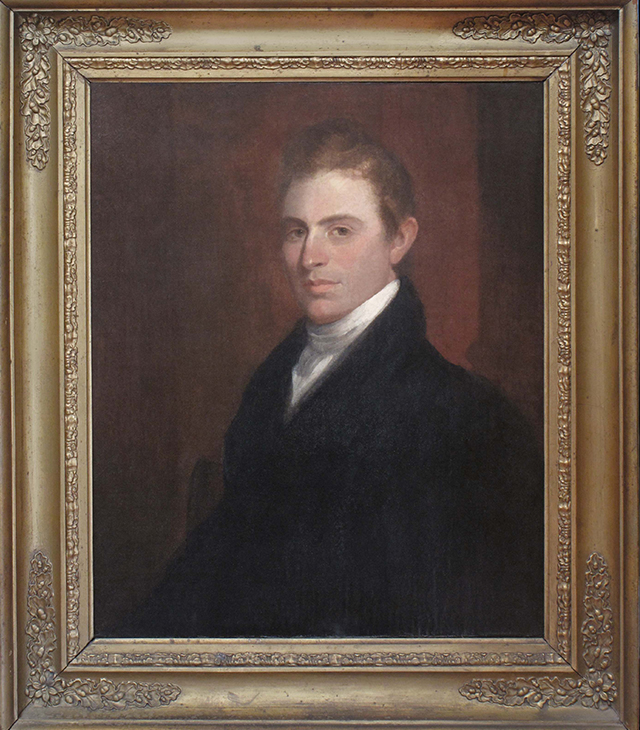 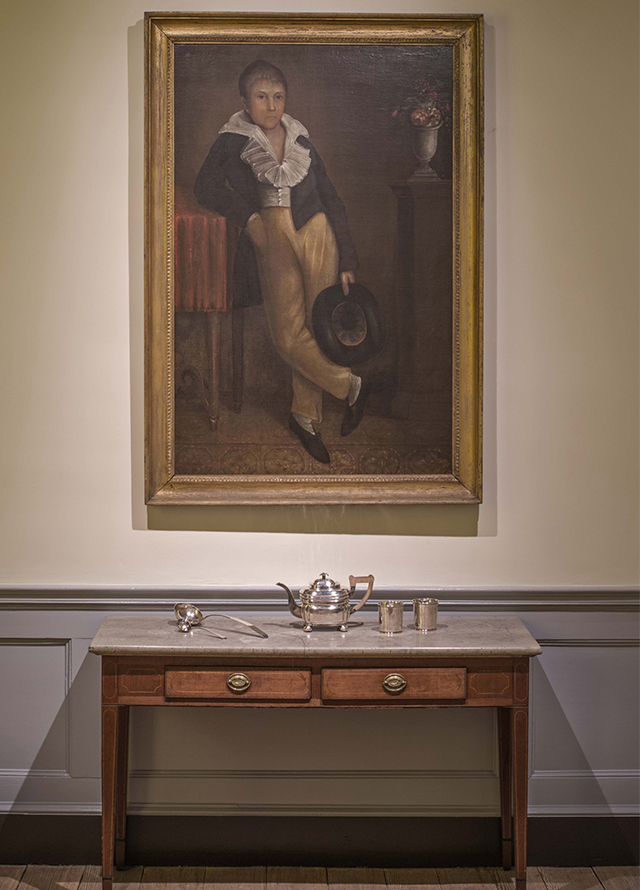 Portrait of James Clark Todd by Jacob Frymire, 1806, pictured above a Kentucky sideboard table with Kentucky River Marble, both pieces part of the Cox collection on loan to the Museum of Early Southern Decorative Arts (MESDA). Courtesy of MESDA, Winston-Salem, NC; photo taken by Mack Cox

“We also have certain examples of pottery, glass, early books and engravings, early newspapers and ephemera, textiles including samplers and coverlets, a dulcimer, and many other things,” he says. “I have no idea how many objects exactly, but we do not have a warehouse and limit acquisitions to what fits comfortably in our home. When we acquire something new, we typically sell something. That is becoming increasingly difficult as most things we have are important.” 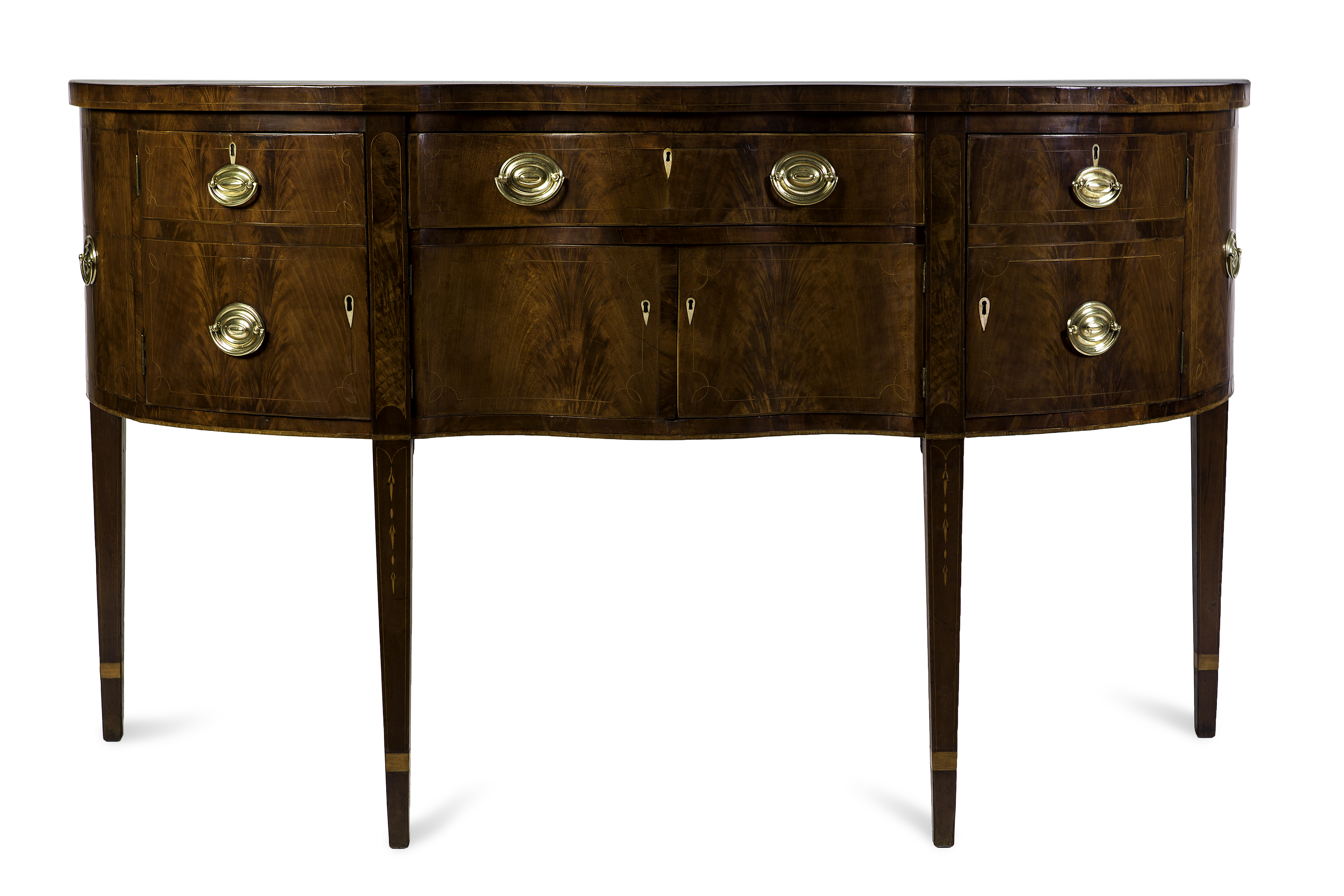 The Cox’s keep records of all things that sell related to Kentucky. They’ve been collectors for 15 years now, and they’re still doing research. They use their knowledge to help dealers and auction houses identify Kentucky works – or to help their collector friends snag the one-of-a-kind items the Cox’s don’t have room for in their own home. They also serve as advisors to MESDA, the Museum of Early Southern Decorative Arts. 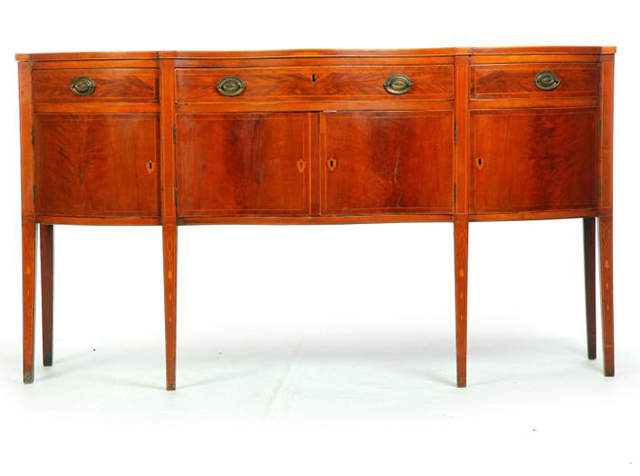 “In a given year, there may only be 1-2 fantastic Kentucky pieces that come to market, and seldom does that happen at auction,” says Cox. “For that reason, my wife and I wanted to develop an authentic and important Kentucky collection while researching, documenting, and educating the public.”

Their current goal, he adds, is to enhance their collection of “high style” Kentucky urban furniture made in Lexington, prior to 1820. “There are no public concentrations of such material and I am unaware of any significant private collections. Without the material, few can grasp what was going on in Lexington at that time. Imagine trying to explain early Boston, New York or Philadelphia with just one or two pieces of furniture.” 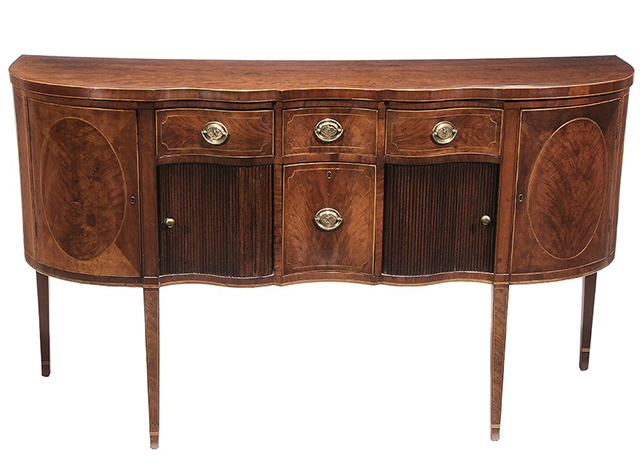 The Cox’s currently have over 12 pieces of “high style” Lexington furniture and are well capable of representing this important inland city. They desire Kentucky to be publically represented. Portions of their collection are presently on exhibit at MESDA (8 pieces), Colonial Williamsburg (2 pieces) and the Speed Art Museum (12 pieces). Cox has also lectured on Kentucky furniture at Colonial Williamsburg, MESDA and at various Kentucky venues. Their collection has also been featured in a book called, “Collecting Kentucky.”

What Kentucky Collectors Should Know

In the current market, says Cox, Kentucky antiques remain “hot.” There hasn’t been the price decline for Southern and Kentucky material like there has been for most antiques. Those who collect Southern and Kentucky material are “determined and capable.” Cox routinely uses Invaluable to find items, and while he may not always bid online, he takes note of which auction house these items are listed under. If he believes they’re important, he’ll ask for additional photos and often inspects the item in person or through an agent.

“Kentucky material often has a much tougher history than other places – there are lots more hiccups. You have to watch out for fakes and embellished pieces,” he says. High style Kentucky furniture, particularly from Lexington, often emulates furniture from eastern cities like Boston or Baltimore, or is copied from English design books (but with a “Kentucky accent,” says Cox). For that reason, Kentucky pieces are often misidentified to eastern cities

Cox keeps records of such fakes and is capable of identifying certain faker’s work based on traits. “Sugar chests are faked much more frequently and can also be difficult to identify. Fakers often buy period blanket chests and cut down into a sugar chest. One has to peer inside the dovetail joints to identify the fresh cuts and a certain chemical is used to oxidize the wood which has a particular odor. I’m aware of perhaps 40-50 such chests floating around. Contemporary fakes seem to originate out of the Nashville and Campbellsville, Kentucky regions, with some out of Ohio.” 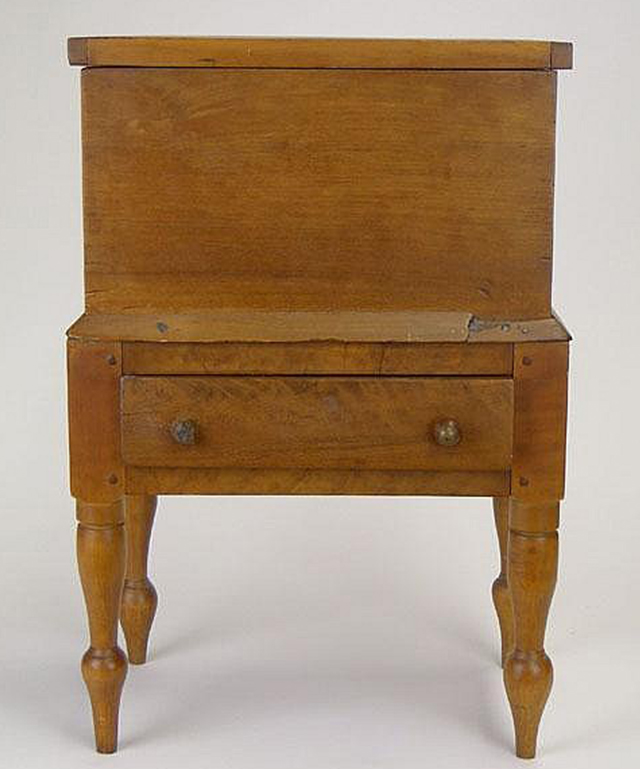 19th-century miniature sugar chest with drawer and turned legs, part of the Cox collection purchased from Kodner Galleries (April 2011) via Invaluable. A full size example by the same shop can be seen on the Speed Art Museum’s Kentucky Online Arts Resource by searching “2007.13.1”

While it is difficult to entirely avoid buying such pieces, as even the most renowned and trustworthy dealers and houses can sometimes get it wrong, Cox’s wants to close the gap between what’s unknown or misidentified and what’s known and rightly recorded.

“My best advice for new Ky collectors is to learn, learn, learn as much as possible. More importantly, obtain advice from a small handful of truly knowledgeable folks. Most often, items listed as Kentucky are really from western Pennsylvania or Shinnston, West Virginia where great quantities of vernacular inlaid furniture were produced and is sold inexpensively.” Antique Clocks: A Guide to Value, Styles and Proper Care