During this time of heated debates, political controversies, and an all-around sense of anxiety among the U.S. electorate, some of us might feel the urge to explore historic, fascinating presidential artifacts. Others may even feel inspired to start or add to an autograph collection, and honor those who have once dealt with the pressures and expectations that come with their very important role.

“There are autographs, and there are autographs,” says David Lowenherz, president of Lion Heart Autographs. For Lowenherz, who started his business as a dealer in 1977, the latter are autographs of great historical importance – not by Hollywood or sports figures, but by those who have greatly influenced and transformed art, history, literature, music, and science all over the globe.

The Greeks and Romans first started the tradition of autograph collecting, which later became popular in the 16th century. Much like we do today with our yearbooks in high school, German students of the 16th century would seek to add inscriptions from their professors or fellow students into their autograph albums. That, says Lowenherz, is why we have inscriptions by philosophers (and professors) like Johannes Kepler or Nicolaus Copernicus, who would inscribe these album books that their students carried with them to class.

Throughout history, figures like Queen Victoria, Teddy and Franklin D. Roosevelt, and German composer Johannes Brahms recognized the importance of collecting autographs. “It’s a long-storied tradition of collecting; a serious, unusual, niche market that has found appeal among many people in history, each of whom understood what the draw was,” says Lowenherz, who has customers from the U.S. Library of Congress, to corporations, avid collectors, and more.

Lion Heart Autographs’ “Presidential Letters, Free Franks & Speeches” auction (October 26) will focus on just that: presidential material. Timely as ever with the upcoming election, it’s also an area of interest among many new collectors, says Lowenherz. “Traditionally, autographs by U.S. presidents are the most popular area of manuscript and autograph collecting in the United States.”

The most interesting item in the sale, he notes, is the fragment from the first draft of George Washington’s first inaugural address that comes from an autograph and manuscript collector. “This is a part of the page of the original manuscript in Washington’s hand. Some of the quotes in it are quite apropos to the divisive nature of this year’s presidential election.” 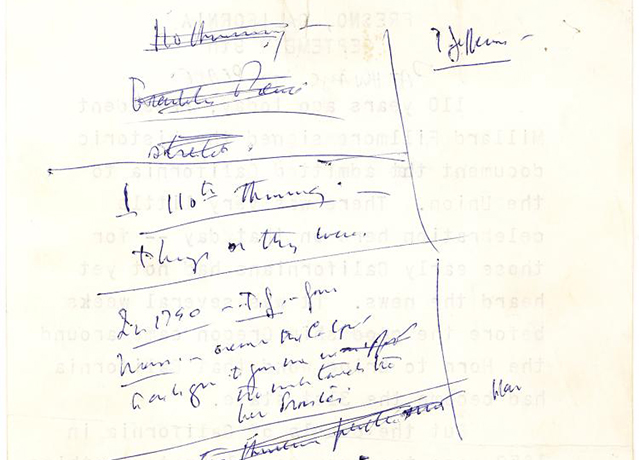 Also of particular importance is a handwritten page of notes that JFK wrote on the back of a speech given during the presidential campaign in California in 1960. “He mentions the slogan of his campaign, ‘The New Frontier.’ This, I suppose, was that year’s equivalent of ‘Make America Great Again.’” This significant artifact also comes with an interesting backstory. The father-in-law of the woman who consigned this piece, adds Lowenherz, was present at that very speech, and wanted to get an autograph. “Instead of handing the man an autograph, JFK gave him this page of notes.” 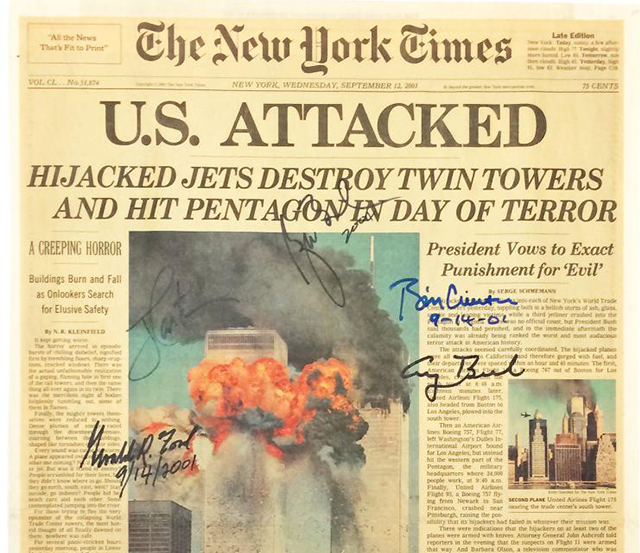 “A dramatic presidential item in this sale is the front page of the New York Times from September 12, 2001, the day after the September 11th attacks. The headline reads: ‘U.S. Attacked.’ The paper was presented to the U.S. presidents who attended the memorial service at the National Cathedral in Washington, D.C. It was signed by former Presidents Jimmy Carter, George H.W. Bush, Gerald Ford, and Bill Clinton. A few years later, President George W. Bush also signed it. The proceeds from the sale of this item will be donated to Tuesday’s Children, a charity that helps the children of the 9/11 victims.” 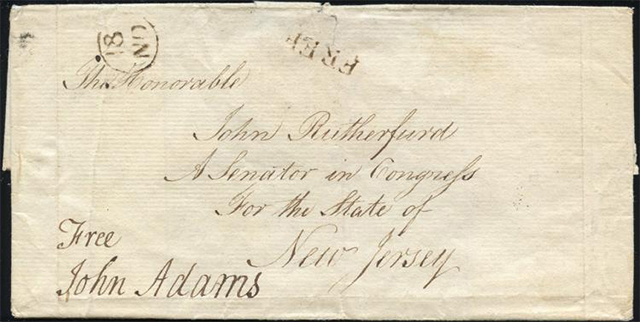 “We also have a collection of what are called presidential Free Franks. When you receive mail from your local congressman or senator, you’ll notice on the envelope in the upper right hand corner a facsimile of their signature. That’s called a ‘Free Frank’ – the senator or congressman has the right to send mail on official business through the U.S. mail service for free. This is a privilege that goes back all the way to Washington, and many U.S. presidents availed themselves of this service. We have original Free Franks of Thomas Jefferson, John Adams, James Madison, and more – there’s a whole collection of these being sold individually.” 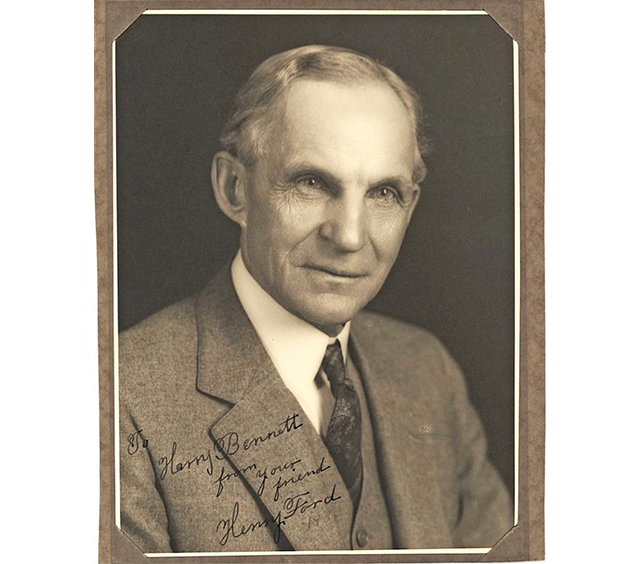 In addition to presidential items, the auction also features a number of interesting autographs that Lowenherz expects to far surpass their estimates. “One happens to be a signed photograph of Henry Ford, inscribed to a man by the name of Harry Bennett. Henry Ford was an anti-Unionist and did everything in his power to keep the unions out of automotive manufacturing. Henry Bennett was his enforcer – literally and figuratively. He had strikers beaten up and shot at, and had a rather unique personality.” 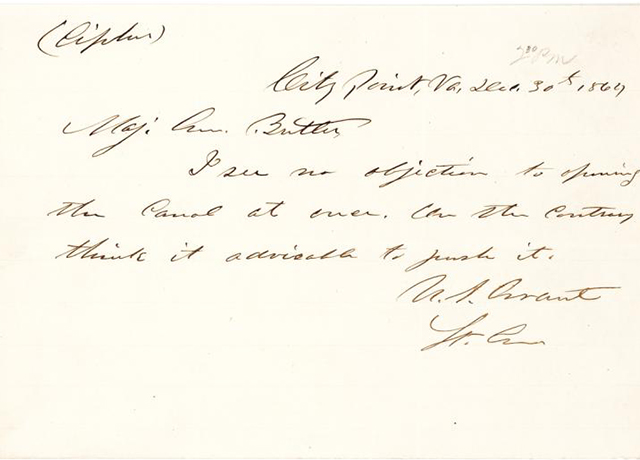 “This interesting Civil War telegram from Ulysses S. Grant, addressed to another general, giving him a particular order to carry out during the Civil War in 1864, will likely do well, as well as a letter by the inventor of the telegraph, Samuel F.B. Morse, who among other things writes, ‘If Lincoln is reelected, I shall despair.’”

What makes an autograph particularly valuable, says Lowenherz, is the content of the letter. “An autograph isn’t necessarily worth a lot just because it’s written or signed by George Washington,” he says. You can get something signed by Washington for as little as $5-6,000, or you can spend half a million or more dollars on something signed by him. “The content affects the price. A letter by Washington on U.S. foreign policy would be more valuable than a written invitation to tea.”

Then, he adds, there’s another stage: Collectors ask, is the letter written in a person’s own hand, or by a secretary and just signed by him? More desirable are letters written in the individual’s hand, which makes the autograph more expensive and harder to find.

“It’s really the stories that these items bring with them that drive interest and price,” he says. “Content that truly reflects the character of the person is key. It’s what’s so exciting. That line, for example, by Samuel F.B. Morse on his feelings if Lincoln was reelected is just are the kind of personal insights into the stories of these figures that is so wonderful.”

If you’re a buyer or collector of autographs, there are number of ways to preserve your collection. For those who frame their autographs, take precaution: use only acid-free materials for things like the matte or backing so the autograph isn’t damaged. Frames should also use UV3 plexiglass, which protects the documents from sunlight that could fade the ink. If you choose to use a sheet protector instead of a frame, says Lowenherz, be sure that those are also acid-free.

“Overall, autographs should be kept out of direct sunlight, in an environment that has little humidity, and if possible, away from dust. But otherwise, they are pretty durable.” For example, the document from Ferdinand & Isabella from 1494, also up for sale on October 26, “will last longer than anything you and I write on today’s paper,” he says. That’s because it was made on “rag paper,” or paper made from old cloths or rags. It’s supple, thick, free of any acid, and will last a long time. Paper today is mostly made from trees, which are highly acidic – in 30-40 years, it starts to dry up and crumble. Generally, says Lowenherz, the older the paper, the more stable it is.

But now that most of our communication is being done digitally, we ask: What types of autographs will people collecting in the future?

“So much is digital now and can quickly disappear. It makes the appeal of owning something written by a famous person, something you can hold and keep and cherish, a sort of talisman of the past that connects you physically to the person. There is something truly remarkable about holding a piece of paper that Abraham Lincoln signed.”

See more autographs by former U.S. presidents and other historical figures up for offer by Lion Heart Autographs in Presidential Letters, Free Franks & Speeches on October 26.