Dada or Dadaism was an art movement born from a reaction to capitalism, nationalism, and corrupt politics, which many believed resulted in the horrors of World War I. With modern, mechanized warfare as the backdrop, artists disenfranchised with society’s cold rationality used art to protest the establishment. In the words of poet Tristan Tzara, “The beginnings of Dada were not the beginnings of art, but of disgust.” Though the Dadaists shared no common creative style, they united to attack the artistic modes and social complacency at the core of a broken system.While the art market has traditionally viewed Dadaism as difficult to connect with, it represents a particularly vibrant period of reactionary art in which historically significant players – the likes of Duchamp, Picabia, or Man Ray, for example – can be purchased for far less than their more famous phases. Some may argue Dadaism may not present the same arresting visuals of Surrealism or later works; however, their importance to art history should not be undersold. 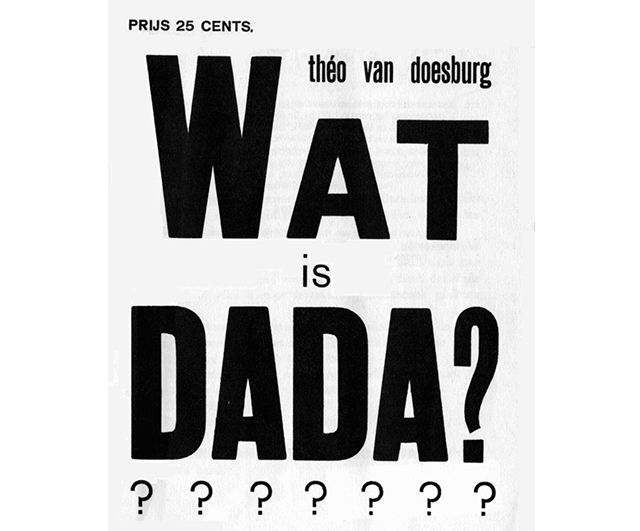 Cover of “Wat is Dada?” (What is Dada?) by Theo van Doesburg, 1923.
Image via Wikimedia Commons

Many exiles seeking safety from the military draught took refuge in Switzerland, and it was in Zurich on February 5th, 1916 that artists Hugo Ball and Emmy Hennings founded the Cabaret Voltaire. With the inclusion of artists Jean (Hans) Arp, Tristan Tzara, Marcel Janco and Richard Huelsenbeck, among others, Cabaret Voltaire was created to be an epicenter of artistic entertainment and expression. Part nightclub, part arts hub and all experimental, it was there the art movement – or anti-art movement, as it were – took hold.

Though the movement only lasted from 1916-1922, it quickly spread from Switzerland throughout Europe and to the U.S., marking a definitive shift away from art as decoration to art as protestation. Dadaism helped launch modern art as we know it, forever changing the course of artistic expression and how to answer the question of what is – and is not – art.

It’s time again for #SaturdayArtShare 3 artists every saturday! I’ve been doing a lot of collages lately so this week I decided to share three artists who inspire me that work with collage elements! The first artist is Hannah Hoch 1889-1978. She was an innovator of photomontage (collage using photographic imagery) and a member of the dada movement. Seemed fitting to share her work first ❤

What’s in a Name?

In a parallel fitting the absurdity of Dadaism itself, there are multiple stories as to the actual definition of the word “Dada.” Either purposefully chosen for its diversity of meanings across languages – “yes yes” in Russian and “hobbyhorse” in French, for example – or selected at random by plunging a knife into a dictionary, the very naming of the movement reflects a feeling of silliness, chaos, and freedom of interpretation. Embracing the inherent humor and irony of creating an art movement distinctly anti-art, the battle cry of Dada set out to break the silence of tradition, though the word “dada” itself is meaningless.

The Designers of Dada 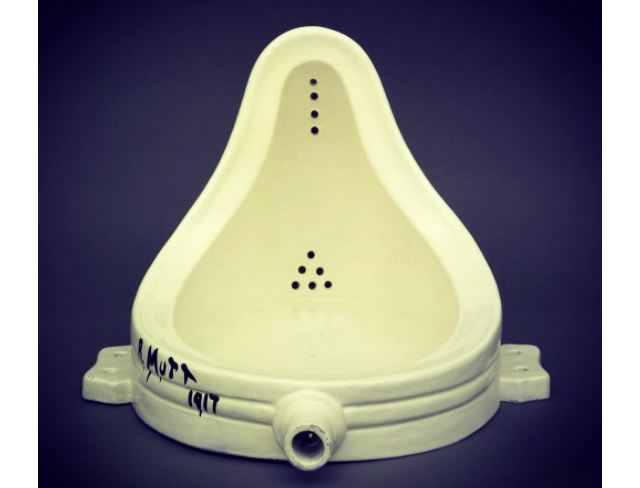 A conversation about the movement is incomplete without including the Daddy of Dada, Marcel Duchamp – though he might rightfully roll his eyes at the moniker now. The father of “Readymades,” objects mass-produced which he then signed and repurposed as “art,” in truth he never set out to redefine art in this way. Though he is well known for sparking the longstanding debate of how to define art, and thus changing the course of art forever, he described his work as having been created “with no intention other than unloading ideas” and as a “personal experiment.” Duchamp’s best known work, “Fountain,” a urinal he signed under the pseudonym “R.Mutt,” shocked art traditionalists everywhere. The piece suddenly rendered art anything and declared art making a process to be found in any form.

Though both Hugo Ball and Tristan Tzara produced seminal Dada works, their most famous is the Dada Manifesto. Spanning several years, with Ball writing in 1916 and Tzara in 1918, the manifesto touches on all things Dada as a treatise on the movement and its world. While both artist-authors elaborate on Dada’s goals and definitions, Ball and Tzara found themselves at odds with how to proceed in the message’s proliferation. Though both saw Dada as a pivotal way to shed traditional expression and thought, they disagreed as to whether spreading its gospel should be through word or action. While Ball favored pacifism and discussion, Tzara urged for action, advocating for the “abolition” of “every social hierarchy and equation set up for the sake of values by our valets.” Their disagreement as to Dada’s future finally came to a head in a confrontation, resulting in Ball’s departure from Zurich in 1917. From that point onward, Ball never again engaged as an active participant of the Dada effort. 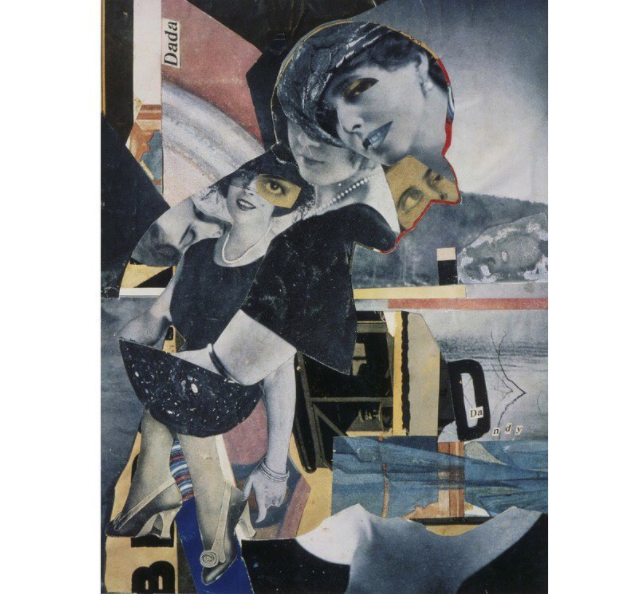 Born Anna Therese Johanne Höch, this German Dadaist is famous for her work as an originator of the photomontage. Her interest in prescribed social mores compelled her to incorporate feminist themes into her work, encouraging alterations to established gender roles. Despite their murmurings of women’s upward mobility, the male funders and founders of Dada hesitated to include females, and Höch was the sole woman in the Berlin contingency. Her work, Da-Dandy, plays with the idea of the gaze and a nonchalant attitude toward the female form. The central figure of a woman seems to twist before the viewer, creating movement and connection despite its two-dimensional surface. This layering invites the viewer’s eyes to wander and study the work and the woman, much the way the historical dandy’s interest fixes on the physique.

With a view to flout tradition through irrationality, ridiculousness and a strong stance against the staid predictability of bourgeois living, the Dadaists captured the fractured consciousness of a society at war through collage and photomontage. With a view to create art to affront rather than to appease, Dadaists subverted media consumed by the public daily like magazines and newspapers. Hannah Hoch’s photomontages were created by taking photographs or photographic reproductions from mass-produced media and pasting them into new and surreal formations. 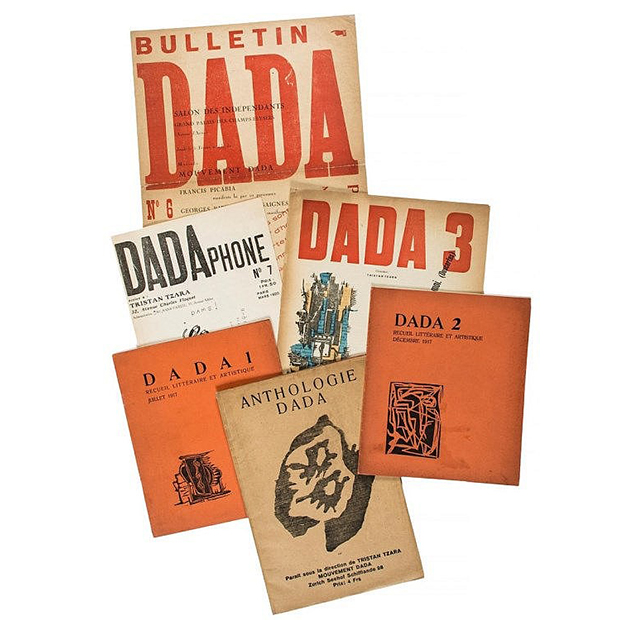 By repurposing original photographs in this way, Höch blurs the line between perception and reality, rendering the conventional picture otherworldly. Much the way Duchamp posed the question of what is or is not art, artist Kurt Schwitters included items in his assemblages that begged a discussion as to the value of art. By including lace, maps and trashed food wrappers and other detritus from his day trips in his works, Schwitters elevates the objects to “art.” Recycling items in this way challenged the definition of art as what was once reserved for the bourgeoisie’s delight into a powerful political commentary.

While the Dada Movement celebrated a brief but bright heyday between 1916-1922, it left its silly and satirical mark on art’s collective consciousness. While many of the Dadaists went on to participate in the Surrealist movement, it set off the charge for performance art, postmodernism and anti-art movements for decades to come. It’s most obvious offspring is the Neo-Dada movement of the 1960’s. Artists from Robert Rauschenberg to Jasper Johns used mass media and found objects to challenge art as commercialism and protest conformist thought like their Viennese forebears. In the 21st century, the bond to Dada is strong than ever, with clear ties to Pop art, Minimalism, and Conceptualism.

Looking for more? Find works by the greatest Dadaists now on Invaluable.