From the elegant homes of the ancient world to the storybook tale of Snow White, the jewelry box has been an object of attention for generations. At times equally opulent as the gems and baubles nested inside, the jewelry box can be its own work of art and thus makes a fantastic collector’s item.

The true beauty behind collecting jewelry boxes is that there are designs for all price points. For the lovers of sheer luxury, there are the elegant antique boxes from the beginning of the century – indeed, a silver Tiffany & Company jewelry box, circa 1939, sold at Christie’s New York for $138,000 in 2002. For the more budget-minded, the category of jewelry boxes also provides styles and designs that are equally compelling yet cost much less.

Below, we showcase some fantastic examples of jewelry boxes from the 20th century and encourage you to think “outside the box” to cultivate new ways to showcase these marvelous vessels as part of your décor. 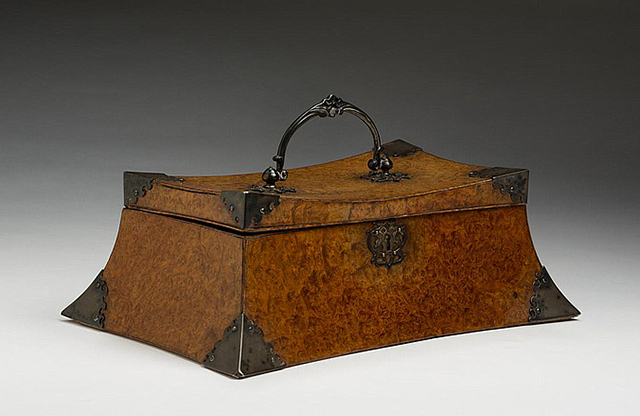 Though the jewelry box or casket was an ancient invention, it was at the dawn of the 20th century that the container came into popular celebrity. Thanks to the Industrial Revolution, more segments of the population could afford rings, necklaces, and other baubles, which meant the market for jewelry – and the boxes to hold them – exploded. Myriad designs flooded the market, from single-chambered boxes to more complex contraptions with mixed sizes of drawers and mirrored compartments. Added to these various shapes and sizes were an array of decorative styles.

One of the most popular styles of this early 20th century period was that of the Art Nouveau, an approach that celebrated materials and elements of the natural world. Rich wood tones, cameo glass, and inlaid patterns all came together to convey a sense of organic luxury. The energy of late 19th-century designers such as Emile Gallé inspired a host of Art Nouveau motifs from makers, such as N.B. Rogers and Jennings Brothers, for which contemporary figures clamored.

While these striking vessels can still hold jewels, they are equally compelling as a diminutive decoration in your abode.

Over the subsequent decades, the sinuous elegance and luxurious complexity of Art Nouveau designs remained popular, a style carried forward in early 20th-century designs emerging from Tiffany Studios. Through they had been in production since the late 19th century, it was in the 1910s that Tiffany Studios significantly amplified their range of jewelry box designs to include a wider array of styles.

At the same time, Art Deco, a chief competitor to the Art Nouveau, made its debut. A contrast to the organically meandering decadence of the Art Nouveau, Art Deco celebrated the striking nature of geometry by balancing that clarity with the opulence of rich materials, from inlaid or carved woods to highly-polished metals. These streamlined, sophisticated containers are both striking and sculptural in nature, making them useful today both as jewelry boxes and as stand-alone art objects for display.

The lavishness of jewelry box designs in the early 20th century was met with newfound austerity in the 1930s. World War I had limited access to essential materials, and the American Great Depression silenced the economy and swept the away the luxury and excess of the 1910s and 1920s. Despite more modest circumstances, jewelry remained popular, as did jewelry boxes, thanks to economic designs and new, cost-effective materials.

One such development was that of Bakelite. A plastic polymer developed by a Belgian scientist earlier in the century, Bakelite became an essential medium for glitzy baubles and their boxes. Bakelite designs play on the clean geometry of the Art Deco era while also being more cost effective. As a result, they continue to dazzle collectors today and are a great compliment to any mid-century modern or minimalist interior.

The streamlined styles of the Bakelite generation gave way to the full manifestation of mid-century modern design in the 1940s and 1950s. Epitomized by American designers Herman Miller and Paul McCobb and international teams such as the Danish duo A. Bender Madsen and Ejner Larsen, this style encompassed everything from lighting to seating to architecture. These designers followed the age-old adage “form follows function” and sought a straightforward yet stylish approach that eliminated the ornate or classicizing motifs of previous eras. Instead, they celebrated the beauty of simple geometry and bold color accents. As a testament to this utilitarian uniqueness of mid-century designs, often jewelry boxes and vanities of this era were directly integrated into larger pieces of furniture. This melding of elements made furnishings more versatile, an aspect that is still appreciated by mid-century modern fans today.

A more playful development in the 1940s and 1950s was the popularizing of the musical and the automaton jewelry box. This style had become popular in Europe as early as the 18th century with the creation of early cylinder-driven jewelry boxes, which activated with the simple wind of a key. At the same time, early automaton boxes, such as the French tabatière bird box, revealed the excitement possible with the inclusion of “dancing” or turning elements. Following World War II, the import of these European musical and automaton jewelry boxes to the United States inspired a wave of similar styles, particularly the iconic version for young girls that featured the dancing ballerina.

By the latter half of the 20th century, the key themes of earlier jewelry box designs had paved the way for a diverse array of styles. The classic engraved silver vessels akin to those popular at the dawn of the century met the modernist approaches and materials made popular during the 1960s and 1970s, resulting in a spectacular sampling of styles and decorative motifs. Of course, the perennial favorites continued to be popular. From the bold patterns of famed Italian designer Emilio Pucci to the iconic lines of Hermès, these designer jewelry box designs suggest that even the biggest designers were looking to contemporary culture for inspiration.

Since its earliest days, demand for jewelry boxes has not waned. A look at 20th-century jewelry box designs reveals that they are as much their own works of art as the earrings, rings, bracelets, and necklaces they contain. Whether you are an avid jewelry fan or simply looking for a compelling container or conversation starter, jewelry boxes are sure to satisfy.