Frieze Week, the crowning glory of London’s art fairs, is here. Comprised of Frieze London and Frieze Masters, the fair offers works from the world’s biggest and most respected galleries, as well as some of the most exciting up-and-coming galleries in this year’s “Focus” section.

For those who can’t make it to London, our editors have compiled some of this year’s biggest trends from the fair. Still can’t get enough? Quench your thirst for collecting with Frieze-inspired works up for offer on Invaluable this month. Read on for a peek at our editors’ fair roundup below. 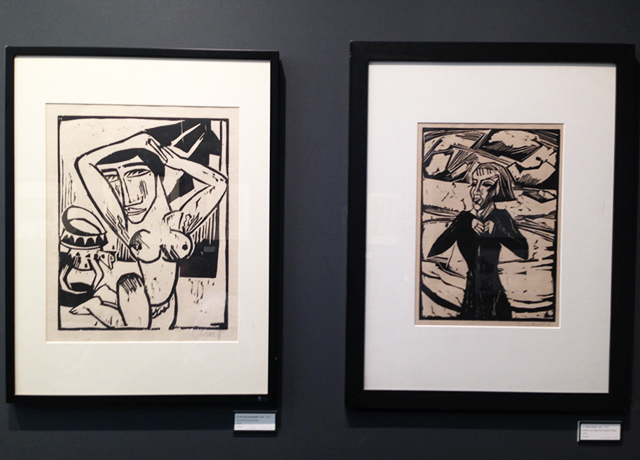 Frieze Masters exhibitor, Simon Theobald Gallery, showed a range of prints from the Die Brüke group, predecessor of German Expressionism. With a focus on woodblock prints by artists of the movement, Karl Schmidt-Rottluff and Erich Heckel, these examples soon up for offer are bold and expressive, even in black and white. Two works our editors are currently admiring: “Liegendes Kind (Dube V.II 79A)” by Erich Heckel, 1910 and “Die Sonne” by Karl Schmidt-Rottluff, 1914. 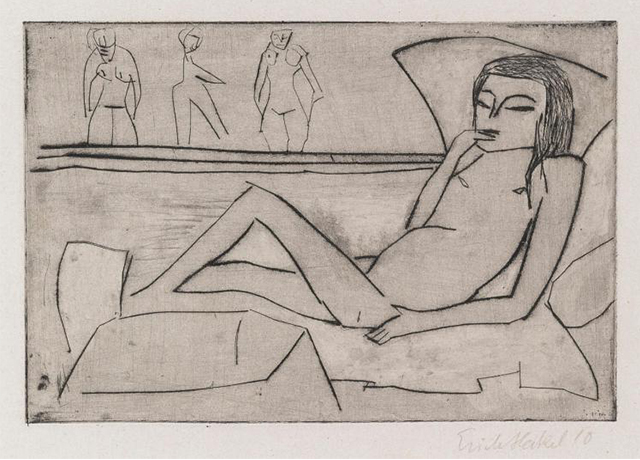 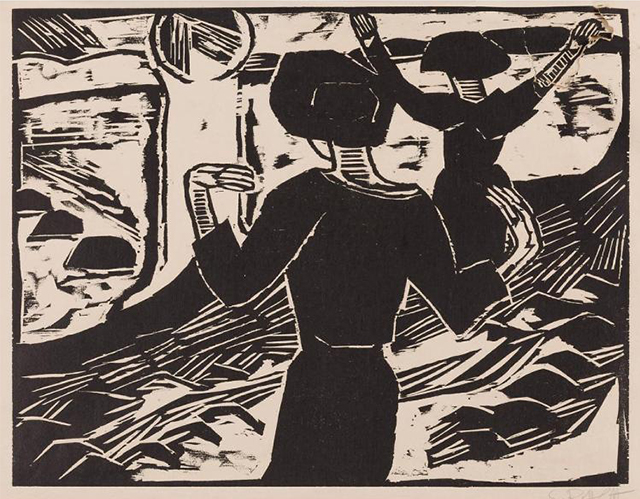 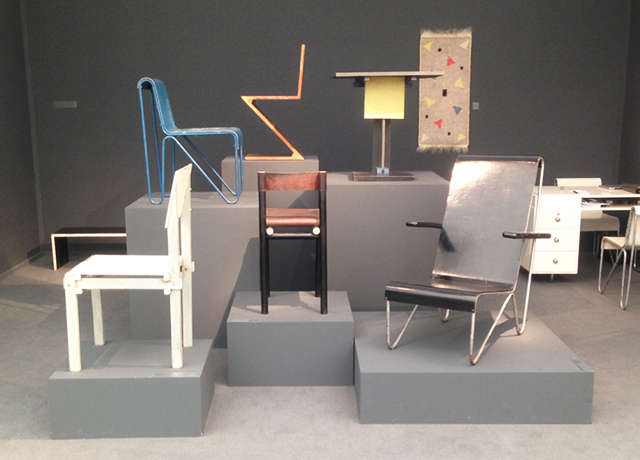 The Berlin Gallery Ulrich Fiedler presented works by Bauhaus greats like Theo Van Doesburg & Bart Van der Leck at Frieze Masters. True to the form-follows-function guiding principles of Bauhaus, each of the works on display serves a function, which complements its aesthetic appeal. Examples at the booth included stained glass windows by Van Doesburg and a small patterned carpet by Bart Van Der Leck. 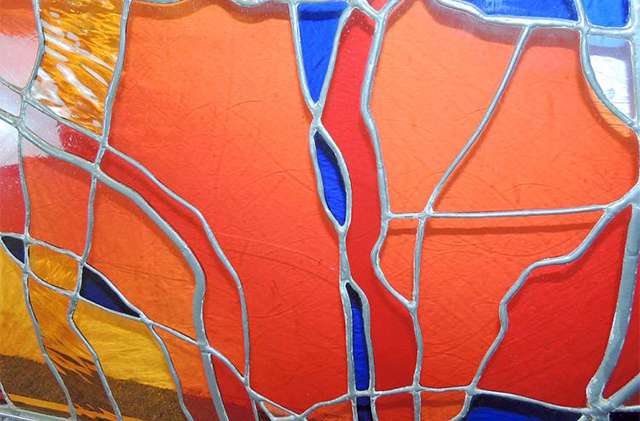 Inspired by Van Doesburg, our editors recommend this flowing, Modernist take on stained glass. Additional items of Bauhaus and Bauhaus-inspired furniture will also soon hit the auction block, including Marcel Breuer’s Wasily Chair and Thronet tables and the ever-popular chair designs by Charles and Ray Eames. 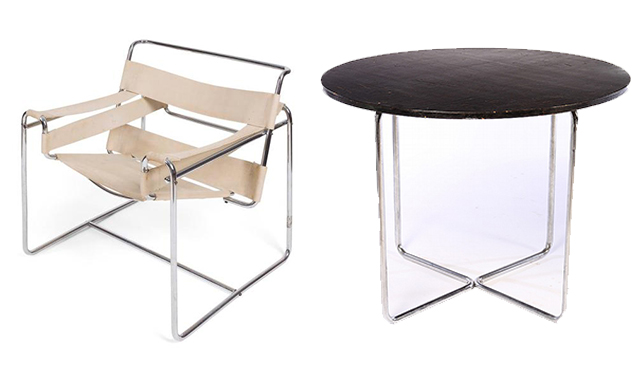 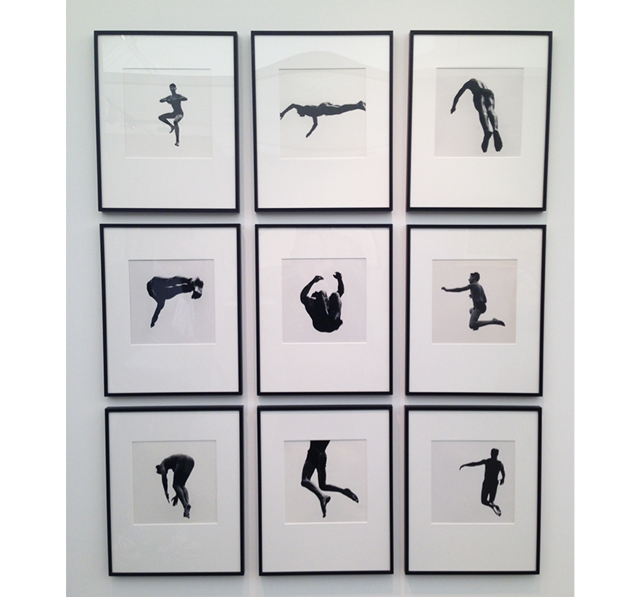 If you were inspired by the 2016 Tate exhibition “Performing for the Camera,” then the series “Pleasures and Terrors of Levitation” by Aaron Siskind, presented by Bruce Silverstein Gallery at Frieze Masters, captures the same exploratory playfulness. A photograph from this series is soon up for offer at Swann Auction Galleries. 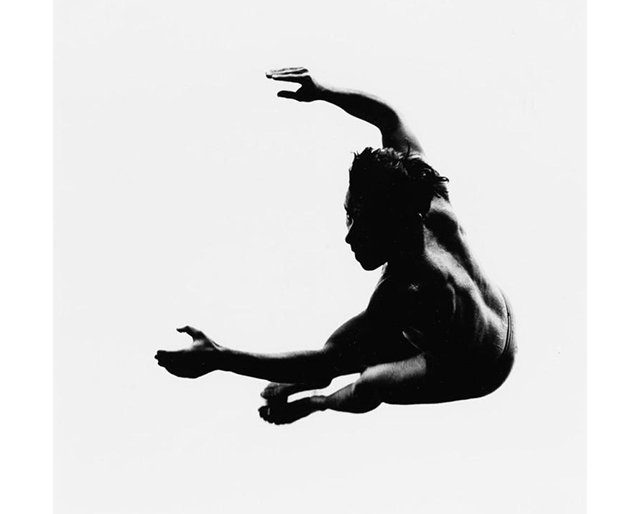 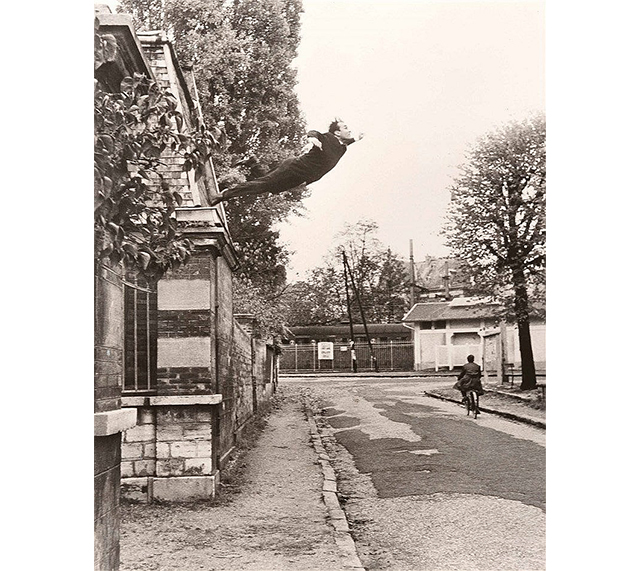 In the same vein, Yves Klein and Harry Shunk’s legendary photomontage, “Le Saut Dans Le Vide” (“Jumping into the Void”), has since been the subject of various reconstructions and evokes the same exuberance seen in Siskind’s work. 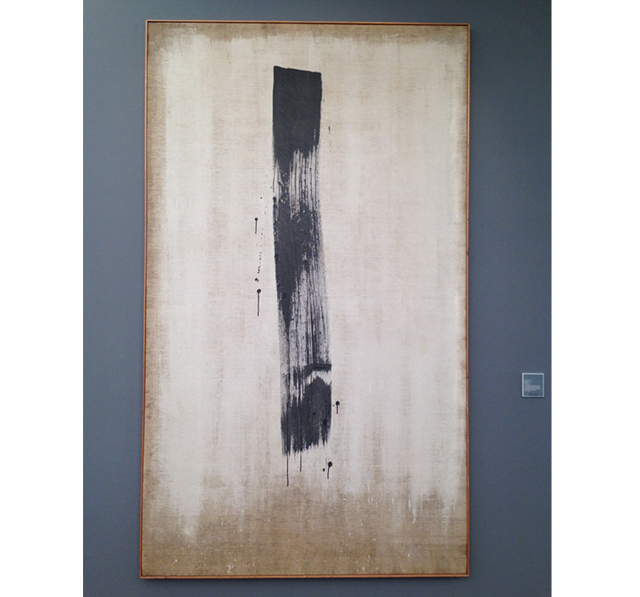 Popular French painter Jean Degottex’s minimalist, impactful work was presented by Galerie Meyer at Frieze Masters. The stark simplicity of a line that is both bold and delicate, graphic and painterly, set against the beauty of a canvas that is half exposed make this work a stunning collector’s item. Below, Abstract Expressionist Sam Francis creates a similar effect with bolder, brighter colors in his untitled work. 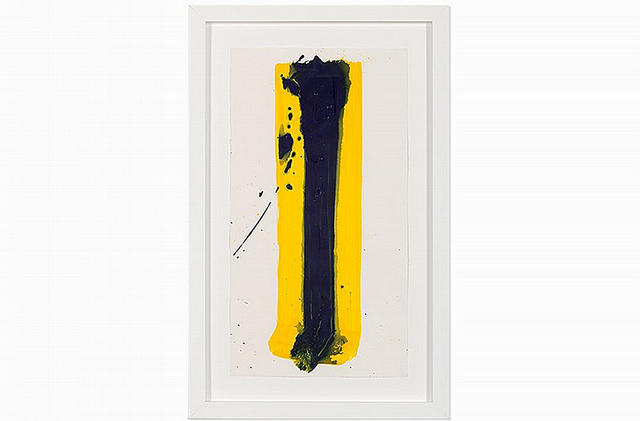 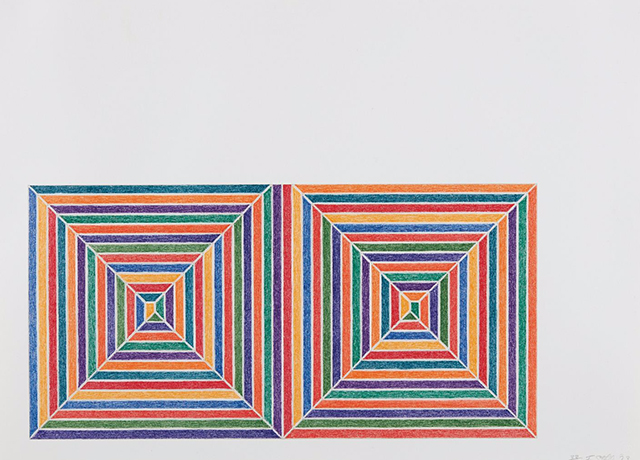 Three galleries at Frieze Masters (Marianne Boesky Gallery, Dominique Levy, and Spruth Magers) also presented works by one of the key artists in Geometric and Post-Painterly Abstraction, Frank Stella. Experimenting with illusion and perception, Stella’s non-representational work is widely popular among collectors and interior designers alike. Stella’s “Fontin de las Flores” reflects the research behind some of his best-known pieces.

For fans of modern sculpture with an abstract edge, gallery Jonathan Clark Art dedicated an entire space to the early pop artist Eduardo Paolozzi at Frieze Masters. Paolozzi’s sculptures were heavily influenced by the Brutalist and Cubist movements, with works on paper bridging the gap into more conventional Pop art. 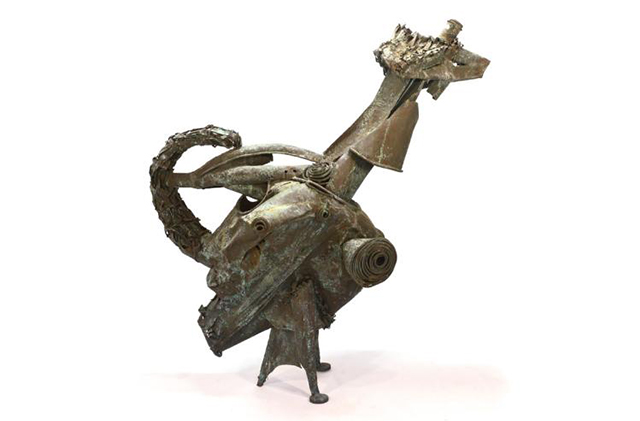 Above is a similar angular Brutalist sculptural form, “Chanticleer” by Fred Holschuh, made from salvaged materials. 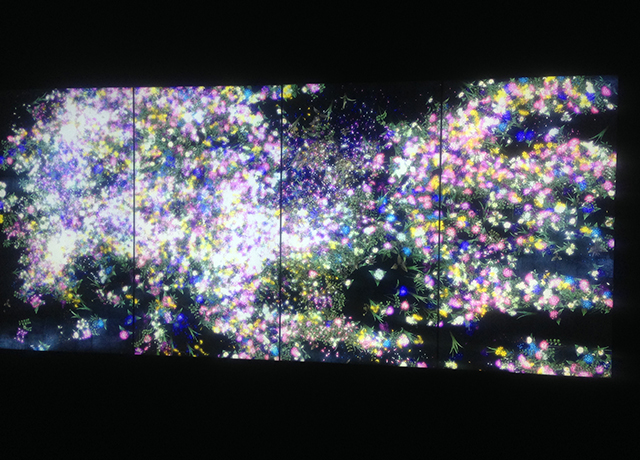 Frieze London offered a refreshingly modern take on the traditional floral still life. Pace Gallery, which is committed to facilitating the combination of artistic approaches with digital technologies, presented a range of beautiful and colorful installations. TeamLab’s work, “Flowers and People,” was a four-panel digital display with flowers that mesmerized by moving together and dispersing at random.

For other contemporary floral works, look to Takashi Murakami, whose “An Homage to Yves Klein, Multicolor C” also consists of four panels of bright flowers in a pop animation style. 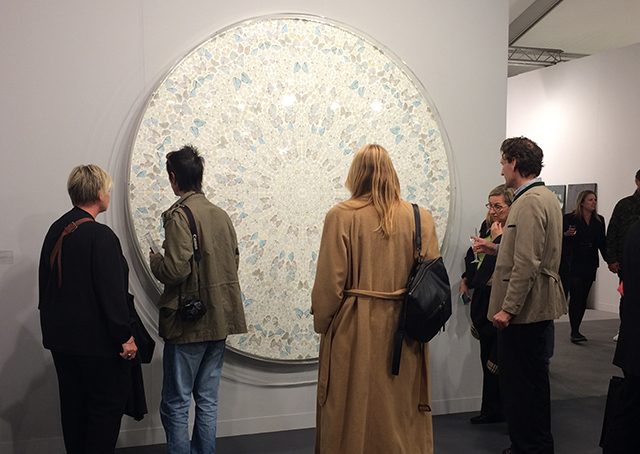 Stalwart of the London contemporary art scene and leader of the Young British Artists, Damien Hirst’s highly coveted works are consistently represented at the best fairs. The above kaleidoscopic collage of fragile pastel butterfly wings was presented by White Cube at Frieze London. 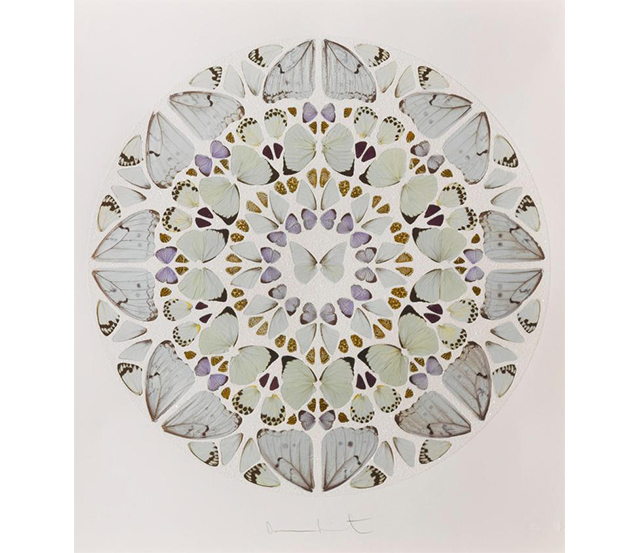 If you’re a devoted Hirst fan, full-color screenprints using diamond dust (representative of Hirst’s love of the lavish) are soon up for offer by Sotheby’s on Invaluable. The Ultimate Guide to Asia Week