Gracing the quarters of Queen Victoria to the tables of today, authentic Irish Belleek china exudes an unrivaled delicacy. Belleek is a beloved collector’s item in the contemporary market thanks to both its brilliant beauty and fascinating legacy that traces back to one of the darkest moments in Irish history.

Belleek china can sell from anywhere between $500 to $10,000 and beyond. Prices vary based on quality, rarity, and the period in which the piece was made.

In 1845, Ireland plunged into the Great Famine, a period of crisis that lingered for nearly a decade and changed the very fabric of Irish culture. From the depths of this destitution, though, rose nobleman John Caldwell, who offered Irish industry a glimmering light of hope. Caldwell deduced that his estate’s locale in the rural hamlet of Belleek in County Fermanagh, Ireland, proved perfect for ceramic production. Thus, the Belleek brand was born, and it rose to acclaim with remarkable speed following its appearance at the 1864 Dublin Exhibition. The following decade at that same exhibition, Belleek wares caught the eye of England’s Queen Victoria, who subsequently ordered her own service by the makers.

By the turn of the century the company had shifted its focus to pearly white Parian porcelain, so named for its smooth finish akin to the luminous marble from ancient Paros, Greece. Belleek complemented this finish with richly intricate patterns in their designs of the late 19th and early 20th century. Such technical versatility was crucial, for instance, for the celebrated Belleek basket tradition that began in 1865.

Belleek’s international business was booming by the early decades of the 1900s, so much so that American porcelain companies tried to emulate the Irish factory’s ingenuity (these “American Belleek” producers were eventually drummed out of business). As time marched on, the hand craftsmanship that had been credited to the brand for generations began to fade. This led to the eventual sale of the company and subsequent amalgamation of the remnants of Belleek into a giftware brand conglomerate in the 1990s. Nevertheless, antique Belleek china still exudes that beauty and brilliance that ushered the brand into acclaim, and they come with the added benefit of collection options across price points.

Antique Belleek pieces are booming today on the collector’s market thanks to this rich heritage of Irish artistry. Beloved by porcelain fans for their Parian-perfect finish and intricate detail work, Belleek pieces come in a range of motifs to satisfy any style or budget. Today’s market trends also suggest that Belleek marks matter: those pieces bearing the brand’s oldest maker’s marks, known among collectors as “Black Mark Belleek,” can achieve record high prices; specimens, such as those from the later eras of the Green and Gold Mark Belleek, appear at more modest prices but are equally modeled with Belleek beauty in mind.

Below is a list of realized prices for Belleek from the Invaluable price database that highlights some of the most characteristic examples in a range of styles from the most valuable to the most accessible. 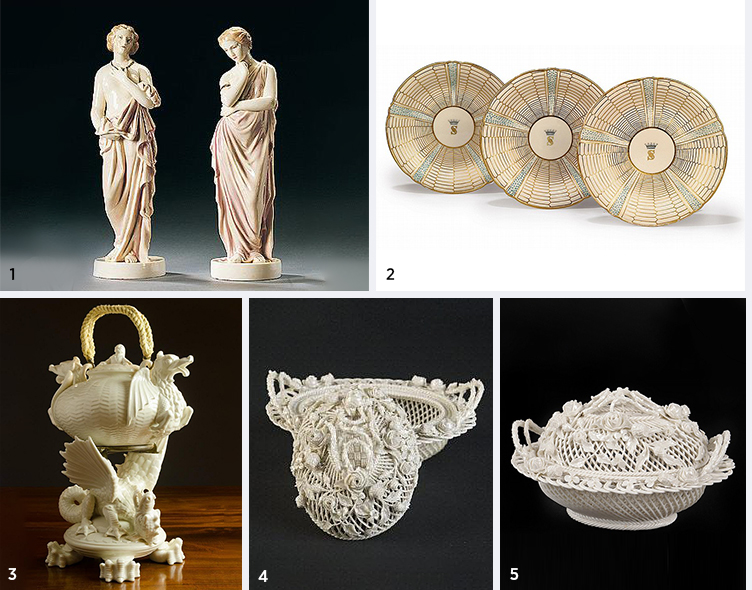 Pieces of Belleek china have been chronicled with various marks throughout the years – indeed, Belleek is currently on its fifteenth mark. The most coveted of these marks, though, is undoubtedly the “Black Mark,” the first mark used by the brand. It featured an arched ribbon banner bearing the name “Belleek” in capital letters that enveloped symbols of Ireland, including shamrocks, an Irish wolfhound, a harp, and the profile of the Round Tower of County Fermanagh.

The Black Mark can be further subdivided into three periods of production. The First Period, which incorporated production from 1891 to 1926, includes accordingly some of the most coveted – and thus expensive – Belleek piece on the market today.

1: Pair of Colored and Glazed Figures of “Meditation” and “Affection” 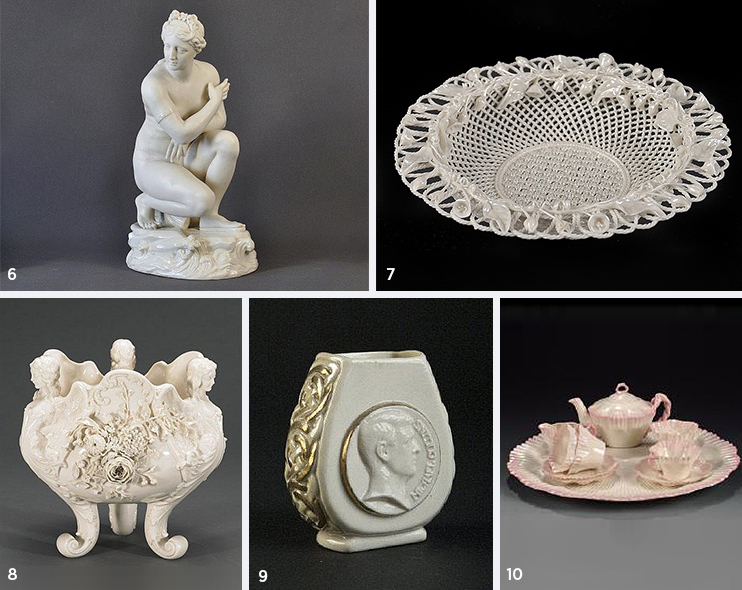 The Second Period of Belleek’s Black Mark spanned 1891 to 1926. It is distinct from the First Period Black Mark in that it has the added text “Co. Fermanagh, Ireland” in another ribbon banner that wraps around the original Black Mark seal. This addition was made to ensure compliance with contemporary tariff laws, such as the 1891 McKinley Tarriff Act, that mandated that a product’s country of origin had to specified. No less splendid than their First Period predecessors, Second Period Black Mark Belleek china exudes the same brilliance of design but can be acquired at somewhat more accessible prices. 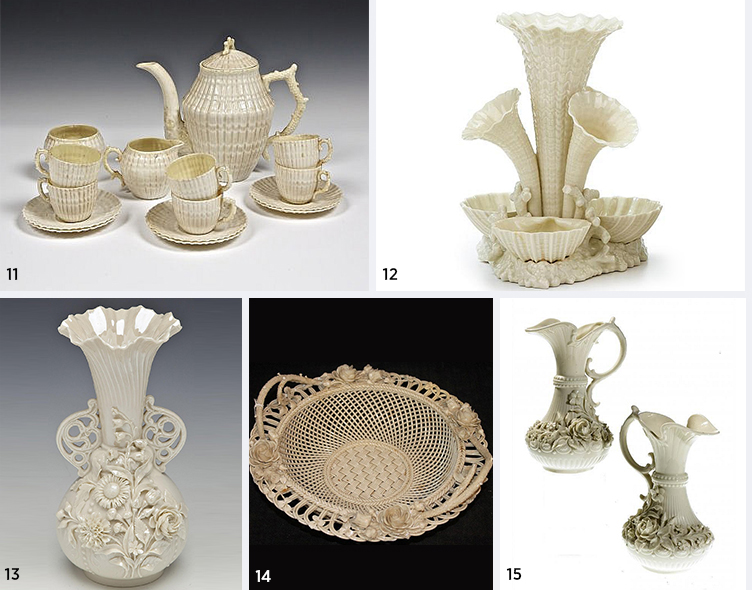 The Black Mark Third Period was ushered in with the debut of the new mark at the 1926 Wembley Exhibition and continued to be used until 1946. This mark was updated to include the Celtic phrase “Deanta in Eirinn,” or “Made in Ireland,” which wrapped in script around a circular cartouche featuring a Celtic knot. One will also find the addition of the company’s registry mark, “REG No 0857” included. The most modern of Black Mark Belleek examples, Third Period pieces reflect the ongoing tradition of craftsmanship as well as the company’s response to contemporary trends. This was the era, for instance, of Belleek’s incredibly popular Shamrock line, a motif featured across decorative wares as well as table services.