Truly ceramic ware fit for a king, Sèvres has always been a name synonymous with expert craftsmanship and delicate details. As a result, Sèvres porcelain has held a captivated cache of collectors for generations and garners generous prices at auction. Today, significant Sèvres and Sèvres-style pieces can sell within the range of $4,000 to $8,000, but exceptional pieces can go much higher: Sotheby’s sale of an incredibly rare Sèvres gilt bronze and deep violet porcelain ovoïde once owned by King Alfonso XII of Spain sold in 2011 for more than $175,000. Such high prices reflect the impeccable quality and artistic legacy of the Sèvres brand that dates back to the days of French King Louis XV.

The story of Sèvres started with an ambitious pair of brothers who, working under license from the French king, launched their own porcelain production at the Chateau de Vincennes in the mid-1740s. Their specialty was soft paste frit-porcelain, a method that allowed for elegant and colorful designs thanks to the low firing temperature needed to finish the piece. The sheer beauty of these early designs – and the immense cost and labor afforded each piece – convinced the king to assume a quarter of the company’s interest in 1751. Seven years later, Louis XV assumed 100 percent ownership to ensure that both the brilliance and exclusivity of Sèvres designs would continue. It was during this takeover that the company moved production to Sèvres, the rumor being that this move was made to bring production closer to the king and his mistress, Madame du Pompadour, who had long adored the company’s ceramics.

Over the remainder of the 18th century, the acclaim for Sèvres pieces grew exponentially, thanks to its ties to the French king, but also thanks to its unsurpassed quality and beauty. By the dawn of the subsequent century, though, this success subsided as political upheavals and outside competition threatened Sèvres’ survival. When the company became the possession of the French government in 1798, its future was uncertain, but the deft leadership of a new director guided Sèvres into its next era of success. Prolonging their status as a symbol of taste and luxury, Sèvres maintained an illustrious clientele, including figures such as the Emperor Napoleon Bonaparte. At the same time, though, Sèvres’ new management introduced new designs for a wider range of society that still adhered to their high standard for porcelain production.

Though Sèvres porcelain is still in production today, it no longer conjures the rich motifs and delectable designs for which it was renowned in centuries past. Since the company’s reorganization in 2009, the focus is on more utilitarian porcelain wares. The Sèvres benchmark for quality, though, remains unmoved, and the reputation remains unsullied. So, to own an antique Sèvres piece is to own a beautiful piece of the past. Recent market trends suggest that collectors’ passion for the past has pushed the prices of Sèvres and certain “style of” pieces increasingly higher, so to get a spot at the Sèvres collectors’ table means an increasingly high buy-in. Below is a list of realized prices for Sèvres and Sèvres-style porcelain from the Invaluable price database that highlights some of the most characteristic examples of the celebrated ceramics company. 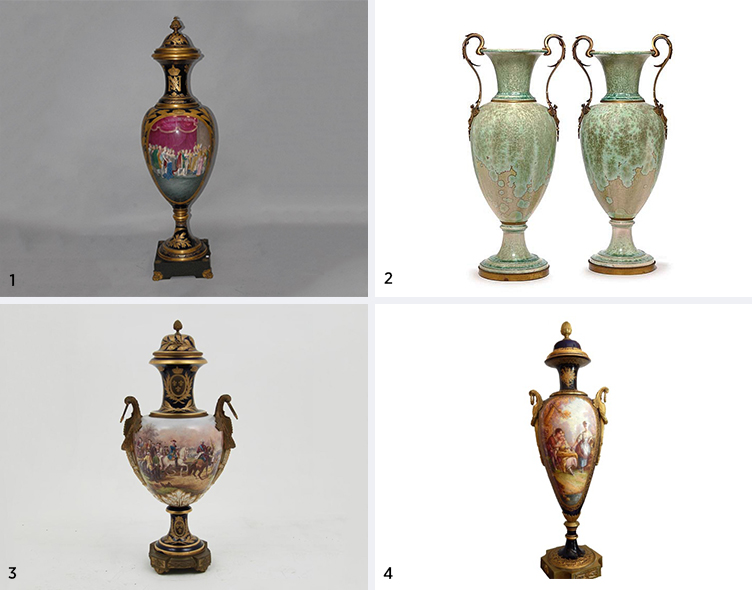 Sèvres vases and urns are undoubtedly some of the company’s most iconic forms. Channeling the ancient world by assuming the subtle curved shape of the Classical amphora, Sèvres vases and urns feature brilliantly painted scenes in circular or ovoid cartouches enveloped in gold accents and vibrant hues ranging from bright turquoise and deep cobalt to delicate rose. Many other makers attempted to copy Sèvres’ iconic styles, making it essential for today’s collector to be knowledgeable of maker’s marks. Authentic Sèvres pieces from the 18th century will bear the “LL,” a reference to Louis XV, often alongside a cypher letter between “A” and “Z” that indicates the year of production. From 1793-1814, the “LL” mark was changed to “RF,” alluding to the Republic Française, but it was changed back to the “LL” briefly when Louis XVIII took the throne. By this point, though, other makers had modeled their marks after Sèvres’ original style, making discernment between brands even more challenging. 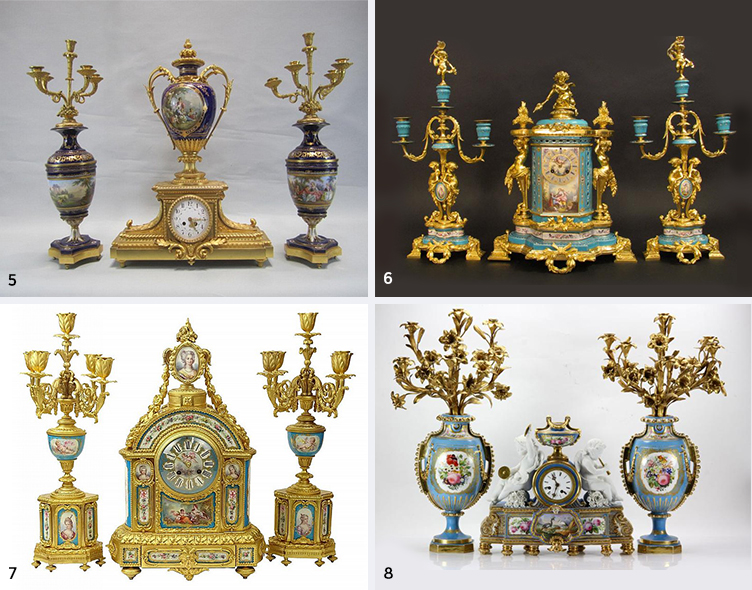 One of the grandest Sèvres sets to acquire is the trio of pieces included in a clock or garniture set. Introduced by the company in the 19th century, Sèvres clock and garniture sets are considered presentation pieces. Consisting of typically three pieces – either a clock paired with matching urns or a trio of vessels that share a similar decorative theme – these sets could be used as a mantel piece or as a decorative display on the most elegantly set table. Since the sale of such a set mandates three remarkably well preserved and paired pieces, the prices for Sèvres clock and garniture sets are most often higher than average. 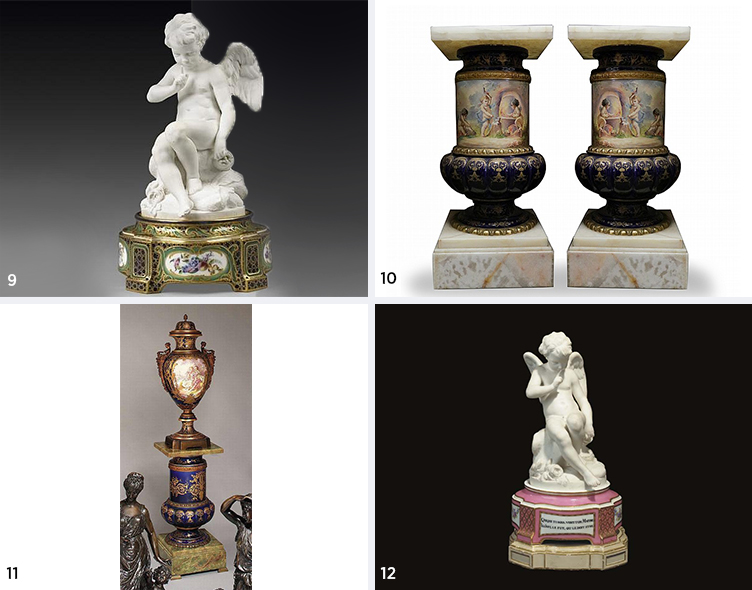 As a fitting complement to their impressive array of vases, urns, and decorative figurines, Sèvres also designed a selection of pedestals to pair with these pieces for decorative display. Over the years, the pedestals have become equally as envied among collectors as they convey the same intricate designs of painted or bisque porcelain. These examples are often complemented with striking ormolu, a decorative accent conjured from an alloy of several metals that assumes a gold luster. Given their size and complexity, Sèvres pedestals can also sell at notably high prices, their value increasing when still paired with their original counterparts.

9: Sèvres figure of a Cupid on a blue & green pedestal

12: Sèvres Biscuit figure of a Cupid on a pedestal 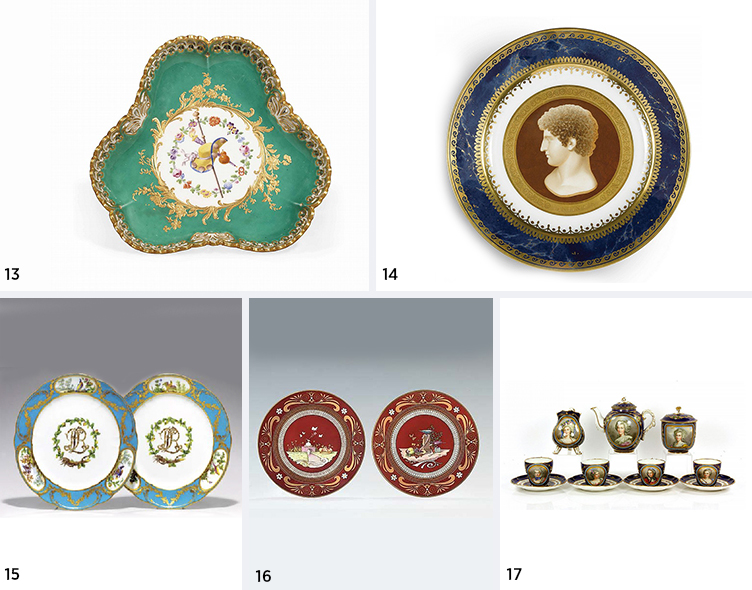 The service sets designed by Sèvres are a final category for which collectors consistently clamor. The range of prices for such pieces can vary significantly depending on characteristics such as the size of the service, the rarity of the style, or the status of the original owner. As a testament to this variety, one can find smaller full tea or table services that sell in the range of $10,000 to $15,000; at the same time, some rare examples can sell for even more. For example, a single plate from Service Iconographique Grec style, a design that Sotheby’s describes as “the most lavish and aesthetically successful of all the early 19th Century services produced at Sèvres,” can sell for more than $20,000.

Now’s your chance to complete or start your collection. Find stunning examples of Sévres and Sèvres-style porcelain up for offer on Invaluable. Inside the Archives: Lenox China Prices