From the table settings of United States presidents to the dinner parties of the everyday American household, Lenox china has been a perennially popular producer of porcelain and other ceramic wares. Today’s collector of Lenox designs can find some fantastic deals, with many sets and services selling within the $500 to $1,500 rage; the most superb styles though, can sell for many thousands. For example, the 2002 sale of a set of 1930s era Lenox Gold and Ivory Ground Topographical Plates at Christie’s New York reached a final hammer price of $28,860, one of the highest auction values ever achieved for a Lenox lot.

Collectors’ love for Lenox china stems from the company’s long history and dedication to superior craftsmanship, which dates back to 1889. That was the year that Walter Scott Lenox, the namesake of the brand, founded the Ceramic Art Company with his associate Jonathon Coxon in New Jersey. Not long after though, Lenox assumed sole ownership and officially renamed his company Lenox Incorporated in 1906.

By the subsequent decade, the small Lenox workshop in New Jersey became a nationally renowned maker of porcelain dinner services. This was in part thanks to the release of several spectacular patterns, such as “Lowell” (released 1917) and “Autumn” (released 1918). Their success was also owed to United States President Woodrow Wilson (1931-1921), who was so taken with Lenox’s designs that he ordered a set of their “Command Performance” pattern for the White House. Subsequent presidents followed suit, from Truman to Clinton, creating an enduring tradition but also ensuring Lenox’s ongoing acclaim over the course of the 20th century.

In addition to these exceptionally exquisite services, Lenox also ensured that they stayed in step with everyday evolution of modern tastes. The later 1920s saw Lenox produce patterns, such as the “Eternal” line, that were inspired by the clean geometry of the Art Deco Age. In the 1950s, Lenox merged into the field of figurines and other small decorative objects while also updating their patterns for a modern appeal, even producing for a time Lenox Ware, a more utilitarian melamine line of dinnerware.

Unlike other brands whose brilliance began to wane as the 21st century approached, Lenox stayed true to their aim to produce expertly crafted ceramic ware. As a result, their designs dating into the 1960s and 1970s are as in demand among collectors as are their patterns of decades past. This enduring appeal of Lenox serves as a great reminder that tasteful tableware never goes out of style; now is the time to start collecting though, before the exceptional antique Lenox examples go out of your price range.

Below is a list of realized prices for Lenox china from the Invaluable price database that highlights some of the most characteristic examples in a range of styles from the most valuable to the most accessible.

Exceptional Patterns from the Early Years 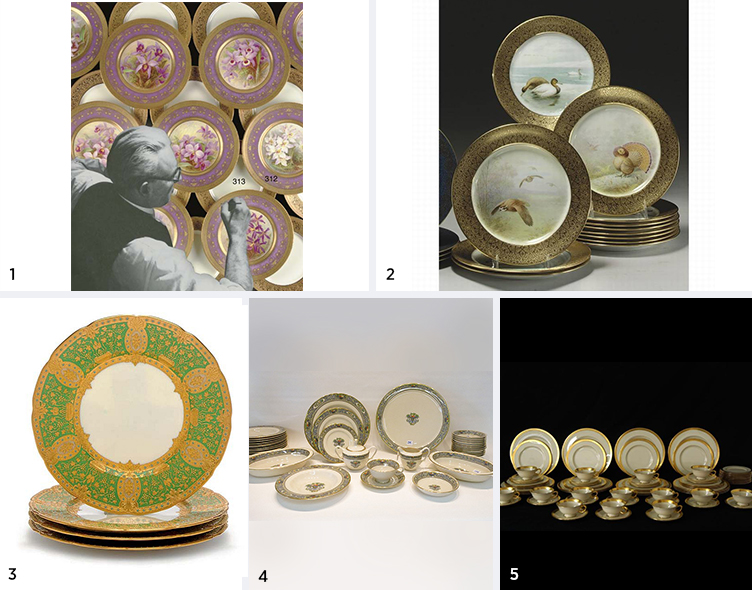 Some of the highest prices for Lenox ceramics are sourced from the patterns and plates produced by the company in the 1910s. Desired due to their luxurious designs and impeccable craftsmanship, many of these early 20th-century patterns were equally acclaimed in their day. The “Lowell” pattern, for example, which debuted in 1917 and feature a sophisticated gold patterned rim on an ivory ground, became an immediate success. The “Autumn” pattern, released the following year and identified by a central floral motif complemented with a matching rim of decoration, also proved incredibly popular and one of the brand’s best sellers. Collectors can always confirm the dating of their designs from this period by checking for a stamp in the shape of a green wreath on the bottom of a piece, the mark typically used on Lenox ware from 1906 to 1930. 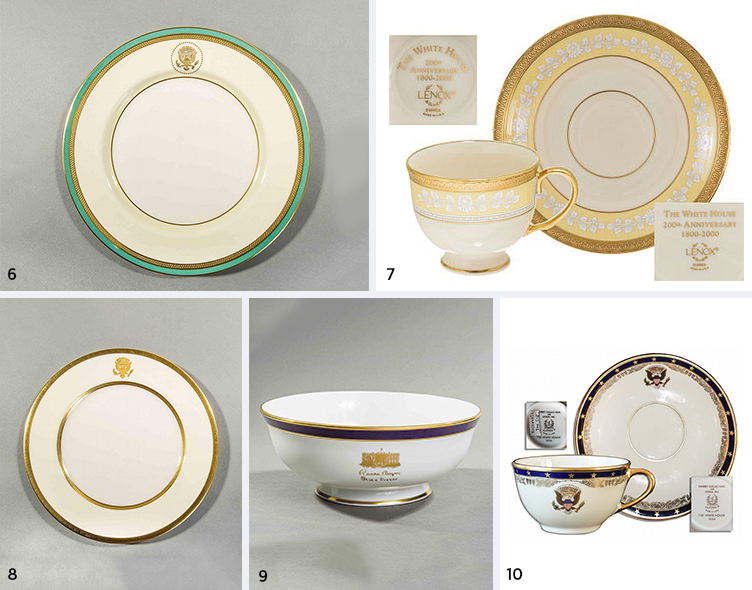 Lenox collections designed for past presidents blend the realms of porcelain and patriotism and thus also serve as a popular collecting category. Since President Wilson’s commission of a 1,700-piece set, deemed by Lenox the “Command Performance” pattern, Lenox became one of the leading designers for presidential dinner services. Each president’s design is slightly different, yet they all celebrate the artfulness of Lenox alongside American heritage. 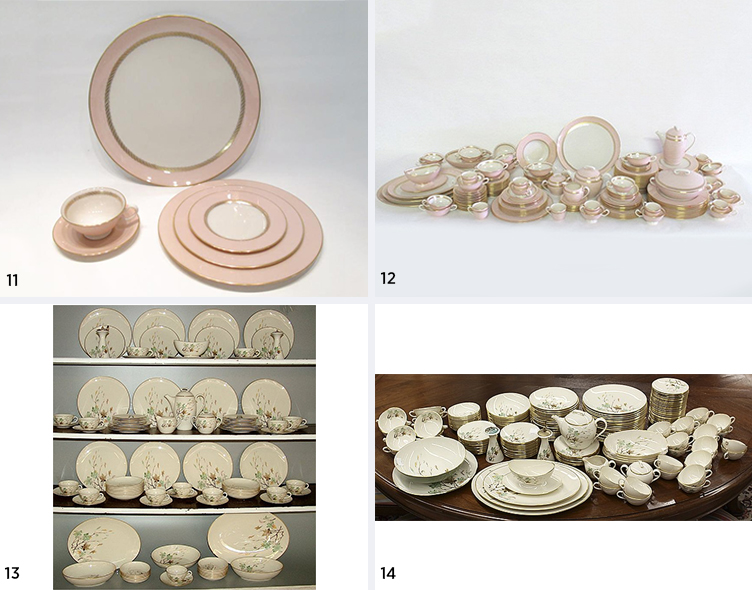 Lenox designs of the 1950s offered a pleasant break from prior formal service and responded to a growing interest in well-crafted yet refreshing dinnerware. Lenox responded to these shifting tastes with patterns such as “Westwind,” produced from 1952 to 1981, and “Caribee,” made from 1954 to 1970. “Westwind” featured a simplified, asymmetric motif of branches in the breeze, rendered with subtle washes of color and delicate contours akin to Japanese print. “Caribee” was the ultimate in streamlined sophistication, featuring simply a pale pink rim and a golden rope verge. 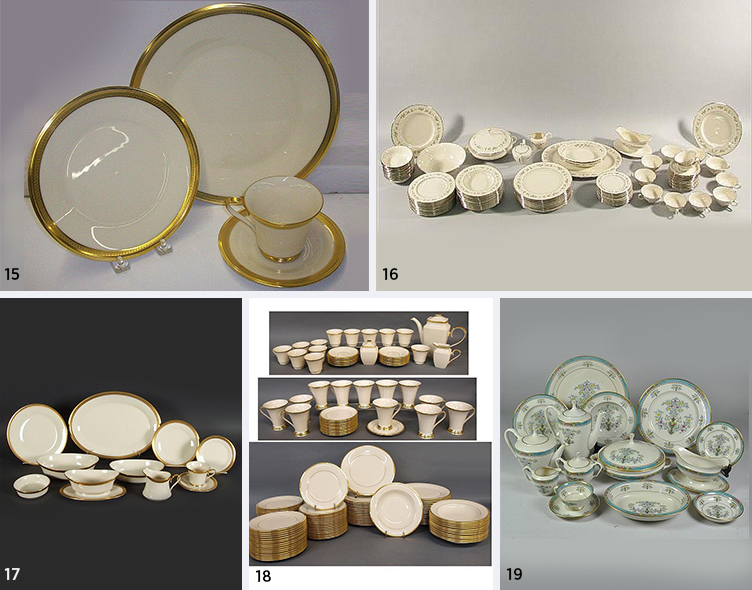 As a testament to Lenox’s longevity, even more recent Lenox patterns make the favorites list among fans of the brand. One of the most popular from this period is the “Aristocrat” pattern, which debuted in 1963 and featured a styling quite similar to the older “Lowell” pattern from the dawn of the century. Floral patterns, such as “Brookdale” (produced 1963 to 1993) and “Blue Tree” (produced 1974 to 1984) have also proven popular, perhaps an indication that traditional patterns are also timeless in their taste.