As anyone who has ever owned a Rolex will tell you – be it new or pre-owned – you’re not just buying a fancy looking watch that everybody will recognize. What you’re buying is peace of mind. You know your hard-earned money is being spent on a product that will be accurate, reliable and in style for years to come, decades even.

Some of the more approachable models, like the Rolex Submariner Ref 5513, have been priced around $5,000-$8,000, but you can pay upwards of $100,000 for in-demand classics like the Paul Newman Cosmograph Daytona.

Rolex wasn’t always the giant behemoth of a watch manufacturer it is now. Years ago when some of the most popular models today were first being conceived Rolex was a relatively small, quirky company that played things a little looser than they do now. Not surprisingly this approach made for some great stories, which became an intrinsic part of the brand’s history.

For example, Rolex (and other watchmakers at the time) used to use a radioactive material called Radium to illuminate its dials. This of course was determined to be a bad thing and so the company switched to the much safer Tritium. During this transition phase, one of the way’s Rolex made it easier for Custom’s officials to identify the new dials was to put a small horizontal line on the dial, sometimes below 12 o’clock, sometimes just above 6 o’clock. A minor detail, but these days Rolex watches with original ‘underline’ dials are sought after by collector’s and can dramatically change the price achieved at auction.

Probably the best thing about vintage Rolex though is the fact that there are models to suit just about any budget, whether you’re looking to spend a few thousand dollars or a few hundred thousand. Here’s a few suggestions to help you get started on your collecting journey, recent realized prices from the Invaluable price database. 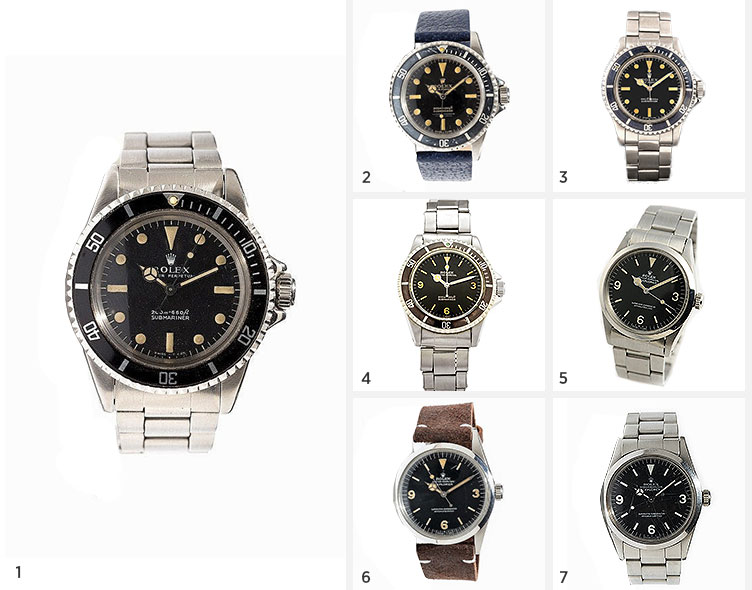 For many vintage Rolex enthusiasts the Submariner Ref 5513 is the Submariner to have. It’s not the rarest – in fact it is probably one of the longest continually produced series in Rolex’s history, running from 1962 until 1989. However, it epitomizes the classic dive watch. Also, because of its long production life there are a number of variations out there that make hunting for Ref. 5513’s even more fun.

For example two different movements were used in the 5513 over its lifetime – calibers 1520 and 1530 respectively – neither of which were certified chronometers. Likewise some dials feature the water depth rating with meters first, whilst others show feet first. Just one of many little quirks that make these watches so fun. Perfect for first-time buyers you can expect to pay around $5,000 – $8,000 for a good quality Ref 5513 Submariner. 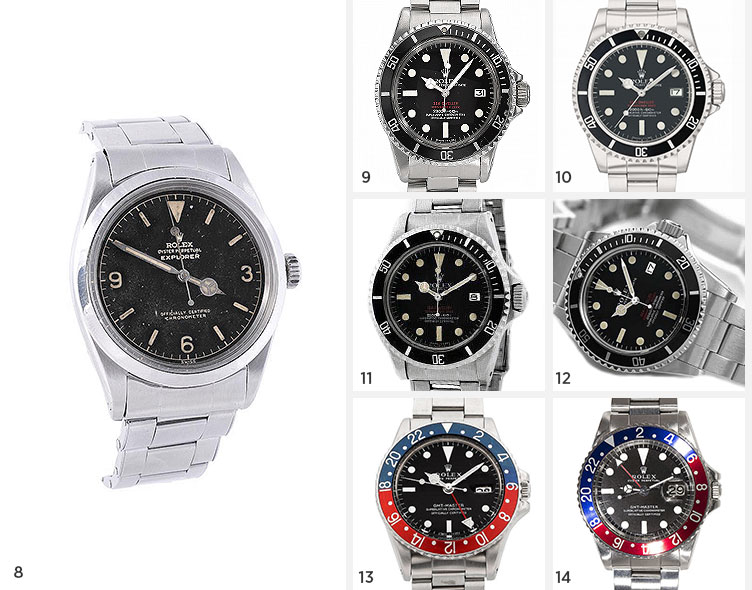 It’s no secret that the humble Rolex Explorer often gets overlooked in favor of the more popular Submariner and the GMT Master, partly due to its smaller diameter of 36mm. As the name suggests, it was originally developed as a “tool” watch for explorers and was actually used by members of the successful 1953 Everest expedition as well as other expeditions before and after. The Ref. 1016 was the most common series made and was in production for over 25 years, again with a number of variations being made throughout that time. They all share the common traits however of being simple, practical and absolutely fit for purpose. Pricing for the Ref. 1016 generally ranges from about $8,000 – $12,000 depending on the condition and year of production.

The original concept for the Sea Dweller was developed in conjunction with COMEX, a French company specializing in engineering and deep diving operations, back in the 1960s. At the time they needed a diving watch for their professional divers to use whilst working on deep sea oil rigs. To satisfy this need, Rolex modified regular Submariner watches (the ref. 5513 we covered above) to incorporate a helium escape valve, subsequently creating a specific reference just for COMEX (the ref. 5514.)

Following on from the success of this project the decision was made in 1967 to create a new reference fitted with helium escape valves – the Sea Dweller Ref. 1665 – and offer them for commercial sale. These was the first ever Sea Dweller capable of reaching a depth of 2,000ft or 610 meters, a huge deal at the time. To clearly delineate these models Rolex printed two lines of text in red just above 6 o’clock. In larger lettering the first line reads “Sea-Dweller” whilst just below that in slightly smaller lettering the second line reads “Submariner 2000”, hence the “double red” moniker. Considered fairly rare by Vintage Rolex standards plan to pay upwards of $30,000 for a good quality Double Red Sea-Dweller. 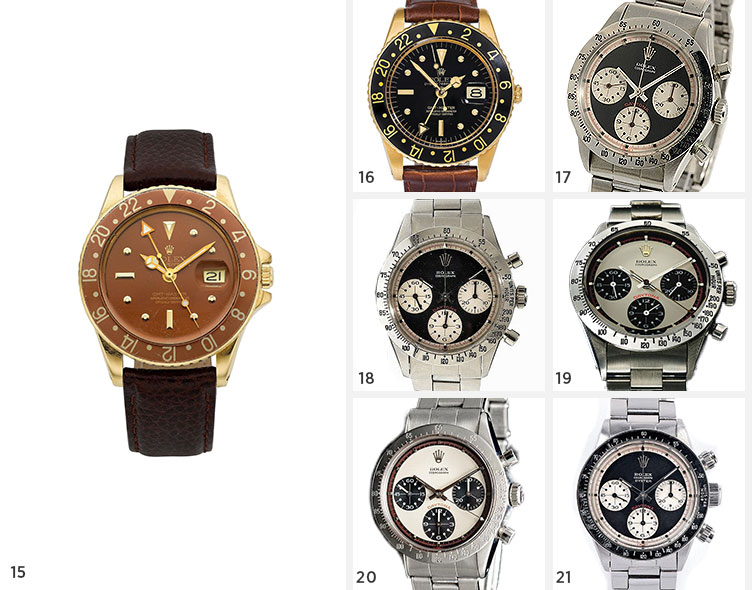 Designed for pilots and the jet-set alike the Rolex GMT-Master was the quintessential travel watch. Rugged good looks, practical functionality, COSC-certified movement, this was the watch for people who didn’t just want to keep track of a second time zone, they wanted to look good doing it. Another long-running model, the Ref. 1675 was produced from 1959 to 1980 and again there was a lot of variation during that time. Two different movements – the caliber 1565 and caliber 1575 – different sized GMT hands, the introduction of crown guards, this is a watch with some serious history. Keep an eye out for models with rare gilt dials, not only are these especially beautiful but they also tend to be more valuable. Budget-wise, I would suggest a minimum of $10,000 but expect to pay more for those little extra details

What makes a Paul Newman Daytona a Paul Newman Daytona? Simply put, the dial. In total there are considered to be six different versions of the PN Daytona with the most common being the first version, the Ref. 6239, the model that Newman himself actually wore. Production on this model began in the mid-1960’s and the watch was available with either a black or white dial. That being said, there should be three colors in total on the dial; black, white, and red, and the word “Daytona” should be printed above the register at 6 o’clock. Beware though Paul Newman Daytonas are extremely rare and often referred to as the ‘most-faked Rolex’ on the planet, so it’s important to really do your homework and only buy from trusted sellers, as you will very likely be spending close to six figures, if not more.

Looking for more vintage and new examples? Find Rolex watches up for offer in upcoming auctions. Inside the Archives: Pocket Watch Prices