Turkish and Persian rugs represent some of the most striking and elegant examples of weaving available in the market today. Pair their luxurious aesthetic with the impressive history of the rug-making tradition, and these sumptuous textiles become even more tantalizing as they reflect an aspect of Middle Eastern culture that dates back millennia.

Persian rugs are identified by region or decorative motifs. Because of the craftsmanship associated with the category, some prime examples sell for upwards of $1 million; however, more accessible pieces begin around $10,000.

Quite often the terms “Persian rug” and “Turkish rug” are used interchangeably, but they refer to two distinct approaches of rug-making. Persian rugs originated in ancient Persia (modern-day Iraq) and represent the older of the two traditions, with the earliest example known today as the “Pazyryk Carpet,” dating to the 5th century BCE. Many of these early rugs were purely functional in scope, but as time progressed, their design became more luxurious and reflective of cultural influences.

By the 16th century, such rugs had become an essential element of artistic expression throughout the Middle East, and thus the tradition of the Turkish rug was born. Today, Turkish rugs have become an all-encompassing term for rugs produced in the authentic tradition outside of Iran (for example, in Afghanistan, Egypt, and Turkey, where looming thrived). Authentic Turkish carpets are traditionally hand-loomed just as their Persian counterparts are, and they also share similar styles and patterns, which has contributed to the muddled melding of traditions.

One easy way to distinguish between the two traditions is to look for a label: many authentic Persian rugs bear a label documenting their creation in Iran. Another signature characteristic is in the nature of the rug’s knots. While traditional Persian rugs are typically constructed of single-loop knots, which results in a more refined weave, Turkish rugs usually employ a double-loop.

In today’s market, while Persian rugs are widely celebrated (the magnificent Persian “Sickle Leaf” carpets hold the current record for any rug sold at auction), examples from both the Persian and Turkish traditions garner great enthusiasm among collectors.

Below is a list of realized prices for Persian and Turkish rugs from the Invaluable price database, highlighting some of the most characteristic examples in a range of styles from the most valuable to the most accessible. 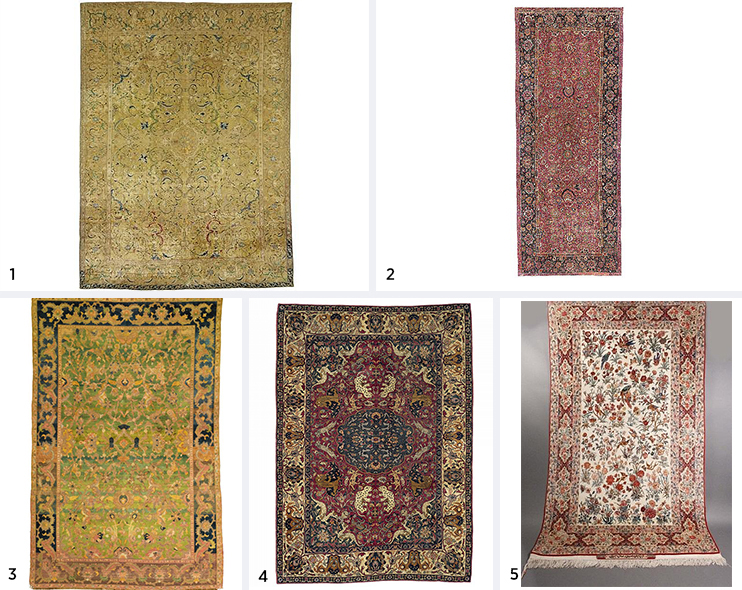 Isfahan was the glimmering Persian capital founded by Shah Abbas (1586-1629) that today sits near the heart of modern-day Iran. Shah Abbas was part of the Safavid Dynasty of rulers (1502-1736), which was one of Persia’s most powerful and profitable eras. This wealth was poured into luxurious lines of woven rugs, to the point that the Shah even established a court weaving workshop. This transformed Isfahan into a central outpost for Persian rug production – in fact, one of the most recognized Persian carpets in the world, the Ardabil Carpet, came from one of Isfahan’s 16th century studios, as did the record breaking “Sickle Leaf” Carpet that sold at auction in 2013. As a result, examples associated with these workshops are particularly attractive for collectors. The most expensive examples of these Persian carpets are rendered in silk that, while not as durable as wool, exude a distinct opulence in the subtle sheen of their fibers. 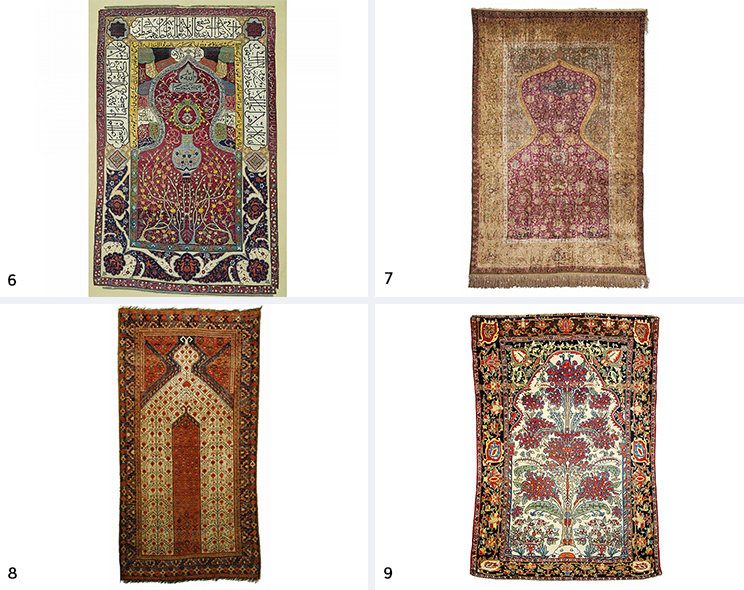 Persian and Turkish prayer rugs celebrate the visual heritage of the Islamic faith and were designed to add a means of portability for worship. Rugs were essential accouterments for participation in Islamic prayer, thus makers began to incorporate aspects of that practice into their designs. These motifs ranged from Arabic inscriptions from the Qur’an to orientation guides toward Mecca. Tree of Life rugs were also a popular motif among those of the Islamic faith, however the origin of this symbol dates much farther back in history. Intended to allude to themes of regeneration or continuation, these tree motifs were a sign of hope for or connection with one’s cultural heritage. 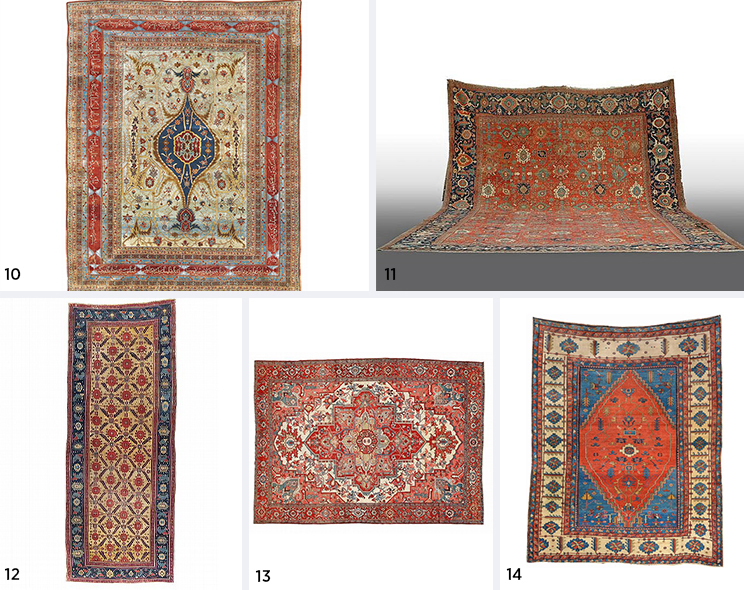 Another type of Persian rug that is popular among collectors is the Heriz rug, which originates from Heriz, or Heris, in northwestern Iran. These utilitarian textiles are deliberately less opulent but, accordingly, more durable. Generally speaking, these carpets have a thicker weave, and the patterns are less ornate. The advantage, however, of Heriz carpets is that their durability has helped them stand the test of time: where finer, silk rugs have disintegrated over the years, antique Heriz rugs can be found in much better condition.

Some of the most notable Turkish rugs are those produced in the region of Anatolia, the main peninsula of modern-day Turkey. Particularly popular are the rugs produced in Ushak, a central carpet-conjuring outpost of the Ottoman Empire. Many historic Anatolian carpets dating to the 15th through 17th centuries have also become known as “Transylvanian” rugs. These rugs are so named as they were used as pew coverings and decorations in churches in Transylvania (modern-day Romania).

Looking for more? Click here to find an extraordinary mix of Persian and Turkish rugs on Invaluable now.

What to Know About Fabergé: Eggs, Jewelry & More