One of the lesser-known facets of the prolific figure’s career, Picasso’s ceramic works espouse the artist’s characteristic aesthetic. What’s more, some of his ceramic creations come with the added benefit of boasting a lower price point than other Picasso pieces, allowing accessibility for a wider array of collectors. These lower-priced pieces can be found for as low as $1,000; however, increased demand in recent years has led to a number of record-breaking sales and some high-quality pieces have sold for several million dollars.

“Picasso ceramics provide a wonderful opportunity for collectors to purchase works of art by one of the most innovative, prolific and celebrated artists of the 20th century – for a fraction of the price of his paintings,” says Cynthia Klein, Director of Prints & Multiples at Doyle New York. “Picasso welcomed the idea of making multiples from his unique ceramics, generally in editions of 50 to 500, pleased that they would be affordable to a wide audience.”

Picasso’s work with ceramics began late in his career and was brought on by his love for the light and vibrant pottery along the Mediterranean coast. He found particular admiration for the work of the Madoura ceramic company, located near Cannes, in the south of France. He began collaborating with the company’s owners, Georges and Suzanne Ramié, in 1946, complementing their expert, modern forms with his artistic influence.

Their working relationship was level – Picasso had full use of the Madoura workshop, and the Ramiés had control over the sale of the pieces – and longstanding, as it lasted over two decades. The product of this extended collaboration was a body of more than 600 different ceramic designs that were streamlined, decorative and, in many regards, equally as compelling as Picasso’s painted works.

Though an integral part of the later career of the artist, Picasso’s ceramic wares were considered at first lesser production as compared to his painterly examples. That conception changed in the late 1990s, though, with landmark exhibitions such the Metropolitan’s “Picasso: Painter in Sculptor and Clay” show (1999), which set his ceramic pieces on par with his some of his paintings.

In the decades since, increasing numbers of ceramic pieces by Picasso have appeared on the auction market. Accordingly, these pieces are now entering the limelight, with many selling for multiples more than similar pieces did even a year ago.

“The market for Picasso ceramics has been particularly strong in recent years,” says Dunham Townend, Associate Specialist in Modern & Contemporary Art at Freeman’s. “A number of high profile sales have resulted in an increased awareness and interest in this area of the artist’s oeuvre.” The record setting sale of the ceramics collection of Picasso’s granddaughter, Marina, for example, in the summer of 2015 broke every expectation, with some pieces reaching more than four times their estimated sale price.

While it’s safe to say that Picasso’s ceramics are no longer obscure, these record prices should not deter the burgeoning or budget-minded collector. The combination of Picasso’ profuse designs with the fact that he often created many hundreds of multiples of some patterns means that many exceptional Picasso ceramic pieces can still be found at fantastic prices. Given the sales trends, however, the time to invest in such a find is now.

Below is a list of realized prices for Picasso ceramics from the Invaluable price database, ranging from the extremely valuable to value deals. 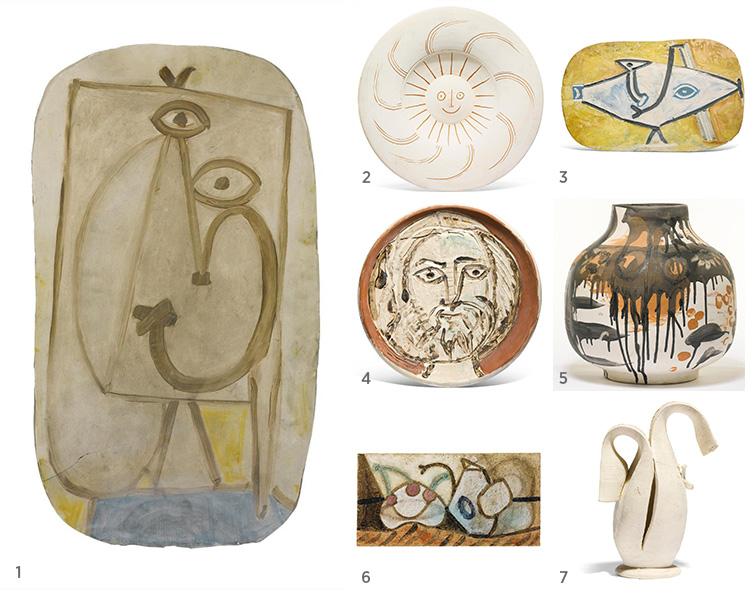 Picasso’s ceramics are as varied in motif as the rest of his artistic career, but the current market suggests that his most desired pieces are his one-off painted and incised plates, plaques, and tiles. These tend to trend at higher prices than some of his smaller ceramic vessels and vases.

“The prices for Picasso ceramics do vary quite a bit,” says Townend. “One can find works being sold at auction for anywhere from $1,000 to $2,000,000. The variation in price corresponds with the desirability of the particular example.”

As the auction examples below reveal, prices for such Picasso ceramics have skyrocketed in the very recent past, particularly with the pieces sold from Marina Picasso’s collection (of which some of these were a part). 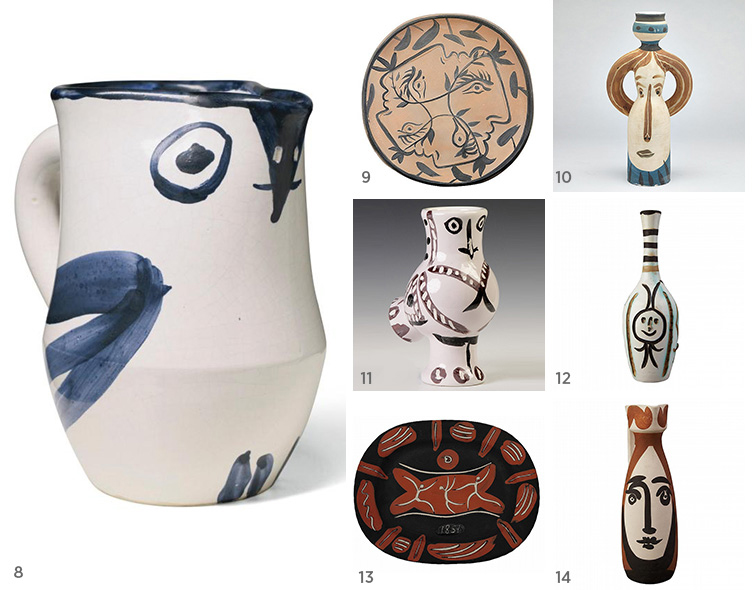 Some of Picasso’s smaller pieces made in multiples are equally as compelling and yet much more cost effective. With similar motifs as the more rare pieces, such as abstracted faces and animal forms, the fact that numerous versions of these pieces were created helps to keep prices significantly lower.

Many of these smaller ceramic objects still come bearing the Madoura hallmark, edition number, and creation date, all of which reinforce their connection with Picasso’s production. Some pieces, however, lack these all these reassuring markings, which, as sales trends suggest, tends to diminish sales price somewhat.