Pocket watches are nowhere near as popular as wrist watches; however, in recent years, sales have been on the rise, with some rare examples reaching prices as high as $3 million at auction this year.

The first personal timepieces that people could carry around were of course, pocket watches. Many brands we know today, like Omega and Longines, started in the first half of the 19th century as “comptoirs,” agents responsible for assembly and sales of these watches using parts that came from the cottage industries of the Swiss Jura region.

As manufacturing techniques were refined over time, accuracy improved. The American pocket watch industry was born when railroad schedules demanded not only unified time zones, but accurate watches in order to prevent accidents along the mainlines. Around the turn of the 20th century, Patek Philippe and others were making more and more complicated pocket watches, catering to rich industrialists.

During World War I watches needed to be strapped to soldier’s wrists, and modifications to pocket watches were duly made. But the need for accurate pocket watches, and especially timers (chronographs and stopwatches) extended through World War II.

They also represent an easy, relatively inexpensive entry point for new collectors. Complicated pocket watches, however, is a very narrow niche category and ultra expensive. Below are five of the most recognizable pocket watch styles and price ranges gathered from the Invaluable Price Archive.

Around the turn of the 20th Century, Patek Philippe and others were making more and more complicated pocket watches. For instance, two American industrialist/ financiers, James Ward Packard (of Packard automobile fame) and Henry Graves Jr. engaged in an escalating “war” to own the most complicated watch ever produced. 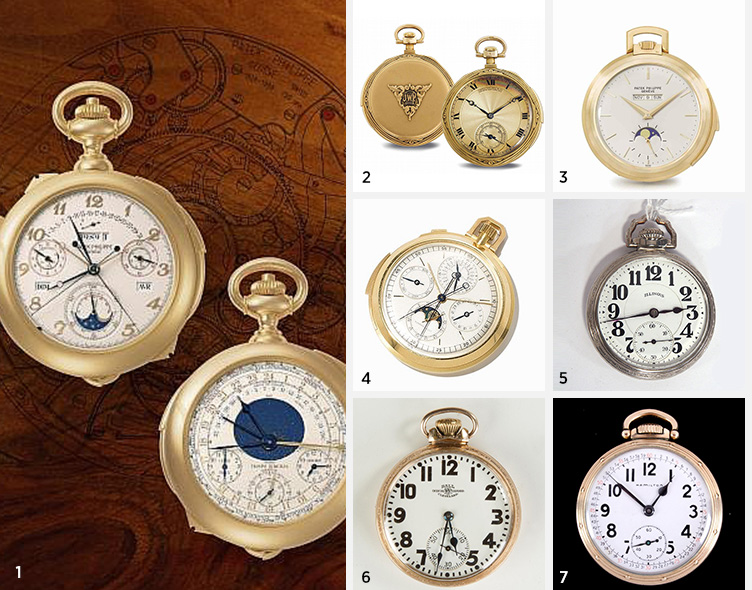 These watches, along with standardized time zones, were vital to keeping trains on schedule and prevent disastrous, often head-on, collisions on single-track mainlines. Keeping good time on America’s railroads in turn, was vital to the industrial growth of America in the early half of the 20th century. (Price Range: $200-3,000) 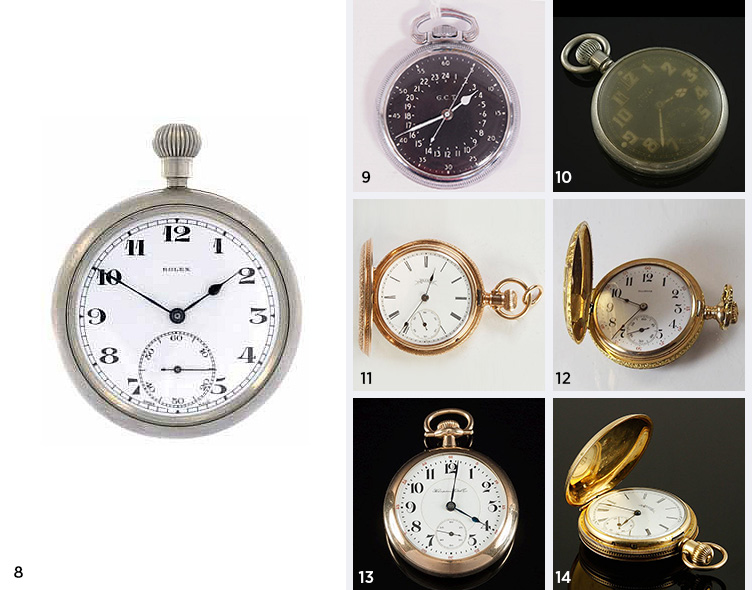 Military pocket watches and timers were limited to a relatively few companies, Hamilton being chief among American manufacturers, with watches like their 4992B 24-hour watch. Such watches were vital to military missions of all types. These watches weren’t as popular as wristwatches by World War II, but they had their place, especially behind the front lines. (Price Range: $300-500)

Along with railroad grade pocket watches, numerous American companies like Hamilton, Elgin, Waltham, Illinois, and Hampden made more modest pocket watches. According to one source, 124 pocket watch companies existed in America between 1804 and 1968.

Back then, buyers went to their jeweler to choose a movement, which usually came with signed dial attached, and then chose a case separately. The jeweler’s watchmaker installed the movement in the case, often a nice hunter (clamshell) case, depending on the orientation of the movement’s winding stem. (Price Range: $75-500) 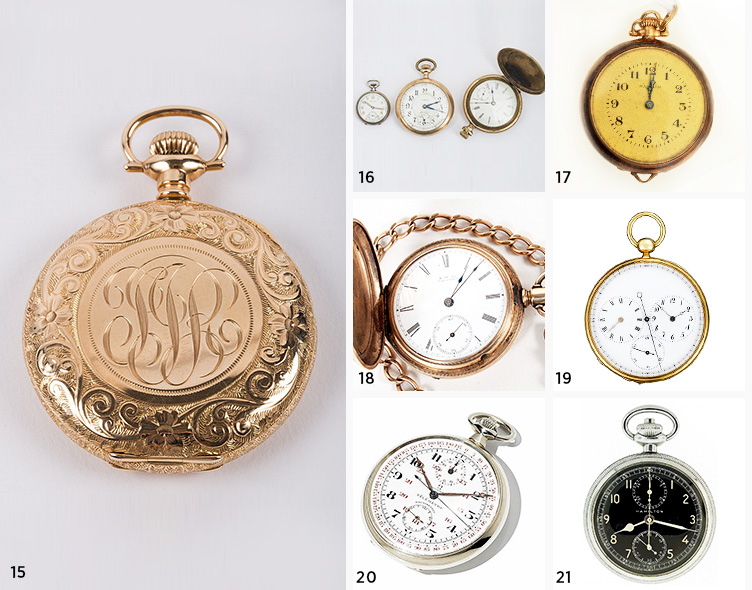 Stopwatches are a special category – partially overlapping with military pocket watches, like the Hamilton Model 23 AN-5742-1 Military Chronograph. These timers were especially useful during bombing missions over Europe and the Pacific where massive, highly synchronized bombing raids helped win the war.

Other stopwatches found service as sports timers, like the Omega Split Seconds Chronograph first used in the 1932 Olympics. Numerous other brands got into the sports timing action, including Longines, Heuer, Hanhart, Breitling, and Minerva. But Omega was most often chosen to time the Olympics, even after the heyday of these unique pocket watches ended in the 1960s. (Price Range: $30-5,000)

Learn more about Elgin Pocket Watches from In Good Taste Inside the Archives: Breitling Watch Prices Inside the Archives: Tudor Watch Prices