The Zsolnay Porcelain Factory was one of the most renowned Hungarian makers of porcelain and stoneware in the late 19th and early 20th centuries. Founded in 1853 in Pécs, Hungary, the company rose to prominence twenty years later with their showing at the 1873 Vienna World’s Fair. Today, the market for Zsolnay ceramic pieces has yet to cool.

Although price is determined by innumerous factors including date, glaze, and form, information from our price database reveals ceramics from Zsolnay may range from $400-60,000.

Their success stemmed from their remarkably rich color and considerably complex pattern that was inspired by the Islamic artistic tradition. The warm reception of their pieces in Vienna, following a Grand Prix win for the same styles several years later at exhibition in Paris, spurred the Zsolnay team to further invest themselves in Islamic aesthetics.

It was this Eastern allure, in fact, that gave rise to two techniques that would secure Zsolnay’s status as a ceramics star. The first of these innovations was the development of pyrogranite, a special ceramic formula that allows its pieces to withstand the stresses of temperature and environmental pollution (e.g., acid rain). This technique, which Zsolnay introduced in the late 1880s, allowed the company to excel as one of the most notable producers of opulent tile and ceramic vessels for exterior use, such as those seen still today on Budapest’s Museum of Applied Arts.

Soon after the success of pyrogranite, Zsolnay debuted its use of the metallic eosin glazes in the early 1890s. The advantage of the eosin process was that it offered a shinier, iridescent surface in a rainbow of colors that ranged from deep reds to luscious purples. Zsolnay debuted their “rouge flambé” red eosin glazed pieces in 1891, and the technique proved so captivating that it that rapidly rose to popularity among the great designers of the late 19th-century Art Nouveau age, rivaling the likes of Tiffany glass.

In the years leading up to World War I, Zsolnay had cornered the European market with its range of glazes and innovative shapes (over 3,000 respective designs were logged by the company between 1898 and 1914). Unfortunately, though, the wartime years would take their toll. World War I forced a dramatic reduction in Zsolnay’s output, and World War II resulted in the bombing of one of the company’s most prolific factories in Budapest. Communism dealt the final blow as it forced the nationalism of the company in 1948, with the name Zsolnay eventually disappearing from production. It was not until 1982 that the Zsolnay name returned, but the redeveloped company abandoned the exquisite output for which the brand was known earlier in the century.

“The factory was nationalized by the government and production fell to its lowest standard and has never really recovered. There really were few popular examples after 1948,” says Federico Santi of the Drawing Room Antiques, who together with John Gacher wrote the book, “Zsolnay Ceramics: Collecting a Culture,” published in 1998.

“Between 1900-1910 is the decade of high-style production from the Zsolnay Factory: Art Nouveau or Secession era. Form and glaze are the two major components that equate value during that era of production. There were examples that were signed by specific designers, though the factory did not encourage artist signed examples.”

A few of the more important designers at the turn of the century, adds Santi, include Rippl-Ronai, Abt, Mack, Skiorski, and Nagy. “Snakes, bats, and dragons are forms high on the list for collectors. But there were over 10,000 different forms designed at the Zsolnay factory and we are frequently discovering a form never seen before.”

Below is a list of realized prices for Zsolnay ceramics from the Invaluable price database, highlighting some of the most characteristic examples of Zsolnay’s production in a range of styles from the most valuable to the most accessible. 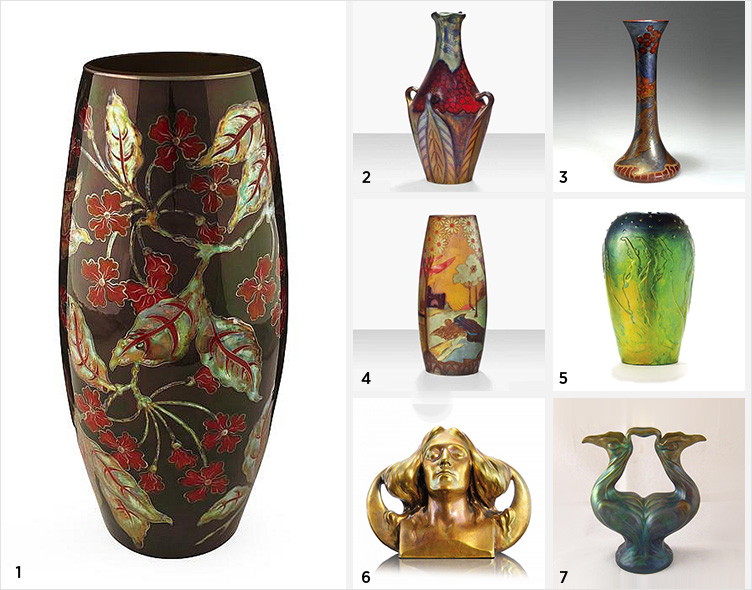 Some of the most coveted Zsolnay pieces that survive today are those that feature both luminescent glazes and striking, imaginary landscape scenes. These pieces channel a bit of Hungarian folklore alongside Zsolnay’s fascination with the luster and brilliance of the Eastern visual tradition. In many of these examples, Zsolnay artists blended hints of Islamic ingenuity with quotations of Art Nouveau luxury, resulting in some of the most striking examples of ceramic art at the turn of the century.

The highest prices for Zsolnay landscape vases are typically achieved for those pieces that come from around the turn of the century and, fortunately for Zsolnay collectors, deducing the age of a piece is relatively straightforward. The majority of authentic Zsolnay pieces come marked with an incised form number that corresponds to that piece’s production year. Any form number smaller than 9140 means that the piece predates 1940; any number less than 5675 suggests the piece predates the dawn of the 20th century.

Equally compelling and celebrated among collectors are the pieces that showcase the brilliance of the eosin glazing process. Though the landscape vases also often incorporated the eosin finish, the following group truly exemplifies the brilliant luster possible with the process. As a result, these examples embody the luxuriousness inherent in Art Nouveau design while also highlighting what Zsolnay was such a respected brand in the early 20th century. This group also showcases more of the range of Zsolnay’s shapes – from curvaceous (and relatively colossal) urns to subtle portrait busts, like that created by iconic designer Sándor Apáti Abt (1870-1916).

The most common eosin glaze used by Zsolnay was a gorgeous green-gold, which is still arguably the most frequent hue seen in available examples today, with the older pieces typically exhibiting a greater golden hue than pure green. “But eosin glaze can come in different colors, including red, purple, blue, and violet,” says Santi. “A great form with only one glaze has a certain value; however if there are multiple glaze colors to the same example, the value can be increased up to ten fold.” In general, he says, the best examples of Zsolnay, those created around 1900, have multiple colors which classify as the best examples.

6: “Luna” Bust by Sándor Apáti Abt 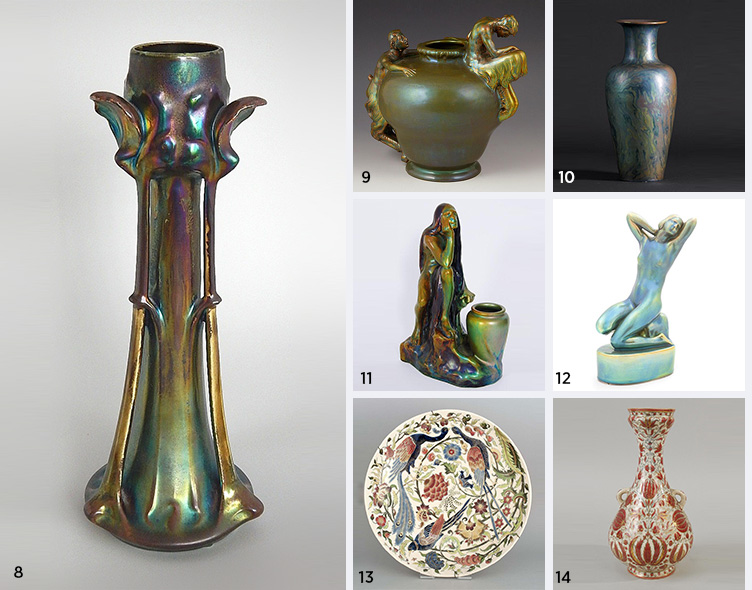 While often overshadowed by some of the brand’s eosin pieces in terms of price, Zsolnay’s Islamic inspired pieces are a wonderful reminder of the early inspirations of the maker. In addition, they continue the tradition of expert craftsmanship and alluring artistry, their rich motifs, borrowed from the Iznik and Damascene traditions, and gilden accents creating equally compelling examples of Zsolnay’s artistry. 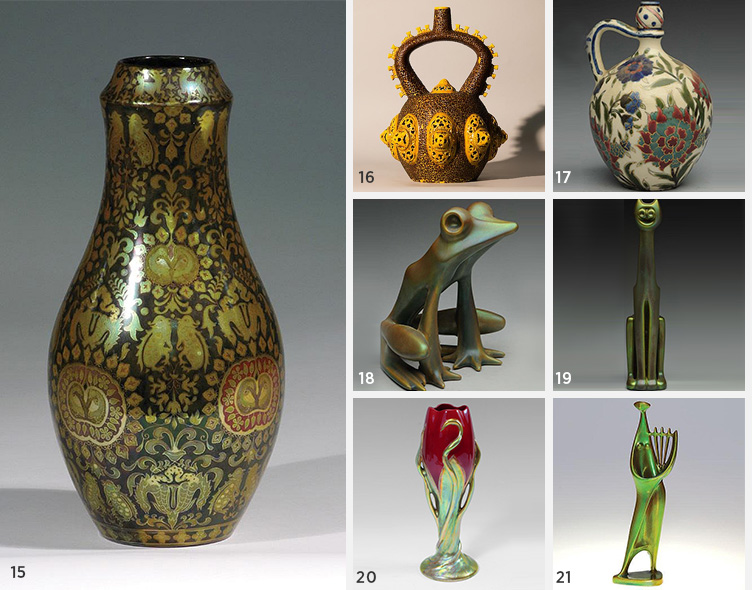 Though the Zsolnay brand was thrown into turmoil near the midpoint of the 20th century, their designers continued to respond to contemporary trends until the very last days of the original brand’s production. These pieces, such as those shown below, reflect an attention to modernist design while still alluding to the eosin glaze that had raised such acclaim for the brand.

In general, one way to spot a more contemporary Zsolnay piece is to observe the foundation date included in the base stamp: between 1968 and 1996, the Zsolnay stamp typically included the erroneous foundation date of “1868” (since the company was actually founded in 1853).

*Looking to get ahold of rare Zsolnay porcelain works of art? See a unique selection available to buy now or featured in upcoming auctions. What Makes Duck Decoys Valuable? A Price Guide for Collectors Everything You Need to Know About Hummel Figurines
Recent Posts
Categories