Papercut art, also called papercutting, or scherenschnitte in German and découpage in French, is the art of paper designs. Its origins trace back to the Han Dynasty in Northern China in the 4th century AD, after Chinese official Cai Lun invented paper in 105 AD.

Chinese papercut art was often created in order to make stencils for fine silk decorations, and it remained a popular art form during the Song and Tang Dynasties. A Collection of Eight Chinese Paper Cuts. Coming to auction in August 2021 via Theodore Bruce.

The oldest surviving paper cut was found to date back to the 6th century, in Xinjiang, China, and is in the form of a symmetrical circle. By the 8th or 9th century, art by papercut appeared in West Asia, and in the 16th century, in Turkey. The technique later emerged in Western Europe, in Switzerland and Germany, in the early 17th century, correlating with trade with Asia.

Evidence of occidental papercut art dates as far back as 1612; when the first papercut work was found in Germany. In the 19th century, silhouette papercut portraits rose to popularity, with the poet Johann Wolfgang von Goethe being one to make them for his friends. Unique types of art by papercut have emerged across all regions of the world, representing specific cultural styles and traditions. In some areas, for example, designs are cut from one single sheet of paper, while in other areas, multiple adjoining sheets are cut to create layered papercut art, like a collage.

While papercutting varies greatly across the world, we’ll dive into some of the most popular countries and cultures where the traditional folk art remains treasured and embraced by today’s modern artisans.

Scherenschnitte (“schere” for scissors, and “schnitt” for cut) is the German word for papercut art. It describes the traditional craft of cutting papers with scissors or knives. It began in Germany and Switzerland in the 16th century, and was brought to colonial America in the 18th century by Swiss and German immigrants.

Scherenschnitte came to be wildly popular in Switzerland, often featuring a silhouette or a traditional Swiss scene. The process of creating Swiss papercut art “requires immense skill and meticulous attention to detail.” Some of the most popular Swiss papercuts were created by Hans Jakob Hauswirth, whose unique style of layered papercut art many modern artists continue to follow. The folk art came to celebrate Swissness, expressing the Swiss admiration for order and reliability, family and community, daily and seasonal rituals, as well as nature, landscapes, and animals such as cows and goats. Artworks can be both serious and playful, and at times heartwarmingly sentimental, said to represent the nature of the Swiss people.

Papercut art as a celebration of Swiss nationality and culture has been achieved in ways that other nations seemingly have not quite achieved. In a 2016 New York Times article, “Paper Cuts,” author Jane A. Peterson wrote, “Today, there is ‘scissors cut’ art in [many countries], including Mexico, Indonesia and Japan. But Switzerland remains the enduring leader; perhaps because its national symbols — cows, mountains, and fir trees — fit the art form perfectly.”

Today, one of the most popular places to see Swiss papercut art on display is at the permanent exhibition of decoupage at the Musée Chateau d’Oex near Gruyère, Switzerland.

The traditional style of papercut art in China is called jianzhi, now a folk art that originated from cutting patterns for Chinese embroideries. With a history extending over a period of 1500 years, today, it’s used for health, prosperity, and decoration in Chinese culture, and the most common color used for pieces is red. Jianzhi cuttings also emphasize Chinese characters for zodiac animals. 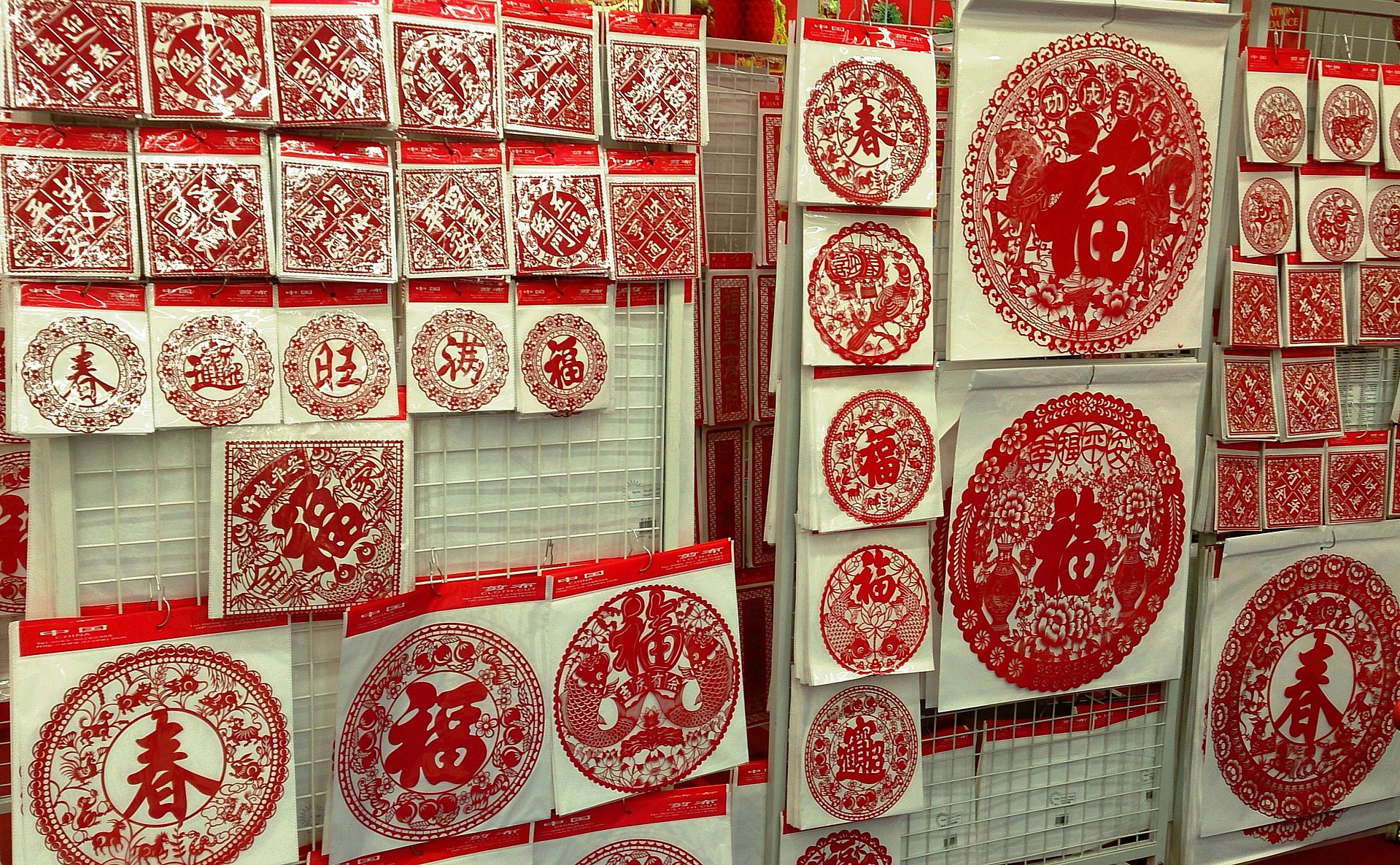 Chinese paper cuttings, with lucky words in Chinese for the Chinese New Year. Image via Project Manhattan on Wikimedia Commons.

Known as Kirie or Kirigami, papercutting is also popular across Japan. It was believed to have emerged in 610 AD, after paper was invented in China, and brought over by a Buddhist monk from Korea.

After commercializing paper making in 800 AD and developing immense skill at it, the Japanese art of papercutting with washi paper developed quickly. Washi paper, in fact, is most predominantly used worldwide for papercut art today, as well as for book binding, tapes, and more. Today, the Japanese continue to practice art by papercut, particularly for framed art, installations, and sculpture.

Judaica papercut art is a traditional form of Jewish folk art, common in Jewish art since the Middle Ages. Spanning Jewish communities in Eastern Europe, North Africa, and the Middle East, it has come to represent customs, ceremonies, and family life, and often was used to decorate marriage contracts, or ketubot (prenuptial agreements), and mizrachs (decoration hung on an eastern wall of the Jewish home, indicating the direction to face in prayer), or ornamental, sacred pictures.

By the 17th century, the art form became a popular way to create small religious artifacts. Later, Jewish papercut art was revived in the 20th century in Israel, and is today most commonly used for the above-mentioned mizrachs and ketubot. Many Filipino crafts have come to incorporate the art of papercutting. For example, a parol (a star-shaped lantern), created by cutting floral designs in colored paper, is often used during Filipino Christmas.

Palabát (or “wrapper”) is another Filipino tradition that involves papercutting, where colored paper is cut with small scissors and used to wrap pastillas de leche (carabao milk candy) and other  traditional candies.

And banderitas, or bunting, is created by papercut art during holidays and fiestas. They’re often hung on homes and over streets, and take the shape of squares and triangles – both elaborate and plain.

Originating from the Aztec people who used mulberry and fig tree bark to create rough paper, Mexican papercutting is called papel picado. This technique involves cutting intricate designs out of colored tissue paper. Mostly done entirely by hand, scissors or sharp chisels are used for this craft. Papel picado is often used for decorative banners that hang over streets or across altars during popular holidays and fiestas, including the Day of the Dead, or Día de los Muertos, Christmas, and Easter. 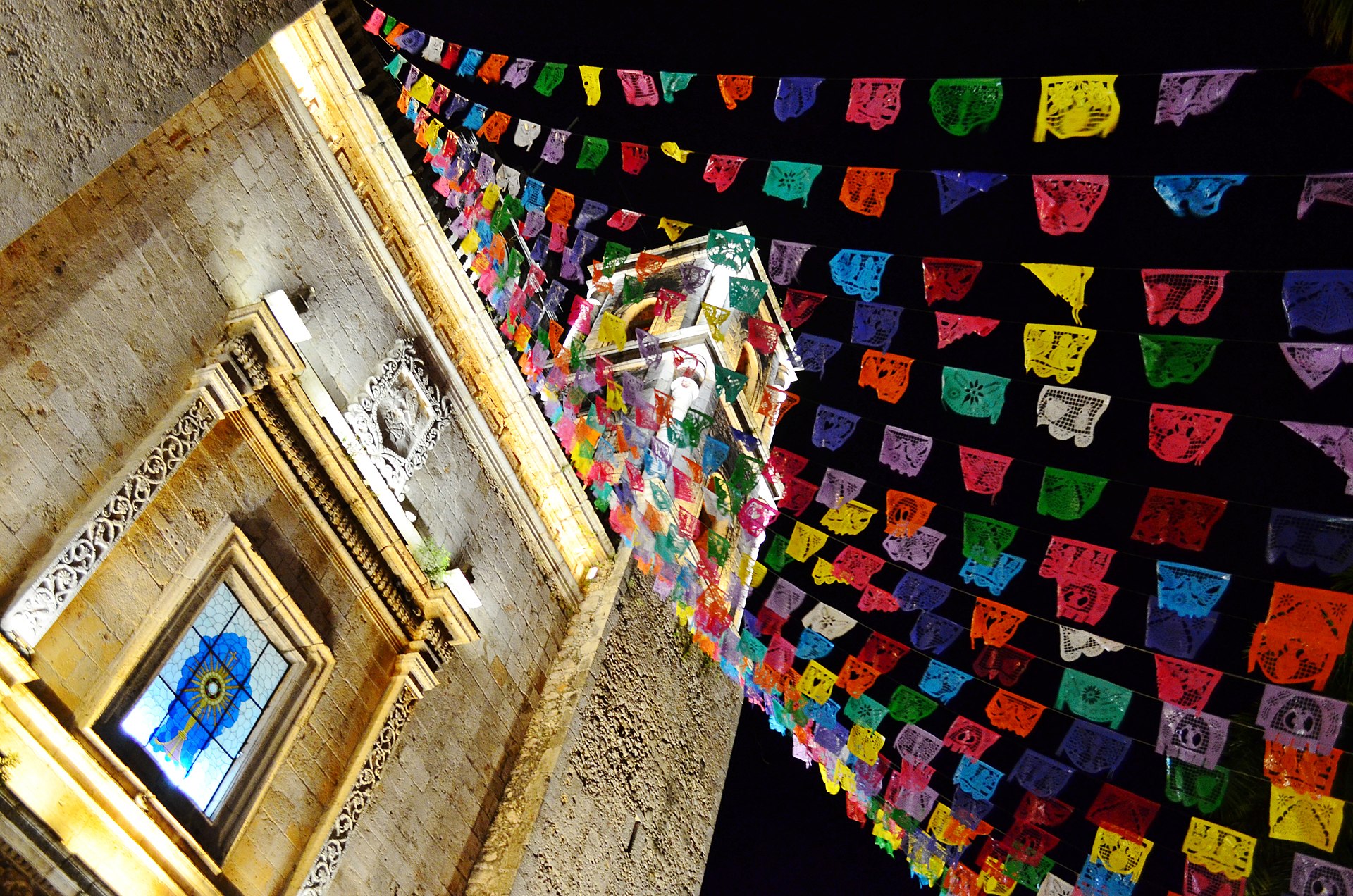 Papel picado is one technique where, instead of one single sheet of paper, multiple sheets of colored tissue paper are used to create papercut art – and often as many as 40-50 sheets are involved. They’re stacked together and used as templates to create up to 50 banners at a time.

Common themes shown in this vibrant, Mexican-style of papercutting include floral designs, birds, and skeletons.

Today, several papel picado artists, most of them women, are well-known and celebrated across Mexico and other parts of the world. Famous artists include: Olga Ponce Furginson, Margaret Sosa, Catalina Delgado Trunk, and Herminia Albarrán Romero.

Swiss, Japanese, Chinese, Mexican, and other countries’ papercut art continue to be created, celebrated, and collected today. Some pieces, like the scherenschnitte of the Swiss, have truly come to symbolize a nation and its people, and continue to be internationally recognized and exhibited in museums.

Examples of papercut art can also be found for sale at art galleries and at auction, and even has served as inspiration for fashion designers and global brands as the art form – particularly the Swiss style – has experienced somewhat of a “renaissance” in recent years. In 2006, for example, Anne Rosat designed a Découpage scarf collection for Hermès. In 2012, artist Ueli Hofer, who helped design the Klötzli scherenschnitt scissors, was commissioned by Nestlé to design chocolate gift boxes. What’s Behind the Demand For Weller Pottery?