The Market for Still Lifes

Though long considered throughout history as the “lowest” genre in the artistic hierarchy, the still life in today’s market frequently fetches prices that are anything but low.

Sotheby’s Old Masters Day Sale in December of 2016 featured a cross-section of old-world gems, including works by Cornelis de Heem and Pieter Casteels III. de Heem is associated with both Flemish Baroque and Dutch Golden Age painting, and his “Still life with a lobster, a peeled lemon on a pewter plate, a roemer, and fruits on a stone ledge with a green drape” realized at £106,250 ($130,500). Similarly, a pair of oils by Harmen Loeding in the same sale achieved a remarkable price of £137,500 ($168,123), far exceeding the lot’s pre-sale estimate of £30,000 – £50,000. 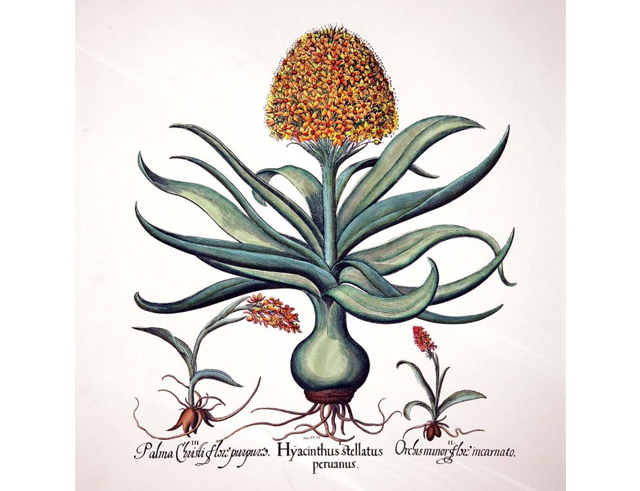 The Origin of Still Life

The origins of the still life can be seen throughout the course of history: decorative murals can be found in Egyptian tombs depicting offerings to the gods, and vase paintings created by the ancient Greeks reveal great skill in illustrating ordinary items and animals. Wealthy Romans displayed “emblema” in their households – these ornamental mosaics advertised the wide variety of food available to the high-born families.

Though still life painting has roots in antiquity, it was the Renaissance where it blossomed into a full-fledged and independent genre. While most of the still life painting of the Middle Ages in the West was created with the primary purpose of supplementing Christian iconography, the lifeblood of the Renaissance gave rise to an interest in secular subjects that would ultimately free the field, and usher in an entirely new landscape of art.

Aided by a scientific interest in the discoveries of the New World and Asia, the association of religious and natural iconography began to diverge. Rich botanical encyclopædias classified a dazzling array of flora, and oil flower paintings caught on as trend around 1600.

Another departure took place at this time in Antwerp, where large “monumental” still life paintings depicting people and creatures marked a shift from the typically small sized works that were commonly found in the genre at the time. 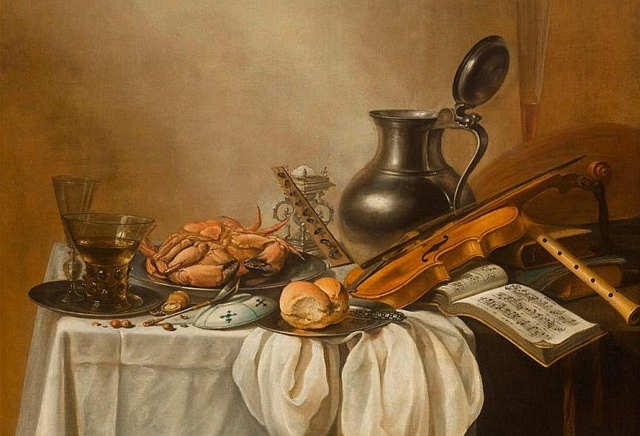 Still life with rummer, wine glass, crab and bread on a platter, with a violin and a flute on a table
by Pieter Claesz, 1644, oil on canvas, Koller Auctions (March 2015)

Vanitas painting became a popular choice for painters and collectors alike. Taking its inspiration from Ecclesiastes passage in the Bible alluding to the vanity of life’s fleeting pleasures and inevitability of death (the passage reads, “vanity of vanities – all is vanity”), these painting styles juxtaposed sumptuous or earthly items like wine and flowers with reminders of mortality like an hourglass or a skull. 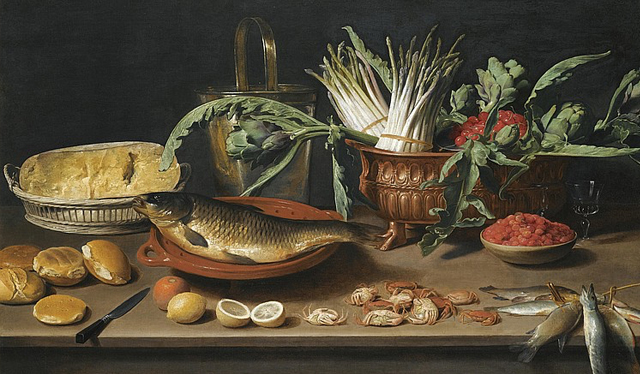 “The Property of a Gentleman” by Jacop Foppens van Es, oil on canvas, Sotheby’s (July 2011) 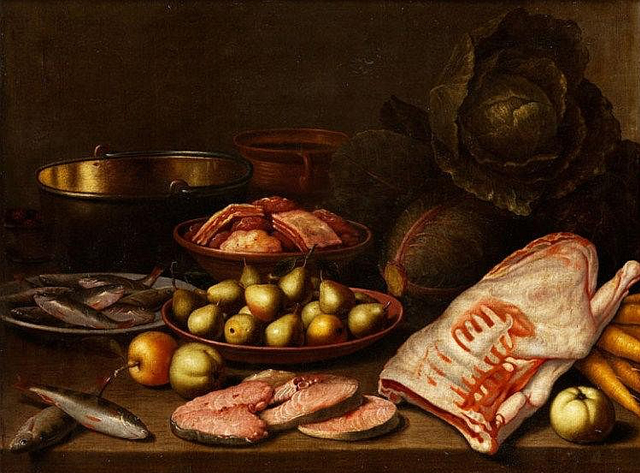 While the prevalence of the floral still life could be found throughout Antwerp, the ontbijtjes or “breakfast paintings” became the trend in Middelburg and Haarlem, popularized by painters Pieter Claesz, Floris van Dyck, and Willem Claesz Heda, among others. The representations of delicious and familiar foods like oysters, ham, fish, bread and fruit arranged on wooden tabletops, presented as delicacies to both admire and avoid with a religious view to eschew gluttony. Though the still life of this era and region often contained a veiled moral directive, the sensual and luxurious textures found in Dutch painting left little to imagination or appetite.

While the still life genre of the Golden Age of Dutch and Flemish culture overflowed with the jewelry, vases, candles, wine and food of sumptuous living, and the skulls, ticking watches, and dying flowers as metaphors for the brevity of life in the face of shallow excess, the symbolism and aesthetics of these classic works inform contemporary artists who now carry forward similar themes from their creative forebears.

Contemporary artists across all media have reimagined the traditional still life with fresh eyes, all while maintaining focus on the everyday objects that inform, inspire and enhance the ordinary existence. Still Life photography has proven particularly powerful for devotees of the genre, since the medium’s efficacy is tied directly to the successful balance of light and darkness. Much like their Old Master predecessors, the contemporary still life photographer’s choice to highlight or obscure a particular object often reveals its allegorical and symbolic significance.

Through modern technology and advances in photography, artists working today have launched the Golden Age of stilleven into the 21st century in diverse and imaginative ways. Social media, computer rendering, and the desire to manipulate the genre with a view to challenge its constraints has led to Instagram accounts bursting with vibrant table settings, computer-generated tableaus, and tongue-in-cheek works where the still life isn’t still at all. 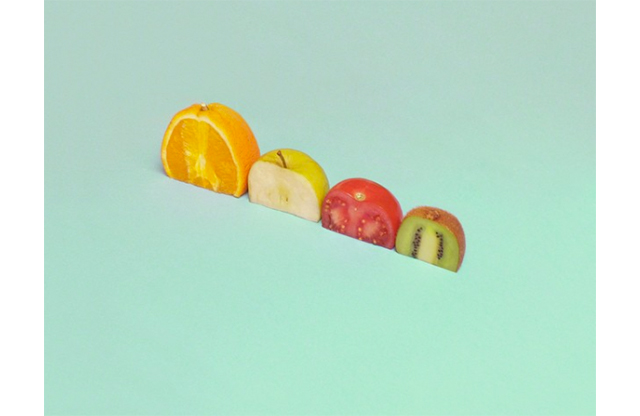 One artist combining the old-world charm of still life with the vivacity of contemporary styling is Spanish photographer Jesús Ortiz (@jesuso_ortiz). Fruit, flowers and a myriad of other objects offer a symbolic nod to Dutch and Flemish works, but with a technicolored landscape in flamingo pink and lemon yellow. Ortiz’s works feature one or two objects at most, stripping back the crowded composition so often found in traditional still life where excessive and showy bounty is the norm. His take on the still life offers a refreshing and bright departure from classic genre color palettes in dark and heavy hues. 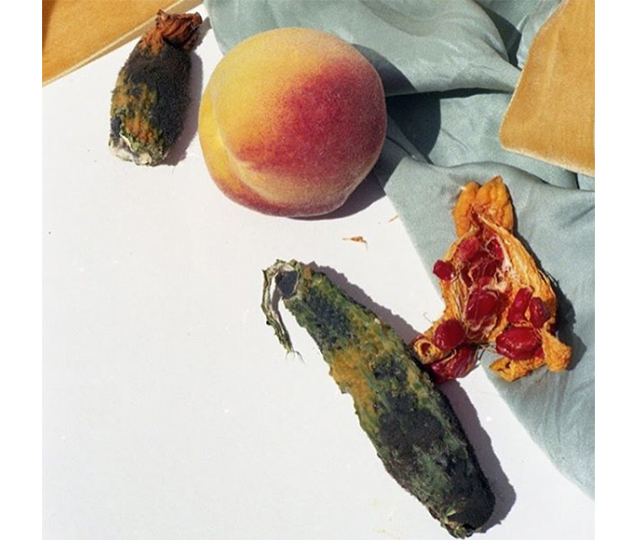 Caption: “I have work in FIGURATIVELY FULL with lots of other cuties curated by
@mayafuhr on now until Sunday.” Photo courtesy @rebeccaastorm, Instagram.

Turning the delight and deliciousness of traditional still life on its head, photographer Rebecca Storm (@rebeccaastorm) exploits the genre’s reputation for homey indulgence by arranging works that offer challenge and discomfort to her audiences. Cigarette ashes, spilled makeup and hair-coated lollipops grace Storm’s still life photography, fusing a multitude of artistic styles; by borrowing heavily from the genre’s elements of Vanitas self-importance and surrealism, objects once delectable and familiar are rendered offensive and strange. 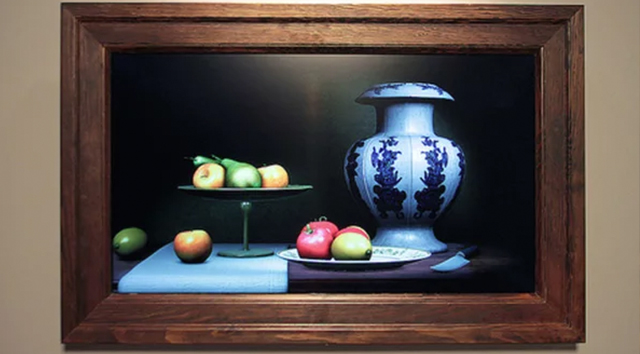 “Still Life” by Scott Garner marks a significant and revolutionary departure for the genre, as it takes the stillness out of composition completely. What appears to be a conventional still life scene is in reality a data-fed television that can be rotated on its axis, causing all of the objects to tumble across the landscape. In a playful and humorous way, Garner’s piece launches the still life headlong into the fourth dimension: it simultaneously underscores the impermanence of life despite one’s careful arranging, while highlighting how technology has forever changed the context in which art is viewed retrospectively.

With continually evolving technology and artists worldwide redefining the genre, the still life is under constant reinterpretation as the creative process pays both homage and lip service to its long history. New media and modes of expression ensure that whatever the objects, be they tidy or tangled, will continue to hold the attention of artists and audiences across all media. What You Should Know About the Art Glass Market