Make room, Maastricht. The European Fine Art Fair (TEFAF), which originated in the Netherlands, has officially taken over a full city block on Manhattan’s Upper East Side.

On Friday, October 21, the Park Avenue Armory opened its doors for a preview of the inaugural New York fair, open to the public from October 22-26. With a breathtakingly modern look to welcome fair-goers, the historic 19th-century brick building has been transformed into an ethereal exhibition space – sheer white drapery lines the entryway walls, individual, freshly cut flowers are hung in tiny glass vases from strings from the ceiling, and three rows of gallery booths fill the main floor. 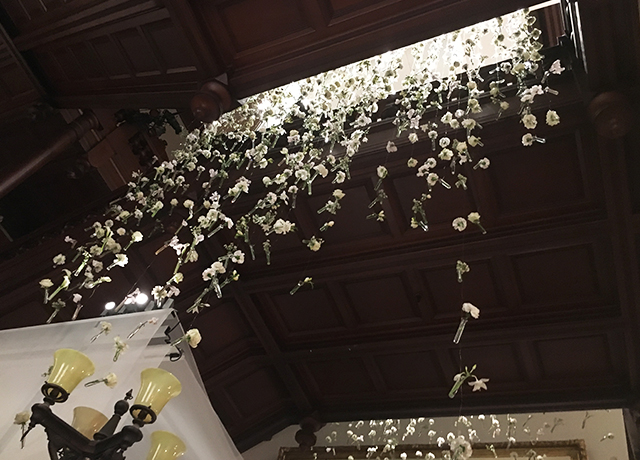 Fresh flowers hang from the ceiling of the Park Avenue Armory at TEFAF New York 2016.

A carefully selected group of 94 international dealers – 11 of which are exhibiting on the second floor in the newly opened, rarely-seen period rooms – brought with them their best works of fine and decorative art, antiquities, and jewelry. Before the start of the fair, a team of experts, with eyes only for the absolute best, vetted each and every piece.

In search of the most remarkable objects (and booth design) our team took to the carpeted corridors and tucked-away rooms of the Armory. With the help of a few exhibiting dealers who crossed our path along the way, we’ve compiled some of our must-see moments at TEFAF New York. Join us on our journey. 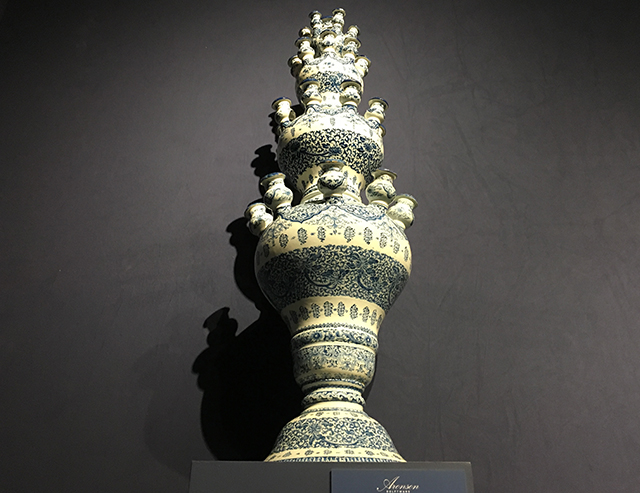 A bouquet fit for a queen. “The 17th century was really the heyday for flower vases in the Netherlands,” says Celine Ariaans, gallery manager at Aronson Antiquairs. “When King William and Queen Mary were living in the Netherlands, the Queen was very passionate about Delftware and gardening. She ordered flower vases for her palace gardens. This one in particular is stacked, made up of four individual pieces. We know of three in existence of this particular size and shape, and this is one of them. It’s truly amazing, which such delicate paint, and was properly made in the factory of the White Star.” 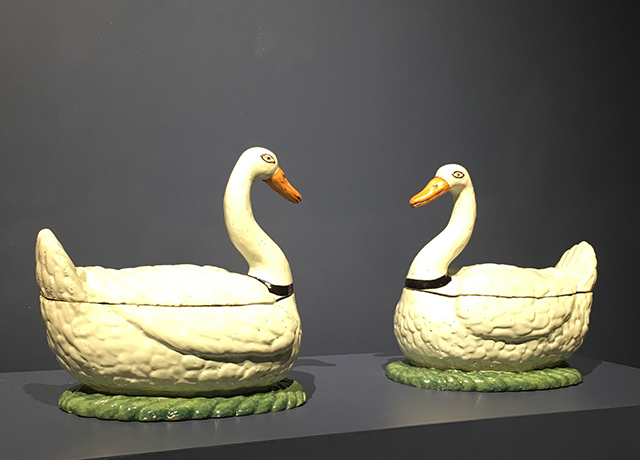 Another standout piece at Aronson was a pair of large tureens. “You see them often in Meissen and in porcelain, but the Delft factories rarely made such pieces. This is the only swan piece that we know of. Interestingly, at the time when these were made in the 18th century, eating swan was out of fashion. Swan, however, was still considered a noble animal, which is likely why they made these tureens,” says Ariaans. 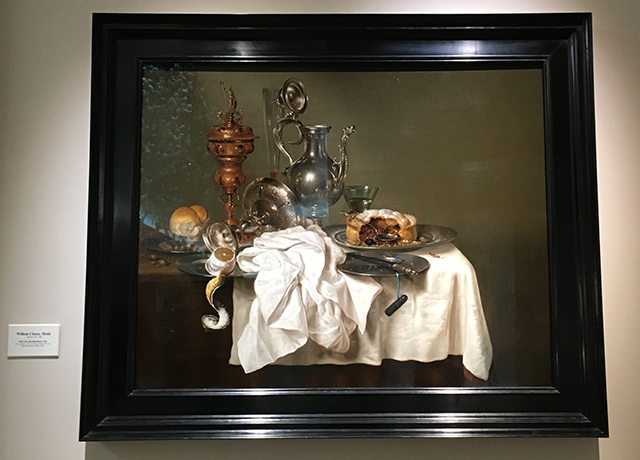 A sweet treat for the senses was a still life by the Dutch Golden Age artist, William Claesz. Heda. This standout work on offer at French & Company, a New York gallery representing European paintings from the 16th through 20th centuries, is a perfect example of Heda’s skill in depicting reflection and light with curved objects “He was arguably the most important still life painter,” says Henry Zimet, President of French & Company. “It is a really tremendous example of his work, and in great condition. There’s such incredible detail and use of empty space.” 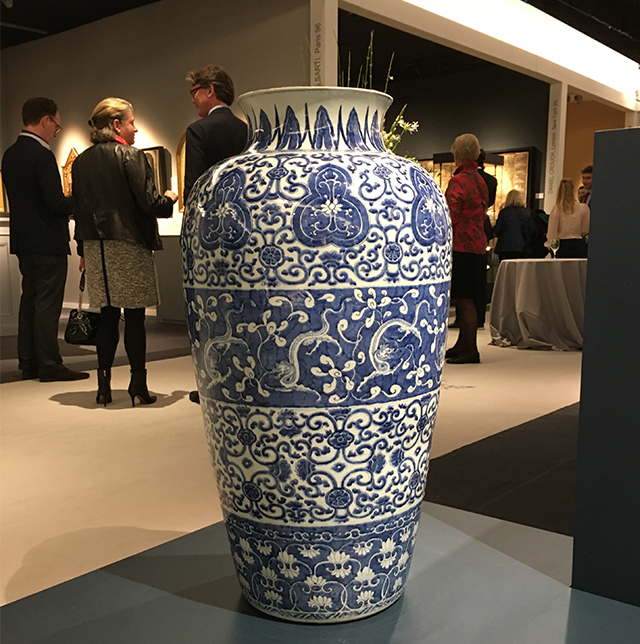 Occupying a corner space on the main floor, Jorge Welsh Works of Art’s stunning display of Chinese export porcelain certainly turned heads. Pictured above is one of our favorites: a large, rare Chinese blue and white porcelain “soldier” vase from the early 18th century. This cylindrical shape was one of the new forms that emerged at the start of the Kangxi period (1662-1722). According to a Jorge Welsh specialist, the size of this vase makes it very uncommon; there are similar, smaller works in existence today, one of which lives at the Metropolitan Museum of Art, but the size of this example makes it particularly notable. 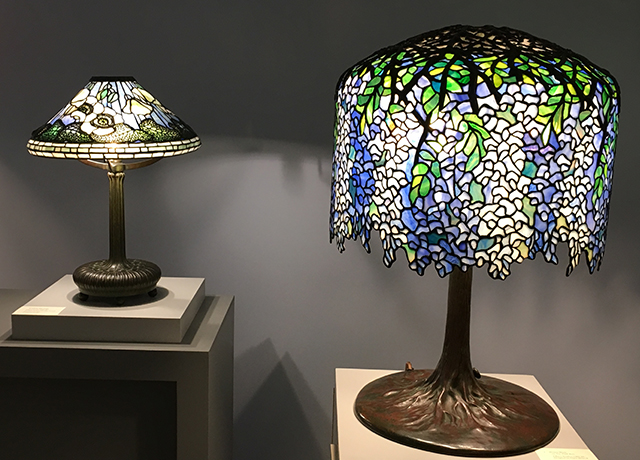 We spoke with Lillian Nassau Gallery, a renowned dealer of Tiffany Studios lamps, Tiffany Studios favrile glass and pottery, and Tiffany Studios windows. Crowd favorites from the gallery are two perfectly paired Tiffany Studios table lamps: one, a Wisteria, and the other, a Poppy, each of which is displayed, among their companions, with a strategy.

“We have to plan out booth lighting in advance. You can’t have [exhibition] light bouncing off of the light transmitted from the lamps. We’re very specific about lighting, and this is a brand new design for us,” says owner Arlie Sulka. “We have had some incredible displays at shows in the past, and we were perfectly happy with them. But for TEFAF, we wanted to do something different in celebration of being here.”

Impressed by the turnout just 30 minutes into the preview event, Sulka added she has high hopes and expectations for the fair. “TEFAF has such a great reputation; everyone wants to be a part of it. I am incredibly thrilled to be here among so many distinguished dealers.” 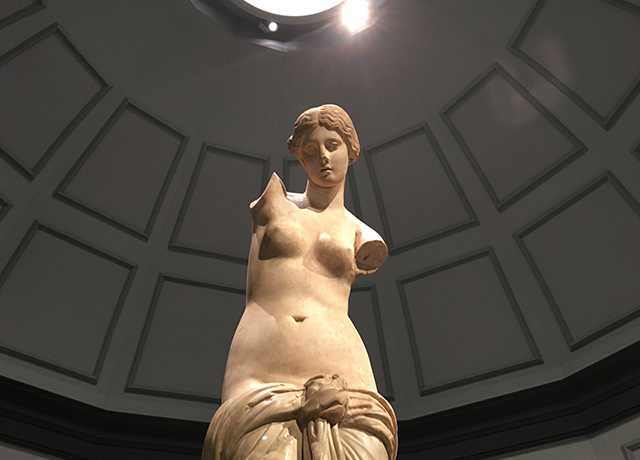 Remarkable for both its works of art as well as its innovative booth design is Phoenix Ancient Art, a sure crowd-pleaser at this year’s fair. Given pride-of-place is a rare Graeco-Roman marble sculpture of goddess of love Aphrodite. From a few booths down the corridor, you might spot Phoenix Ancient Art by its towering half-dome ceiling, part of a one-of-a-kind booth design that fits with the dramatic, central piece.

The sculpture depicts the goddess emerging from the sea, fixing her wet hair, known because there similar, complete marble statuettes are still in existence, says a gallery specialist at Phoenix Ancient Art. “This is one of the most important large statues of this type.” 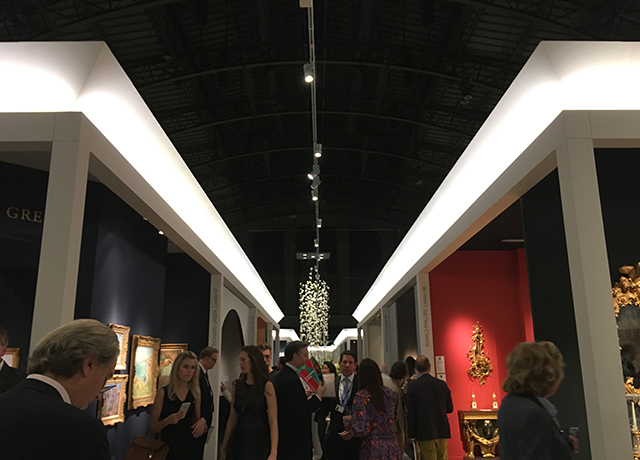 From inventive booth design to avant-garde framing techniques to dramatic lighting, exhibitors at TEFAF New York offer a brand new context (and conversation) for works of art not produced in our time, solidifying their place in the hearts of collectors.