Numismatics, known more colloquially as the hobby of coin collecting, has become a global industry. According to the Professional Numismatists Guild, the rare coin market in 2015 was worth an estimated $5 billion in the U.S. alone – not counting mint sales. Contributing to that $5 billion figure were twelve individual coins that sold for over $1 million in 2015, including a 1787 Brasher Doubloon and a 1913 Liberty Head nickel.

Whether you start out with such purchases or enter the hobby of coin collecting through family legacies, knowing how coins are graded allows you to better validate professional gradings and assemble high-grade sets.

Grading coins is a surprisingly recent innovation: prior to the 19th century, coins were not graded by their collectors beyond a simple new/used dichotomy. As coin collecting expanded in popularity, coin grades began to be stratified in higher detail, with word grades ranging from Poor to Gem Uncirculated assigned to specimens. In the 1940s, this system evolved when Dr. William Sheldon established a 1-70 numerical system and applied it specifically to U.S. Large Cents. This system was adopted into wider use and is the main system used today.

There are four major professional grading services: PCGS, NGC, ICG, and ANACS. While collectors are certainly welcome – and encouraged – to grade their own coins, these four services are typically used to grade high-end examples of older or rarer coins. These companies are professionally recognized by dealers, auctioneers, and fellow collectors everywhere through their rigorous grading processes, as well as for the durability of their sealed containers. These professional grading services are worth looking into if you find or acquire a particularly old or rare coin and wish to afford it a higher degree of prestige and protection.

Let’s look closer at the actual grades themselves. The significant benchmarks are:

Poor-1: Coin is identifiable only by its date and type.

Good-4: Most to all detail is worn flat, and the rims are also worn, but most lettering is visible, if not particularly clear.

Very Good-8: Design is worn, but has some detail and is not flat. Legends are clearer than G4.

Fine-12: While wear is noticeable, the coin and most legends are still clear. This is the first grade that is typically considered pleasant to look at, if not desirable.

Very Fine-20: The wear on the coin begins receding to the higher, finer points. Most of the low-level details are intact. Higher VF grades frequently demand sharp lettering, as well.

Extremely/Extra Fine-40: The coin still has light wear, but all details and lettering are sharp and clear. This is the first grade where coins may still have some luster to them.

About Uncirculated-50: Wear is basically a trace element at this point. Now, other criteria, like luster, take over. An AU-50 coin must have roughly half of its original luster.

Uncirculated-60: All luster remains, although surface wear, spots, and scratches detract from a higher grade.

Perfect Uncirculated-70: Very few coins intended for circulation are ever found in this condition, which is basically gem perfect. There can no trace of wear or contact marks on a coin of this grade. 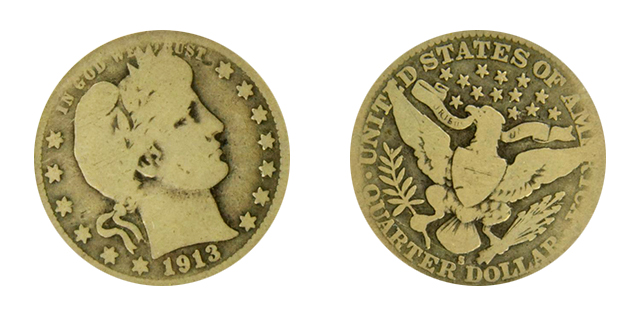 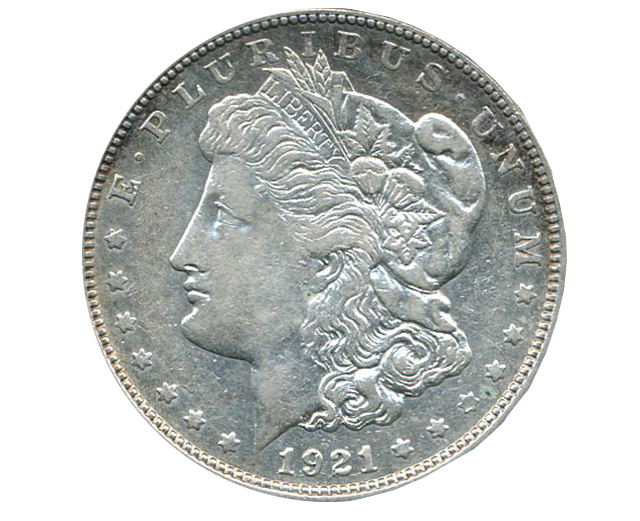 Most older coins from before 1950 or so are in the Very Good to Extremely Fine range, which encompasses thirty-two numerical grade points. After about 1950, coins are more commonly found in nicer conditions, due to a wide range of factors including redesigns, improved materials, larger mint productions, and more. Following are some sample coins which have not been professionally graded to illuminate the grading process.

The above nickel was pulled from circulating coinage. There are many scratches present on the face of the coin from bouncing around in pockets. And while the lettering and general details are still crisp, most of the finer details have worn flat. This is especially evident in Jefferson’s hair, which is one of the most important details for grading the obverse of this type of coin, along with Jefferson’s cheek bone and collar.

Like the obverse side, the reverse bears many contact marks across its surface, with an especially deep one just to the left of the Monticello dome. Most of the lettering remains sharp, but the C and E in FIVE CENTS has begun to wear flat. The most important details for the reverse of a Jefferson nickel are the triangular arch under the dome, the stairs in the front center, and the pillars. For this coin, all of these details are worn very flat: the stairs are completely gone, as is half of the arch. The pillars remain strong, but this one facet is not enough to carry this coin to a higher grade than VF-20.

This quarter was also pulled from circulation. Unlike the nickel, however, it is in somewhat better condition. While there are still some contact marks present, they are much fewer in number and much shallower, perhaps due to seventeen fewer years of circulation. Most of the important grading data for the obverse of a Washington quarter is contained within Washington’s hair. The various hair lines are a significant detail, as is the specific boundary between his forehead and his hair. This quarter features most of these hair lines, and the boundary is clean and distinct.

The reverse of this coin (right) is slightly more telling. While there are fewer scratches than the obverse, the reverse features more wear. Grading the reverse of a Washington quarter is based heavily upon the wear present on the eagle, especially the feathers upon its breast, legs, and wings. While most of the feathers are visible, they are clearly worn and have begun to lose their borders. This coin is likely in the extremely fine range, however it is somewhat better than an EF-40. It would probably return between an EF-42 to an EF-44. 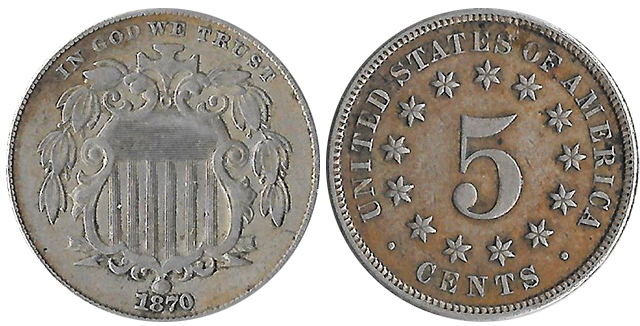 Here is an example of a shield nickel, which ran from 1866-1883. Shield nickels were notably the first “real nickels”: coins made out of a copper-nickel alloy. The central shield motif itself, as well as the leaves surrounding it, consist of the most important details here. The shield features both horizontal lines at the top, as well as vertical lines down the middle to bottom. For a shield nickel to achieve a strong grade, both sets of these lines must be distinct, although a little wear can be forgiven for a coin in the extra fine range. The details within the leaves along the outside edge must also be crisp.

The reverse side (right) is much simpler in design than the obverse, and so has slightly less bearing on its grade. The details on the stars are the most important thing to notice, as well as the sharpness of the lettering and the numeral. Although the coin is slightly dirty around the top edge, all of these details are sharp and clear. Coupled with the above average obverse, this coin would likely come back from a grading service as an EF-40. 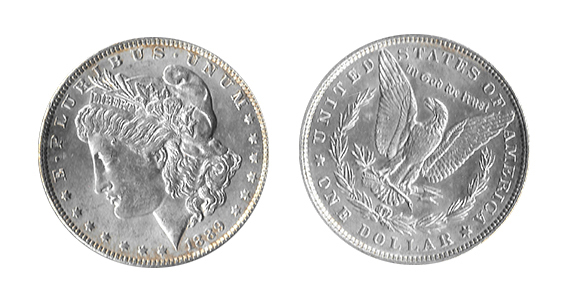 Morgan silver dollars like the above are fun to grade due to their large size and elegant design, which features lots of easily worn elements. One of the biggest challenges when looking at a nice Morgan is that they were plagued by striking issues, with very high-level details frequently not striking properly at the mint. It can be easy to confuse this with circulation wear. The easiest way to discern this is to look at the coin’s luster. If luster is missing, especially in the cheek on the obverse and the eagle’s breast feathers on the reverse, the coin has circulation wear. Otherwise, it just had a weak strike. This particular Morgan has very crisp details on the obverse, with a lustrous cheek and clear hair lines, especially around the ear, which is a noteworthy point for this particular type of coin.

The reverse of this coin (right) is also quite stunning. There is a little tiny bit of wear in the eagle’s left wing, but its right wing and breast are both close to pristine. Much of the original mint luster is still present on this coin, as well. Due to its clean details and bright luster, this Morgan would at least score an AU-50. A higher grade than that would be dependent upon just how subtle the left wing’s wear is, and whether that could be a weak strike spot or not. Some of the dirt around the edge would also injure its grade, as would the tiny scratch just above liberty’s cap on the obverse.

Each collector favors different types and nationalities of coins, but whether you seek only the finest professionally graded specimens or lower condition coins in exchange for readily completing sets, being able to critically examine and grade coins for yourself is a valuable skill to learn for any serious collector.

Valuable Coins in the US: Everything You Need to Know Valuable Coins in the U.S.: Everything You Need to Know