Clean-lined Scandinavian décor is beautiful, but functional above all. It’s built to last and to make life easier, with such efficiency that it has become ingrained in our concept of what a modern home interior looks like. But there’s something more, something deeply human in the spirit of these works which continues to connect us to them.

Ikea’s contribution to fast furniture aside, the past few years have seen a renewed interest in all things Nordic in the interior design world; particularly the Danish modern style.

At the Northern tip of Europe, the citizens of Denmark, Norway, Sweden, and Finland developed a shared vision of design which was at once humanistic and functional, reflective of their shared cultural and physical climate. Surrounded by a sparse landscape of long, dark nights and ample natural materials, they contrived practical, useful interiors which maximized natural light through a sparse palette of white walls and raw, untreated wood.

Starting in 1947, a series of international design exhibitions introduced the style as a design movement around the world. In Milan, the 1947 Triennale di Milano design exhibition showcased Nordic furniture, glassware, and lighting to great effect. Following its success came the 1951 Scandinavian Design for Living exhibition at Heal’s Furniture showroom in London. From 1954 to 1957, Americans and Canadians flocked to see the model showrooms of “Design in Scandinavia” as it made its way through major cities of North America. They left with Scandinavian design added to their vocabularies and high hopes for the efficient post-war solution of affordable, streamlined home décor which didn’t skimp on personality.

A look at some of the key designers who shaped this movement, featured in Artcurial’s upcoming Scandinavian Design sale, sheds some light on how to incorporate its design principles into your home. Perhaps, you’ll find a piece which speaks to you directly and makes your daily life simpler and more beautiful. As lauded Swedish designer Josef Frank said: “The home does not have to be planned out in detail, just put together by pieces its inhabitants love.” 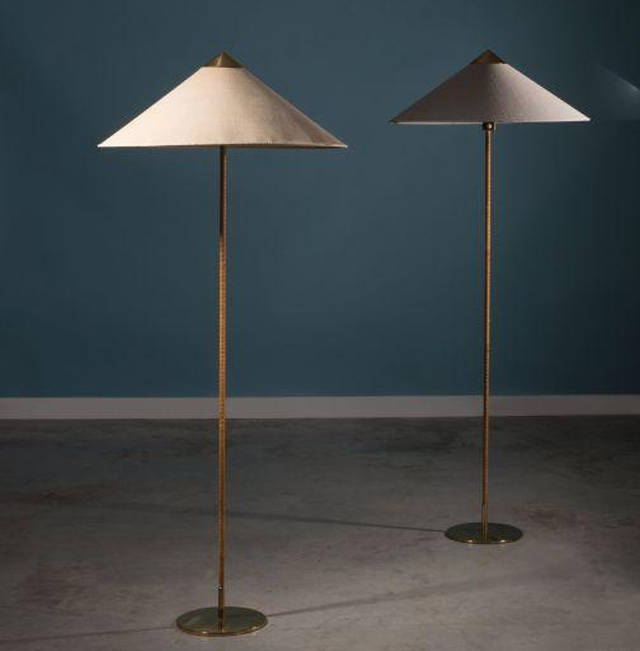 Paavo Tynell was known in his home country as “the man who illuminated Finland,” and as the head designer of Taito Oy, Finland’s first industrial light manufacturer. Brass became his signature material immediately after World War II, largely due to the fact that it was one of the few materials widely available at the time. During the scope of his celebrated career, he collaborated with architects Eero Saarinen and Alvar Aalto and designed the lighting for the UN Secretary General’s office in 1955.

His diminutively scaled works have been long since been appreciated by collectors worldwide for their unique blend of traditional and modern design elements. His work is currently experiencing a surge in popularity, and this pair of brass and rattan floor lamps are representative examples of his work. 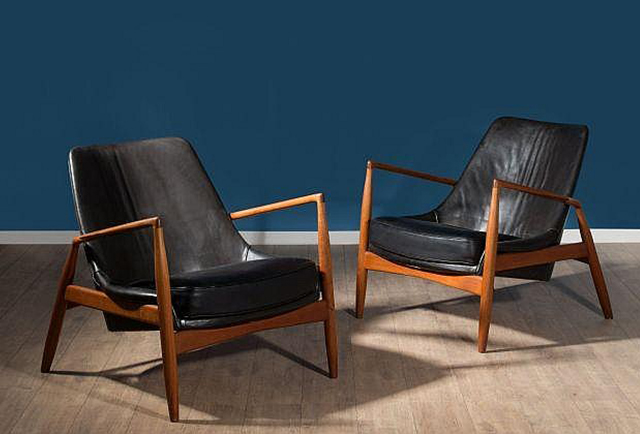 Danish designer Ib Kofod Larsen’s designs are also experiencing a surge in popularity. They were first popularized as commissions for the British furniture brand G Plan in the early 1960s. Both a talented architect and furniture designer, Larsen became most famous for his mid-century modern pieces.

Larsen’s designs would pair well with modern minimalist pieces you already own. It’s not a stretch to picture a Kofod-Larsen piece in a haute 2016 bachelor pad with a lux stereo system reverberating off of its sparsely decorated walls. 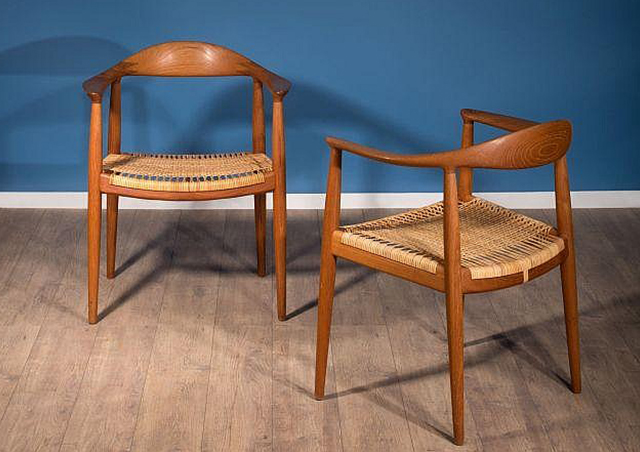 Hans Wegner was a master furniture joiner, and famously hands-on experimenter who believed in comfort before style. Creating miniature models of each chair he designed, he let the materials speak to him. Industrialization and mass production came relatively late to Sweden, which may account for its rich heritage of craftsmanship clearly seen in this piece.

A loyalty to the use of natural materials like linen, cotton, and light wood with natural character will keep your interior in line with the Scandinavian design aesthetic. Of course, the choice to use eco-friendly materials has become newly relevant, and sustainable furniture is a trend in itself. 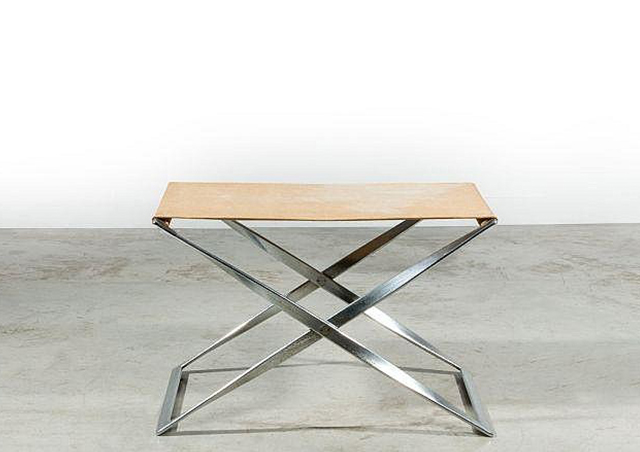 The Danish designer Poul Kjærholm is responsible for a legacy of award-winning PK Series chair blueprints. Original Kjærholm pieces are prized in museum collections from New York to Germany. He famously touted the virtues of steel at a time when his peers were faithful to wood as a symbol of Danish design integrity. His use of steel was always in combination with other materials of contrasting textures such as leather.

Kjærholm’s brand of Danish modern blends beautifully with the Modern Industrial aesthetic. Furniture with a blend of natural and industrial materials lends itself to this trend, and would look at home in a modern loft with exposed metal pipes and brick walls. 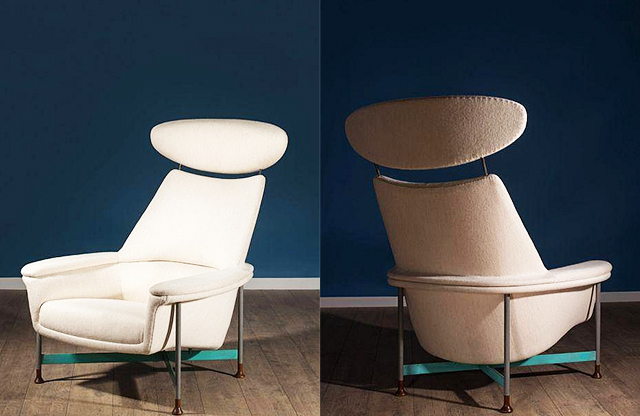 Danish architect-turned-designer Finn Juhl essentially introduced the Danish Modern style to America. He is often called the “Father of Danish Design” because of the impact his masterworks had on the definition of the style during the 1940s and 1950s. Finn’s furniture designs are minimal yet playfully organic, typifying the Danish Modern aesthetic.

According to Artcurial specialist in Scandinavian Design, Aldric Speer, this rare armchair up for auction is a one-off and was presented in collaboration with Niels Vodder at the 1957 Copenhagen Cabinetmakers’ Guild Exhibition alongside a coffee table. After the exhibition, it was sent over to Georg Jensen’s shop in New York then joined a private collection. The sketch of this armchair is currently housed at the Danish Design Museum.

Note the bright green enamel added to the underside of this chair’s metal legs: Juhl’s catalogue of works will show that he did not shy away from carefully placed bright colors. 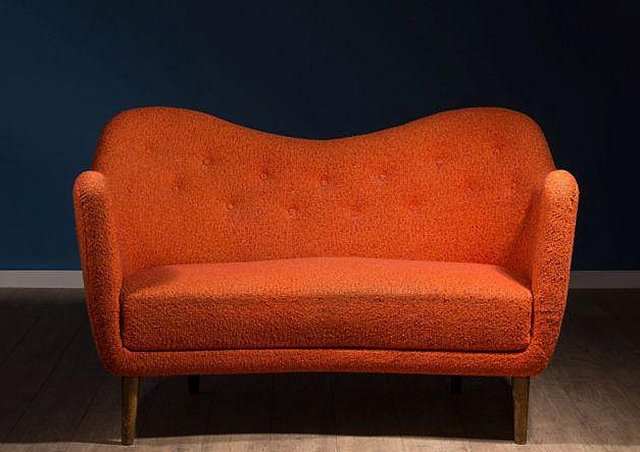 Orange was, of course, a popular accent color at the time, and orange is now hip again as the Danish Modern trend comes back into the popular vernacular. Strategically splashing pops of color on a sparse white background is a hallmark of the look, and is perhaps the easiest way to achieve it in your home. 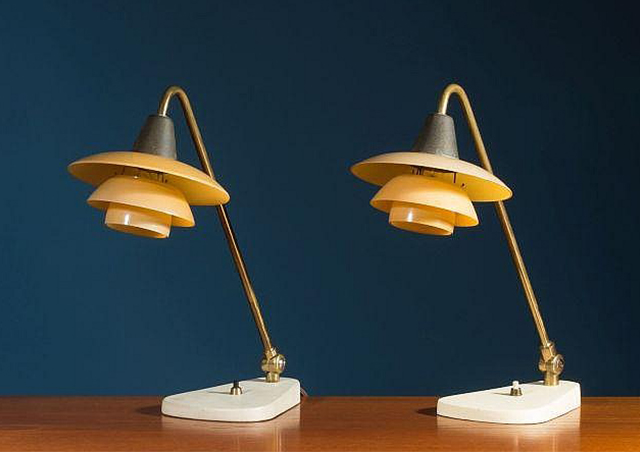 Poul Henningsen is known for his eponymous PH lamps, the first of which he designed in 1925. At a time when the Danish citizens’ eyes were still adjusting to the switch from gas or candlelight to the harsh electric bulb, his innovative lampshades gave a softer glow.

If you’re after the look of a genuine Danish modern interior, a vital step is to maximize natural light in your home by eliminating unnecessary window dressings. Then, swap out your modern fixtures for the softer look of vintage lamps designed with sensitivity and artistry. Not Your Nana’s Florals: Why Wallpaper is Making a Stylish Comeback
Recent Posts
Categories