When does vandalism become art? For some, it’s when a doodle in a bathroom stall makes them smile; for others, it’s the moment they encounter a large-scale painting on an unlikely street corner. Street art has a long and controversial history, but in recent years it has evolved and been reinvented as a high art form. More and more, artists who appropriate public space are also harnessing market forces for their own gain. 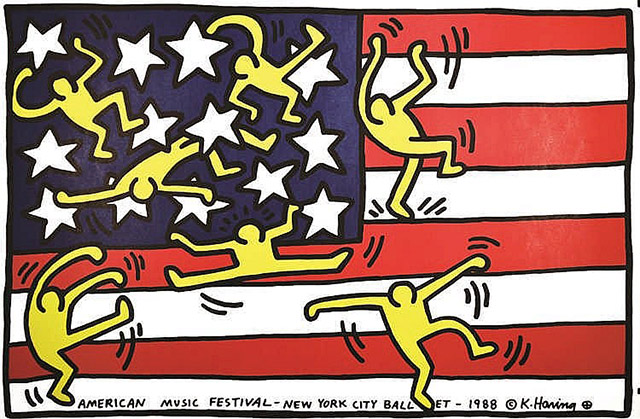 The term “graffiti” often refers to guerrilla artwork on inner city walls and train lines, a movement popularized in the late 60s and 70s. One of the earliest forms of graffiti was “tagging,” or the use of elaborate typography to encode the painter’s name on the sides of buildings or subway cars. Artists got extra points for tagging inaccessible locations, often at great heights, and taggers competed to make their mark better than their competitors. This insular group determined skill by evaluating control of the spray paint and developing their unique typographical marks.

From the beginning, this art form was meant to be transgressive: in a world dominated by global branding, graffiti alienated the power of commercialism and government infrastructure. Street art was often viewed negatively by politicians and more affluent communities because it was associated with gang culture, but the artwork served as a way for disenfranchised groups of citizens to express their dissatisfaction with society. 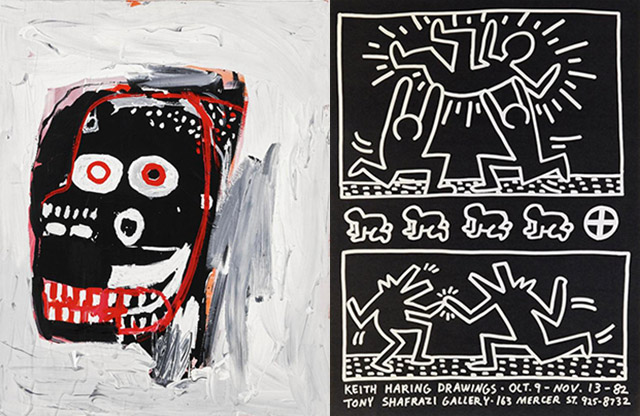 Street art was also closely tied to hip hop culture. As such, many of the artists began working in New York, but the medium rapidly expanded to urban centers across the United States. Rap legend Fab 5 Freddy was intimately tied to the graffiti community through artists including Keith Haring and Jean-Michel Basquiat.

Haring has become a household name in the history of street art, best known for his public art installations on subways in New York in the 1980s. His style was distinct – he was known for bold outlines, vivid colors and his signature “radiant baby” motif. Like many street artists, Haring’s work was inseparable from his activism. He was influenced by the AIDS crisis to create work that sent a message to society about the danger of prejudice.

Haring’s friend and fellow art world darling, Jean-Michel Basquiat, began his career by spray-painting enigmatic epigrams on the Lower East Side of Manhattan in the 1970s. By the 1980s, he had befriended fellow artist Andy Warhol, and the two became frequent collaborators. Underscoring the significance of the street art movement, the Whitney Museum of American Art held a retrospective of Basquiat’s work in 1992. Today, his pieces reside in the private collections of nearly every major institution and in the private collections of many prominent collectors. 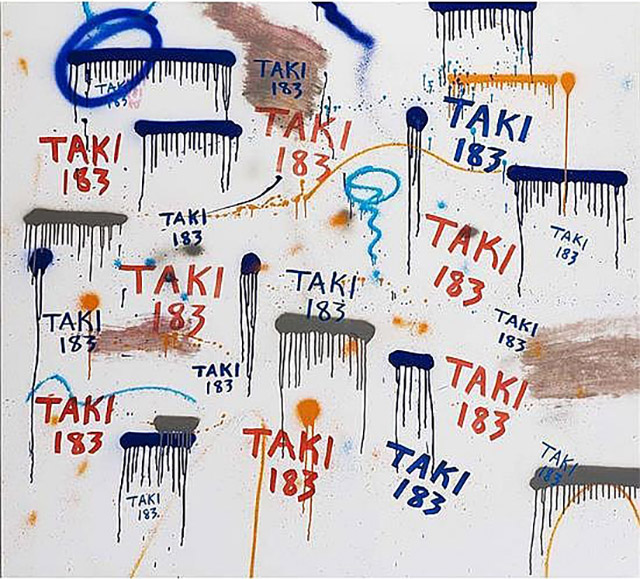 As graffiti spread beyond New York City, each city developed their own hometown heros. In Washington, D.C. it was Taki 183, a moniker that combined his nickname and the number of the street where he lived. Now, Taki 183’s canvases sell for thousands at auction.

Renowned contemporary artist Barry McGee is considered to be one of the most pivotal members of the street art movement. Born and raised in San Francisco, McGee’s work is inspired by the bold, cartoon-like forms many other graffiti artists used. He uses his pieces to draw attention to the large homeless population in the Bay Area. McGee’s work was included in the 2001 Venice Biennale, and soon after, works by the artist began appearing on the secondary market, and soaring in value. His wife, fellow artist Margaret Kilgallen, was also a strong voice in the street art community before her death in 2001 and is one of the few female artists recognized in the field.

Graffiti Across the Globe 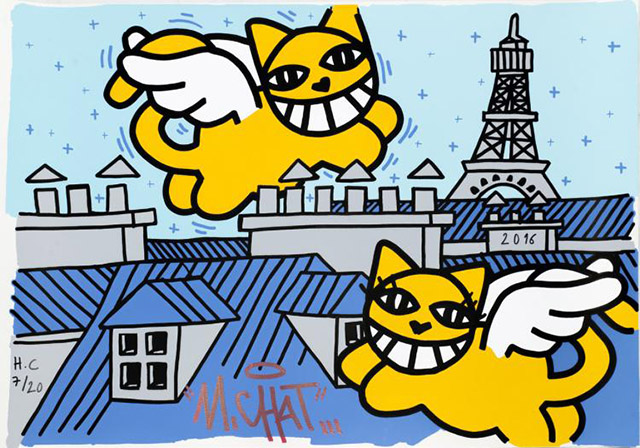 From its humble beginnings, graffiti evolved in several directions: some artists began using stencils to create more elaborate works including portraits and landscapes, while others continued using spray paint to put up murals around their cities.

Street art also began appearing internationally. In the early 1980s Blek le Rat pioneered stencil art in Paris. The artist’s rat stencils alluded to the controlling nature of state power in the French capital city and served as a way to bring art out of the traditional gallery setting. His use of ready-made stencils let him work quickly and evade arrest.

‘This is a pipe’. In this humorous 2011 work, street artist Banksy subverts one of the most famous #Surrealist paintings of the Twentieth Century; and#39;La trahison des imagesand#39; (1928) by René Magritte. Magritteand#39;s painting scrutinised our perception of pictorial representation and what defines our concept of reality, depicting an image of a pipe above the French for “This is not a pipe”. Here, Banksy replaces the painted smoking pipe in Magritte’s work with a three-dimensional plumbing pipe, adding an equal layer of irony and dissolving the Belgian artist’s thought-provoking dichotomy of what we see and what we know. and#39;This is a pipe’ hints towards the ability of #art to manipulate and distort truth, just as much as to reveal it. See it on view in our #London galleries this weekend. #SothebysContemporary #Banksy #RenéMagritte

In Britain, street art has become synonymous with the name Banksy. The artist, whose identity is his most deeply guarded secret, was directly influenced by Blek le Rat to create politically-charged stencils and installation pieces. Banksy began to create his pieces in Bristol in the 1990s but now travels around the world to find backdrops for his pieces. Far from his humble beginnings, Banksy is now the subject of a critically-acclaimed documentary, Exit Through the Gift Shop, and has a prolific line of made-for-sale works on the secondary market.

As his star rises, Banksy’s street installations disappear more quickly. Owners of buildings with Banksy murals either destroy or preserve the works for sale. Most street artists, however, will only sanction the sale of their works if they created the piece specifically for that purpose.

Brazilian twins Os Gemeos discovered graffiti through hip hop and were greatly inspired by Barry McGee, whom they met while he was visiting Brazil in 1993. Their large-scale murals have appeared at Art Basel Miami Beach, Tate Modern, and at the Institute of Contemporary Art, Boston. 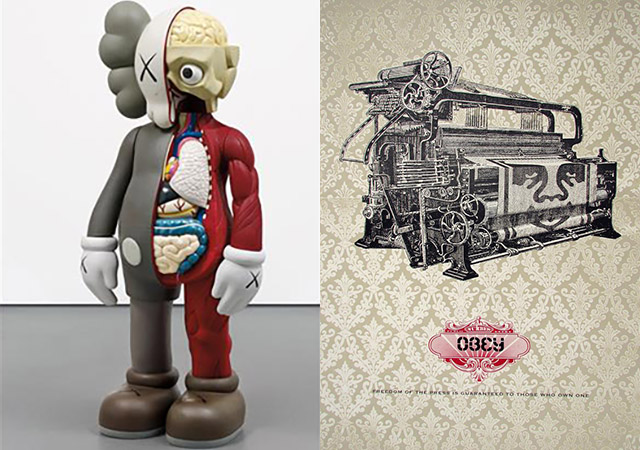 Street art and graffiti techniques continue to evolve. Artists like KAWS, who designs vinyl toys and clothing, and Vhils, who creates his work by removing layers to reveal optical portraits, are among contemporary street artists gaining popularity today.

Many artists working today have achieved mainstream success, like American artist Shepard Fairey and French artist Invader. Fairey first gained international attention during the 2008 U.S. presidential election with his now iconic “Hope” poster, which features then-presidential candidate Barack Obama. Just eight years later, his work is now featured in the permanent collections at the Smithsonian Institution in Washington, D.C., the Museum of Modern Art in New York, and in the V&A in London. 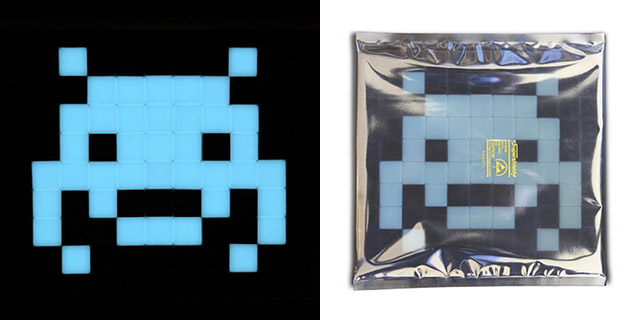 Invader’s pixelated video game-like installations have appeared in over 65 cities, in major gallery exhibitions, and at auction. Despite this success, these artists and their contemporaries still find themselves on the wrong side of the law for their sometimes unsanctioned public displays.

Street art’s fundamental appeal is twofold: it contests hypocrisy and inequality in society as it serves as self-affirmation for artists whose oeuvre lies outside the traditional scope of fine art.

While still divisive in its treatment of urban architecture, street art has nonetheless become an economically viable form of art. In 2014, Phillips sold Banksy’s Submerged Phone Booth (2006) for £722,500, then the third most expensive Banksy sold at auction and the artist’s highest priced sculpture ever offered. In that same year, Sotheby’s auctioned an untitled Keith Haring canvas from 1986 for $4,869,000. These top-dollar examples demonstrate that what emerged as a grassroots movement has evolved into an internationally-recognized art that collectors will continue to compete for at the highest level. Where to See the Best Public Art