Rotary telephones, parlor radios, and silver cigarette cases: what do these have in common? In their prime, they were once considered household essentials intended for daily use. But despite their vital status in centuries past, today, they are more likely to be found on the shelves of antique shops and galleries as decorative objects and artifacts of their time.

In search of unique objects with storied beginnings, our editors took to Birmingham’s Antiques for Everyone Fair to scour the booths of over 200 dealers from across the United Kingdom. What they found was a wide range of collector’s items, including ceramics, glass, silver, and decorative and fine art, but three objects stood out from the rest. We spoke with three antiques dealers to learn about the stories behind these obsolete treasures.

Exhibitor Ken Yeomans of Heritage Collections, based in Derbyshire, exhibited an extensive collection of small antique enamel boxes. “People assume they’re all pill boxes, and that’s the generic term that we’ve come to use for them, but they actually had a range of uses depending on medicine and fashion at the time.” 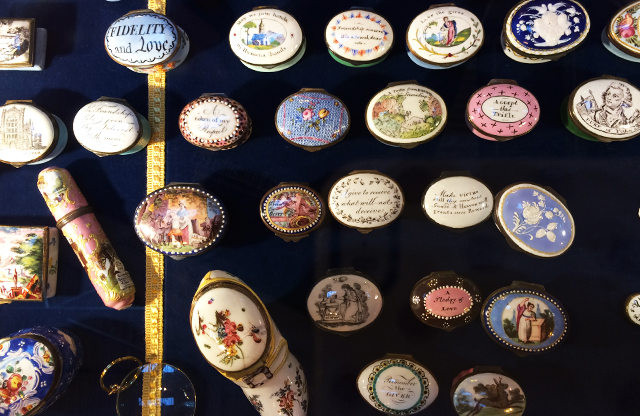 He goes on to explain that those with mirrors may have been Patch Boxes, designed to contain the patches that became a fashionable beauty accessory in the 17th and 18th centuries, although were originally designed to hide the marks and residue left by smallpox and syphilis (a good example of these can be found in part 3 of A Rake’s Progress by William Hogarth at the John Soane Museum in London). But along with the discovery of cures for these diseases in the late 19th century died the demand for patch boxes, which means that these small boxes have become a rarity today.

Snuff boxes are also frequently confused with pill and patch boxes. One possible clue to distinguish a snuff box is that it will contain no mirror. The fashion for these died out thanks to the whims of a monarch. According to Yeomans, when Queen Charlotte, consort of George III, who had enjoyed taking snuff for a decade, arrived at the conclusion that it was ‘a filthy habit’, consumption of snuff across the country diminished. The sale of Queen Charlotte’s possessions in 1819 is said to have included over 90 snuff boxes.

Pill boxes themselves were often an elaborate affectation. Often they contained palate cleansers or breath fresheners in the form of spices or cachou lozenges, and the consumption of these would have constituted a performative demonstration of the fashionable pill box itself.

French enamel boxes, while often older (manufactured up to the mid-1800s) are, according to Yeomans, less collectible. Almost all remaining examples of French antique pill boxes were produced by one factory, Samson of Paris.

Dick and Helen Hope of Cotswold Collectibles presented a range of silverware at the fair, including antique silver cigarette cases, antique silver lighters, card cases and vestas (also known as vesta boxes or vesta cases). Vestas made for some of the most captivating objects on show, and many originated from the silversmiths in Birmingham, home to the Antiques for Everyone Fair.

Designed to contain “strike anywhere matches,” vestas rose to prominence along with the fashion for smoking cigarettes (around the 1880s). Common vestas at the time may have been made of utilitarian tin while the wealthier cigarette smoker may have had one made from silver. 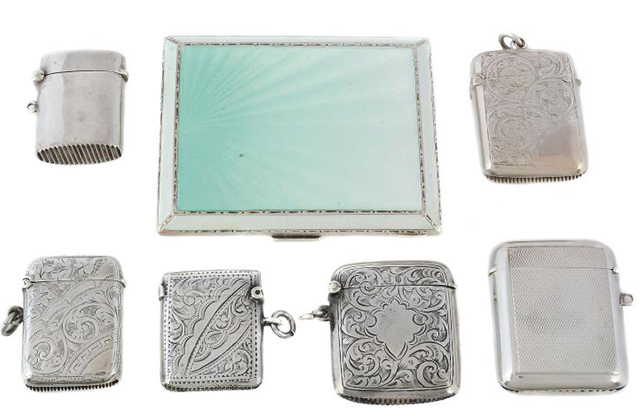 The design of many common vestas was adapted from the traditional Georgian snuffbox design: a rectangular box with a flip-top lid. Vestas, however, are clearly distinguishable vesta from the inclusion of a serrated patch for striking a match. Also like the snuff, pill and patch boxes of the past, vestas were an object specific to a particular period in history, as these were overtaken by throwaway matchbooks and durable petrol lighters from the 1920s onwards.

The rarest item in the Cotswold Collectibles display was a trench or fisherman’s storm vesta made by JC Vickery, a brand that was at the time on a par with the likes of Asprey, but which ultimately went bankrupt in 1930. A practical hinged box that included flaps that could be raised to either protect the striking match from the elements, or keep light created by the flame as it sparked it to a minimum in the trenches. Since this particular vesta was dated 1914, it seems likely it was an unusual piece of war memorabilia.

A broad selection of wall-mounted Fusee antique clocks were presented by London dealer Edward Burd, who considers a Fusee clock the only sort of clock worth having. The majority of Fusee clocks are either “schoolroom clocks” (straightforward round dial clocks) or clocks with trunk or drop dials. 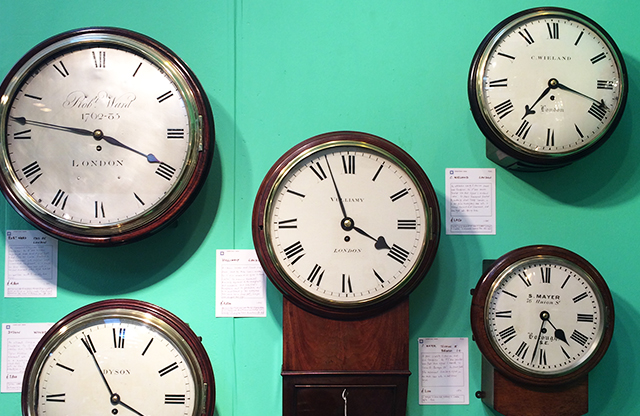 Clocks on display from Edward Burd, Antiques for Everyone Spring Fair, April 2017

The name “Fusee” is derived from the French fusil, referring to the winding mechanism used in the wheel-lock guns used historically. The fusee was a device developed to compensate for clock and watch springs, which regularly proved unreliable. It works on the premise of a fulcrum and lever, the principle of which is that the force delivered to an object can change, even if the input remains the same, depending on the length of the lever used to apply the force.

While French clockmakers took a different approach to the issue by working to improve the reliability of the spring, a fusee was the commonly used device in English clockmaking until the 20th century. Burd attributes the downfall of the industry in 20th century Britain to the British loyalty to manufacturing by hand; it may have resulted in a high-quality clock, but could not compete with the speed and cost of mass manufactured clocks produced in German and American factories. “The [Fusee] clocks left behind are second to none in the quality of simple and robust engineering and timekeeping accuracy,” says Burd. 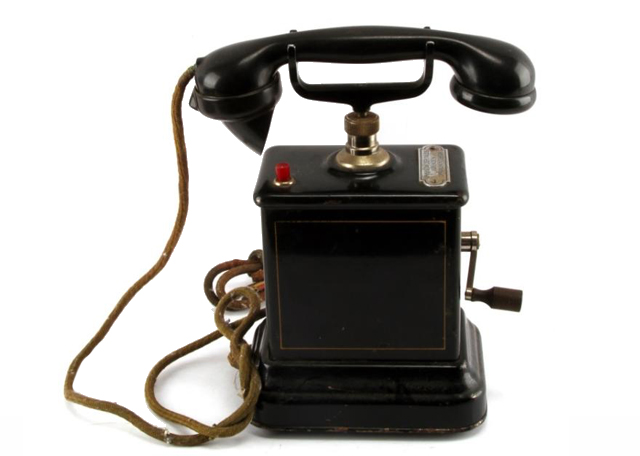 Trends, wealth and wars dictate the course of industries through history, retiring once essential objects and giving way to newer inventions and models. Any handful of objects from the variety on show at Antiques for Everyone Fair will demonstrate just that. Medical discovery, the dictatorial taste of monarchy or a competitive market are just some of the factors that have determined the longevity of objects in the past, leaving one to wonder which of today’s routine objects will become tomorrow’s collectibles.

The Antiques for Everyone Fair, spring edition, ran from April 6-9. In the area? See more details on this summer’s edition (July 20-23).

On the hunt for rare finds online? Explore an array of antique collectibles, decorative art, and furniture now on Invaluable.