In the vast field of ceramic makers, American artists are regarded as some of the most collectable creators of the past century. Since the rise of the great American ceramic companies in the late 1800s, several names, among them Arequipa, Grueby Faience, and Rookwood, have risen to the top for their exceptional quality and captivating designs. The compelling nature of these makers means they can come with a steep price tag. For example, a Frederick Hurten Rhead peacock vase sold in 2014 for $560,000, setting a new record price for American pottery.

While this sale is somewhat of an outlier in terms of price, this article, which highlights some of the most collectible American ceramic makers, reveals that many pristine ceramic pieces are following in that trend by selling increasingly above their estimate. With prices on the rise, current market conditions could provide an excellent opportunity to start a collection of American ceramics. Read on to learn about some of the creators most coveted by collectors today.

Produced for only a seven year span in the early decades of the 20th century, Arequipa Pottery embodied the organic motifs and subtle tones of the Arts and Crafts era. Established in 1911 by Dr. Philip King Brown, Arequipa was unique from its ceramic contemporaries in that its vessels were created by the doctor’s own patients who were recuperating from tuberculosis. Over the subsequent years – Arequipa maintained production until 1918 – the studio enjoyed a bevy of illustrious collaborators, including Frederick Hurten Rhead, who contributed to the richness and variety of Arequipa’s designs. 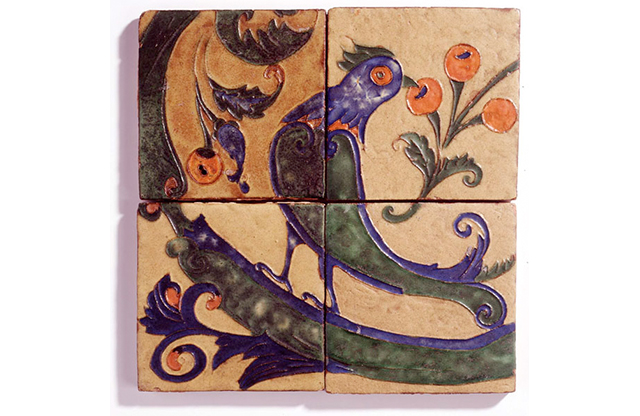 The Cowan Pottery Studio was based in Lakewood, Ohio, along the shores of Lake Michigan and just west of Cleveland. Rising to prominence in 1920, Cowan became renowned for its diverse designs, but given the spirit of the Roaring Twenties, their “Jazz” motifs proved to be among their most popular. They also created a line of very successful ceramic figurines towards the end of their tenure. As with many prosperous companies of the early 20th century, Cowan filed for bankruptcy in 1931 following the Great Depression and never resumed production. 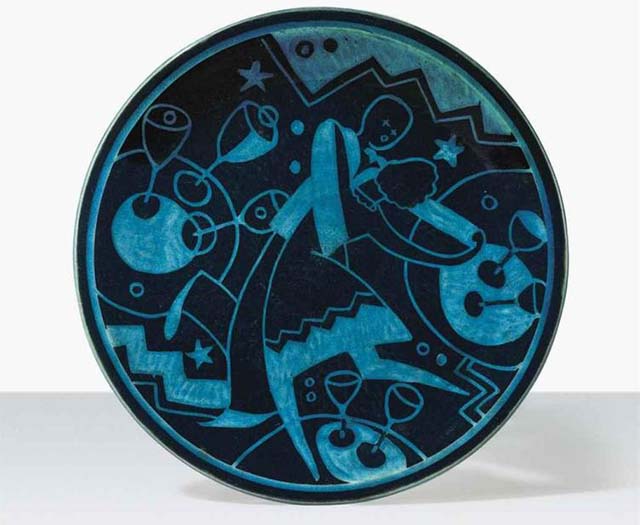 As one of America’s oldest ceramic companies, the New Jersey-based Fulper Pottery was already in production in the early decades of the 19th century. Fulper focused their early 20th-century production on specialized art pottery designs, which became some of their more collectible works. Invoking some of the earliest “flambé” glazes in their designs, Fulper was renowned for producing art pottery from 1910 to 1935. 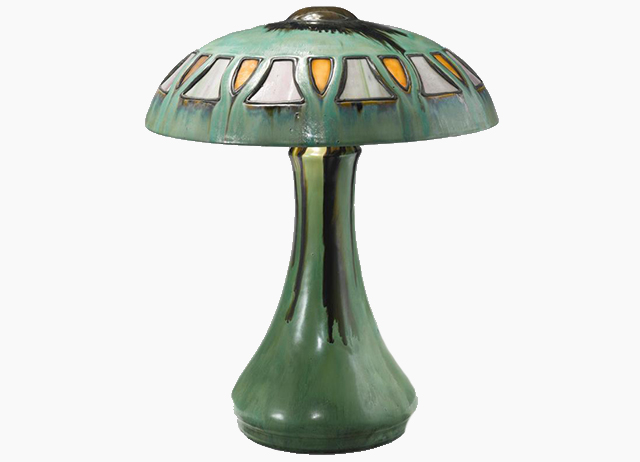 An all-American-inspired ceramic company established in Revere, Massachusetts, in 1894, Grueby Faience was the creation of William Henry Grueby, who was inspired to pursue pottery after a visit to the World’s Columbian Exposition, a fair held in Chicago in 1893. Blending motifs from the Arts and Crafts and Art Nouveau movements, Grueby also frequently collaborated with leading furniture and decorative art designers of the day. These projects included, for example, the creation of ceramic tiles to accent Stickley furniture or ceramic lamp bases to be paired with a Tiffany glass lampshade. 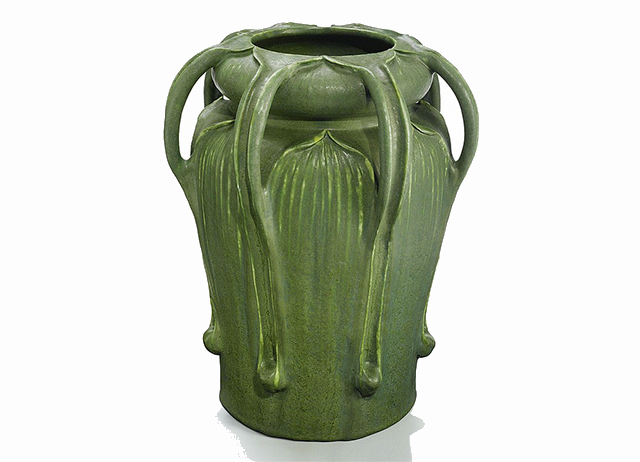 Taking its name from one of the most prestigious women’s colleges of the 19th-century American South, Newcomb College ceramics celebrated the versatility of nature’s motifs in their exploration of the Arts and Crafts ideal. An impressive body of work created by both students and faculty, Newcomb College ceramics are renowned for their subtle colors and natural references that appear as fresh today as they were a century ago. 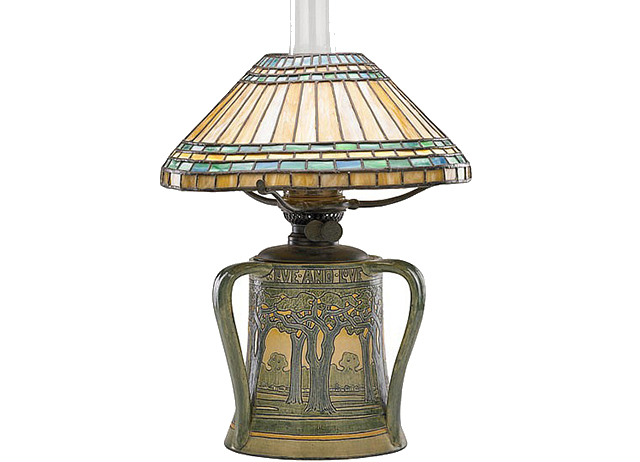 Frederick Hurten Rhead’s importance as a ceramic designer cannot be overstated. Though he was a native of England, Rhead spent the better part of his professional career working within American ceramic companies, even establishing his own company, Rhead Pottery, in Santa Barbara, California in 1913. His ceramic designs were renowned both for their elegance and expertise, and thus Rhead was invited to work in a wide range of workshops, including those of the Arequipa, Roseville, and Weller companies. Rhead was also a beacon for innovative ideas, a testament to which was his role as designer for Homer Laughlin’s wildly popular Fiestaware line, which launched in the mid-1930s.

As a result, Rhead’s works sell for consistently impressive prices today. Prior to his record vase sale in 2014, Rhead had previously held the same top honor since 2007, when one of the vases created in his Santa Barbara studio sold for $430,000 ($516,000 with premium).

His influence extended to the next generation of ceramic artists, and in some instances these student works prove as collectible as Rhead’s own creations in the market today. A prime example is the work of Margaret Cable, who trained with Rhead prior to becoming the ceramics department director at the University of North Dakota in 1910. A recent sale of one of her vessels, which featured a series of stylized ground squirrels, sold for more than six times the high estimate. 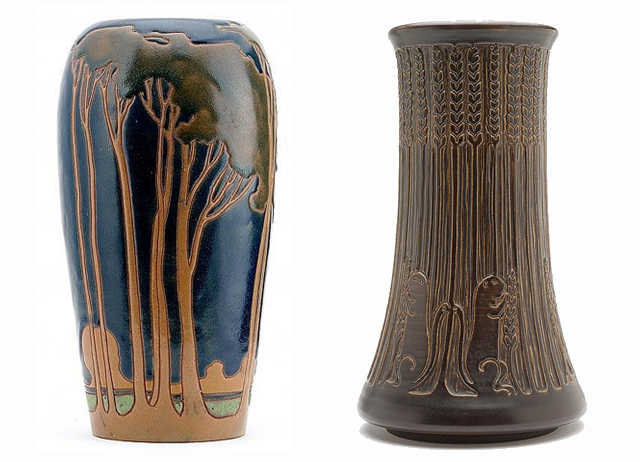 Rookwood was a dominant presence in the Midwestern ceramic market from 1880 to roughly 1930. Based in Cincinnati, Ohio, Rookwood was renowned for their splendid motifs inspired by French and Japanese designs as well as their experimentation with novel glazes. These breathtaking vessels continue to compel collectors today, particularly if they are exceptionally noteworthy. One such example was an astonishing Black Iris vase, designed by Japanese artisan Kataro Shirayamadani on visit to Rookwood in the late 1880s. Selling for $305,000 ($350,750 with premium) in 2004, this work held the record as the most expensive vase by an American maker ever sold until 2007. 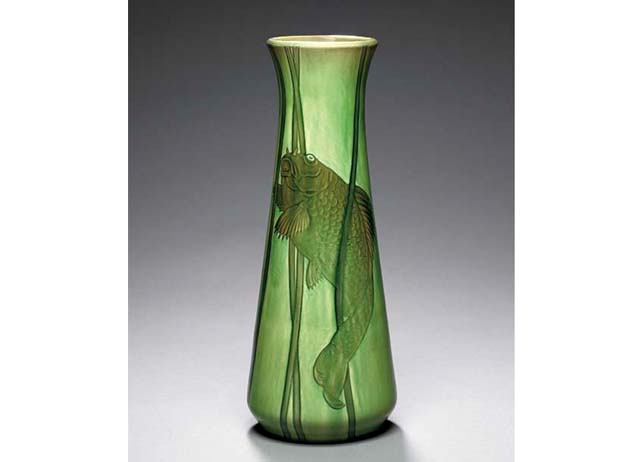 The ceramic wares of the Saturday Evening Girls (SEG) derived from a club originally formed in 1899 to promote literacy among the female immigrant population in Boston, Massachusetts. So popular was the club that one of its organizers realized the potential of the meetings as a means of educating women in practical skills, such as pottery. Soon after, a modest studio was established, and the women of the organization began producing striking ceramic works in the style of the Arts and Crafts movement, so prevalent at the turn of the century. For modern collectors, SEG ceramic pieces can be very budget-friendly.Echoing some of the brilliant motifs of their contemporary colleagues at Newcomb College, the SEG wares can sell at more modest prices, depending on the scope of the work. 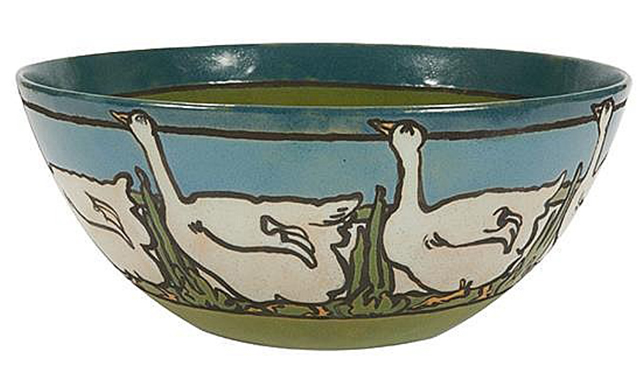 Once the largest ceramic maker in the United States, Weller Pottery first opened in 1872 in south-central Ohio. For the early decades of the 20th century, Weller was one of the leading producers of art pottery, including the iridescent glazes of Jacques Sicard works (1902-1907) and the effortless elegance of Frederick Hurten Rhead’s Jap Birdimal line (1903-1904). Following the Great Depression, the handcrafted artisanship of Weller’s ceramic works began to wane, making the pieces produced in the early decades of the century the most desirable. 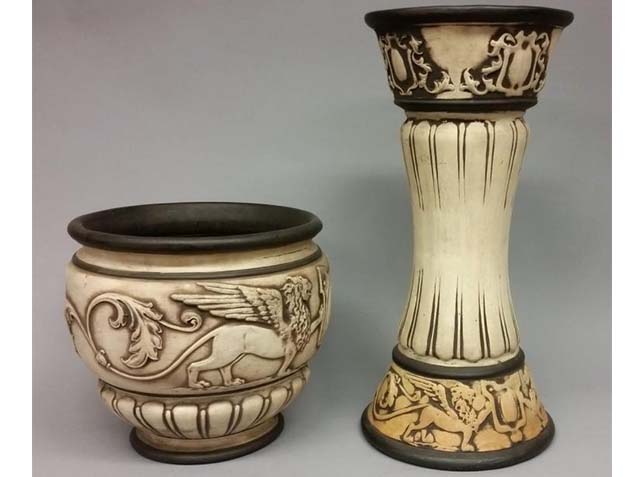 While many of the most acclaimed ceramic makers hail from the 19th and early 20th centuries, there are also some more contemporary ceramic artists who garner a similar cachet among collectors. One of these modern masters is Beatrice Wood, whose ceramic works from the 1930s to the 1990s expressed her interest in experimental glazes and forms that echoed the clean lines of early 20th-century Minimalism and the deep questioning of art’s role inherent in Dadaist thought. 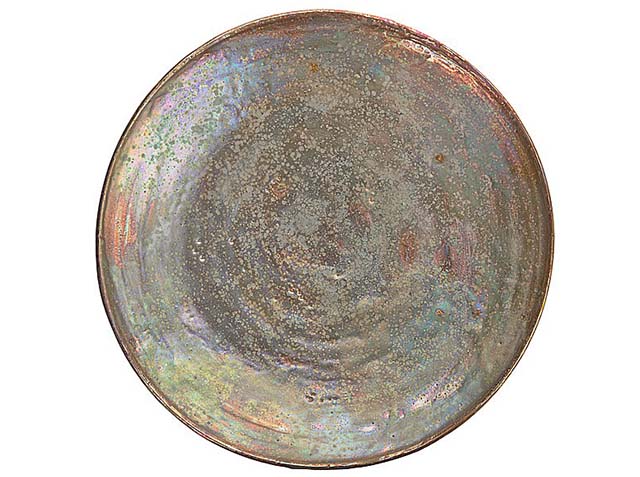 Another ceramic innovator is Viola Frey, a Californian sculptor who attracted great acclaim from the 1960s onward for her monumental ceramic sculptural installations that played with the ideas of scale and the expectations of the medium of ceramic. 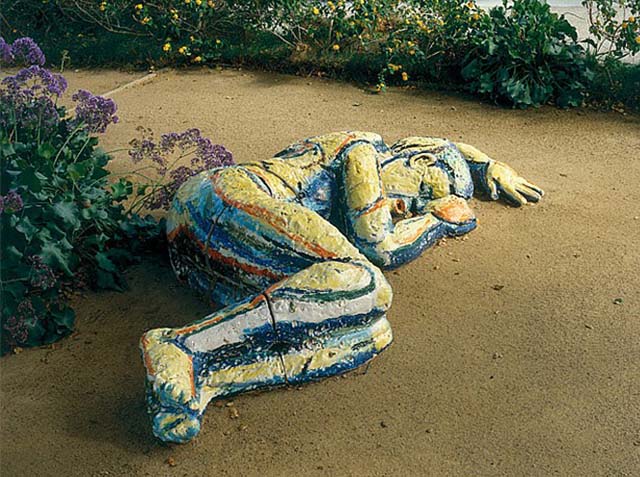 Find exquisite ceramic works by these iconic artists and more now on Invaluable.