Despite the quality and beauty of the historical models, the market for vintage Tissot watches remains relatively subdued. And herein lies an opportunity for the savvy buyer to own some truly fabulous vintage timepieces that will still command the respect of even the most experienced and choosy watch aficionados but which, branded by other premier makers, might otherwise be out of reach.

Greatly in Tissot’s favor are the facts that the quality of production of their vintage watches was very high, the company developed many in-house calibres and its close association with Omega helped to build its fortunes. 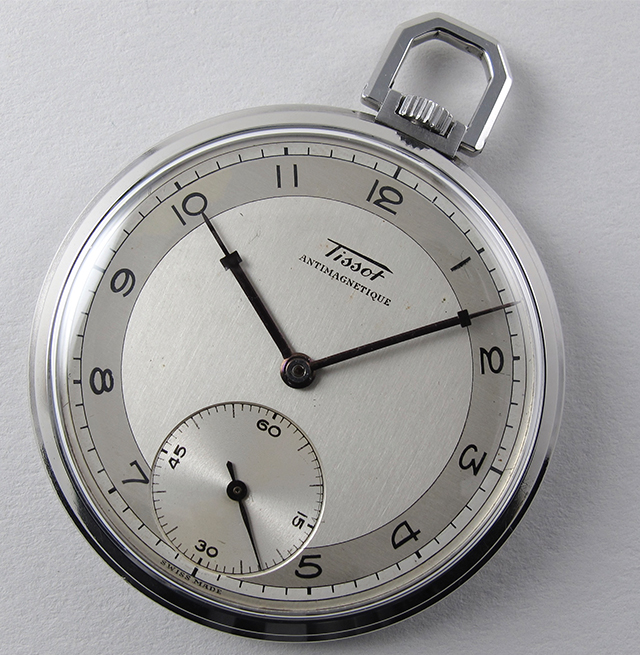 Originally founded in 1853 by father and son duo, Charles Félicien Tissot-Daguette (1804-1873) and Charles Emile Tissot-Daguette (1830-1910), the watchmaking firm of Tissot has enjoyed a long and illustrious history. Innovative in both the form and function of its watches, Tissot’s timepieces from the golden era of vintage production (1930s-1960s) are highly regarded by enthusiasts and collectors.

In 1930, Tissot and Omega formed an alliance as a multi-national holding company under the banner of the SSIH (Société Suisse pour l’Industrie Horlogère SA). The formation was a reaction to the international economic crisis that had ensued following the Wall Street crash the previous year. The collaboration enabled Tissot and Omega to pool resources and produce a complete range of watches. In 1932, Lemania, the famed chronograph movement maker, joined the group – a collaboration that would become especially important to Omega in the years to come.

The Coming of the Chronograph 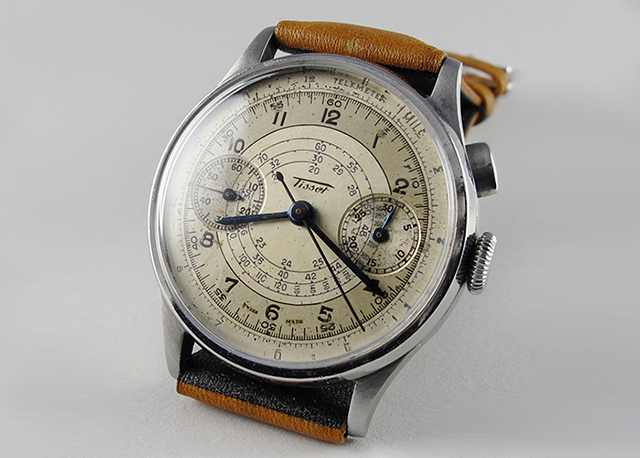 Vintage chronograph models produced by Tissot during the 1930s and 1940s included some outstanding designs, such as the superb example shown above. This watch dates to 1938 and incorporates a Lemania calibre CHT15, which is a column wheel chronograph movement with single button activation. The watch has a superb two-tone dial with subsidiary dials for constant seconds and a chronograph recording dial with continuous or ‘creeping’ minute register to record periods up to 30 minutes.

With a wonderful vintage look, the dial has light and even oxidation, strong two-toning and attractive tachymetric and telemetric scales calibrated in blue, the former of which is displayed by way of a spiral to the dial’s centre. The steel case is large for a vintage watch with a diameter of 37mm and is classically designed with gently down-turned lugs and a typical, 1930s, ‘olive’ shaped, chronograph pusher. Tissot chronographs from this period can be found from around $1,500-3,500, depending on style, condition and rarity. 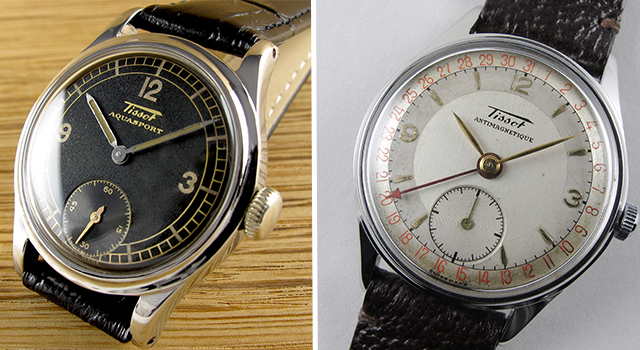 As sports watches gained in popularity during the 1940s, Tissot produced a range of different models with robust stainless steel cases, typically with screwed down backs to help protect the movements from the ingress of dirt and moisture. These models were manufactured with a variety of different dial layouts and their collectability and value can vary greatly according to their style and design.

Above left is a Tissot Aquasport model, made in circa 1945, which has a stunning matte black dial with gilded numerals and minute track. Above right is a Tissot Ref. 6445 model which has an outer date ring and a two-tone dial. Both of these watches have cases that are similarly styled with distinctive scooped bezels – a little more unusual than the more standard rounded or chamfered bezels favored by many manufacturers during this period. A range of Tissot sports watches of this type can found with prices varying from around $200 to $1,000, once again depending on style, rarity and condition. 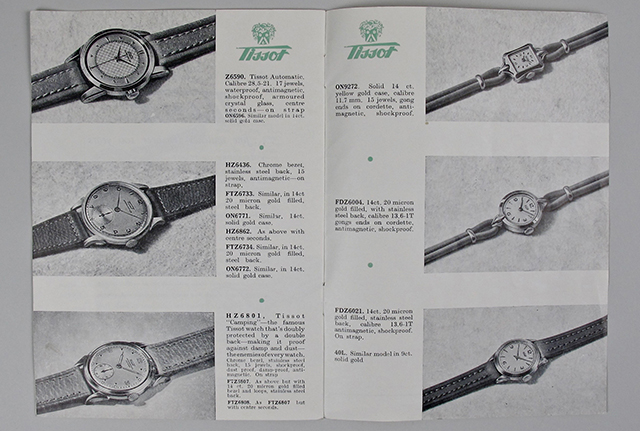 Throughout the 1950s, Tissot continued to manufacture a range of both sporting and classic watches. Yet it was in 1951 that the company began development of what was to become one of their most iconic and important vintage models, the “Navigator World-Time.” 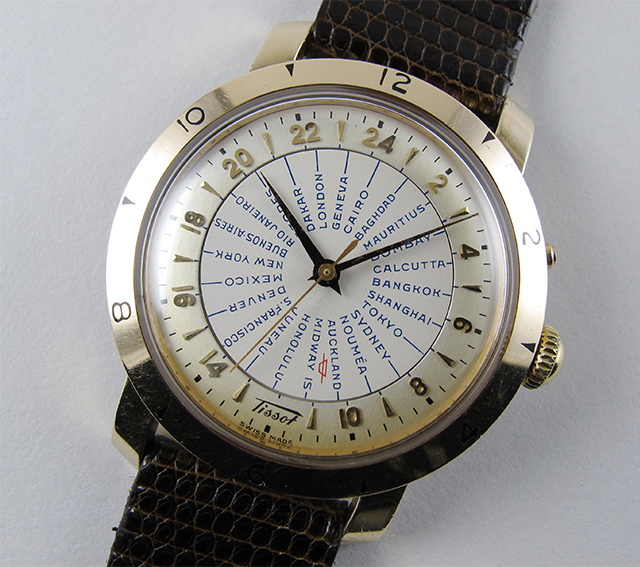 The Navigator was a large automatic wristwatch with indications for 24-world locations. The influence of Omega can clearly be seen in the calibre 28.5-N21 movement of this watch which is extremely similar in design, layout and finishing to Omega’s early bumper automatic movements.

Based on Tissot’s first automatic calibre (the 28.1) which had been launched in 1944, the calibre 28.5-N21 was specifically made for the Navigator and featured an additional pusher which allowed the uncoupling of the central World-Time disc to allow the local time to be set. The time is read in the usual 12-hour format against the outer black track, which has corresponding hour numerals to the bezel. This track is calibrated to 60 in the usual fashion and there are thicker batons at each hour (or 5 minute) increment. The inner revolving disc is calibrated in blue for 24 world locations, the time in each location is indicated against the applied Arabic and triangular numerals which are divided into 24-hours.

A very popular model, the Navigator was updated and re-issued by Tissot in 2013. The original Tissot Navigator watches were available in steel, gold capped and solid gold and prices vary widely from around $1,500 to $5,000, depending on the condition and metal used.

The demand for vintage wristwatches has grown tremendously over the last 3 decades, utterly transforming the market. Values for many brands and models have soared, and it is for this reason that the relative value offered by vintage Tissot timepieces seems so utterly compelling. If you keep in mind the three golden rules of Quality, Condition, and Rarity, there are some truly great vintage Tissot watches to be had.

Alex Barter is co-owner of Black Bough watch shop in Ludlow, England. Alex’s watch career began in 1996 at Sotheby’s auctioneers. Initially based in London, in 2002 Alex was posted to Geneva to run Sotheby’s watch auctions in Switzerland. Spending most of his time travelling around the world, viewing, valuing and selling antique and vintage watches, Alex returned to London in 2005, becoming Deputy Worldwide Head of Sotheby’s watch department. Alex left Sotheby’s in 2009, setting up as an independent watch consultant and co-founding Black Bough with Adam Withington. In addition to his work at Black Bough, Alex acts as a Watch Consultant to Sotheby’s and a number of other Art Companies. Alex is a member of the Antiquarian Horological Society and is a Freeman of the Worshipful Company of Clockmakers, the oldest surviving horological institution in the world, founded by Royal Charter in 1631.