If art is a reflection of the time and culture in which it is produced, then folk art is perhaps most closely tied to the pulse of human existence. Having emerged in the 19th century as art produced by self-trained artisans, the term “folk art” refers to an incredibly varied range of art – from crafted objects and signage to paintings and furniture.

“The American folk art market has been strong for quite some time. While the interests of renowned collector and philanthropist Abby Aldrich Rockefeller may have been avant garde in the 1920s and 1930s, American folk art has seen robust interest throughout the late 20th and early 21st centuries,” says Amelia Jeffers, President & CEO of Garth’s Auctioneers & Appraisers and Selkirk Auctioneers & Appraisers.

“We see a lot of collector enthusiasm for whimsy and romance. Anything that carries the spirit of a time, place, or person with it. Think: trade signs and figures, paint-decorated utilitarian objects, and handmade gifts.”

“As society places a bigger emphasis and acceptance on individuality, folk art should remain an appealing niche of the art and antiques market,” says Jeffers. “It exemplifies characteristics like anti-establishment, creativity, and an autonomous spirit.”

Tracing the Roots of Folk Art

The folk art tradition developed rapidly in the United States in the late 18th- and early 19th centuries – primarily in the Northeast – as the country recovered from the impact of the Revolutionary War. During this period, European settlers began to revive the artistic traditions of their home countries. Practices such as quilting and whittling became commonplace and ran counter to the refined artistic traditions of the day. These methods were not taught in the revered art academies of Europe, but rather were artisanal traditions that had been handed down from one generation to the next.

Folk painters, for instance, often abandoned the rigors of perspective, proportion, and light and shadow in their paintings; elements that had been central to the principles of painting for centuries. Instead, folk artists relied on bold color and generalized light source, which yielded a more stylized aesthetic that departed from traditional artistic conventions. The result of this exploration was the emergence of a group of practitioners who played with form and color as a means of celebrating their cultural legacy, while also reacting against the limitations of the fine art world.

This novelty, which in many regards foreshadowed some of the later innovations of modern art, was not fully appreciated until the 20th century. The founding of New York’s American Folk Art Museum in 1961 offered validation for the field as its own force among artistic equals and spurred connoisseurs and collectors alike to invest in folk art. Soon after, the study of folk art among academics surged, and specialized sales of folk art began appearing on the calendars of the major auction houses in the late 1970s.

Discover some of the principal areas of folk art below, and learn why these objects are so compelling for collectors today. 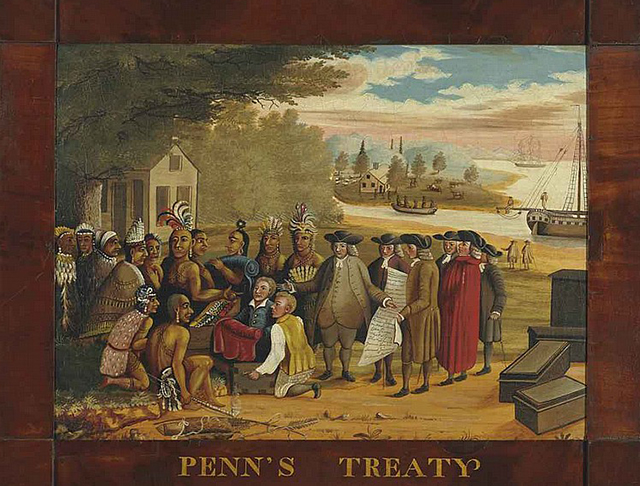 Paintings are perhaps the most popular collector’s item within the field of American folk art – and subsequently, tend to achieve the highest prices. Folk painting also offers some of the most varied subject matter, from dignified portraits to seascapes, and is further diversified by array of painterly styles. Thus, the appeal of these paintings can be manifold: in addition to the caliber of the composition, many American folk paintings depict identifiable figures and moments in American history, which can present a particular attraction for collectors. 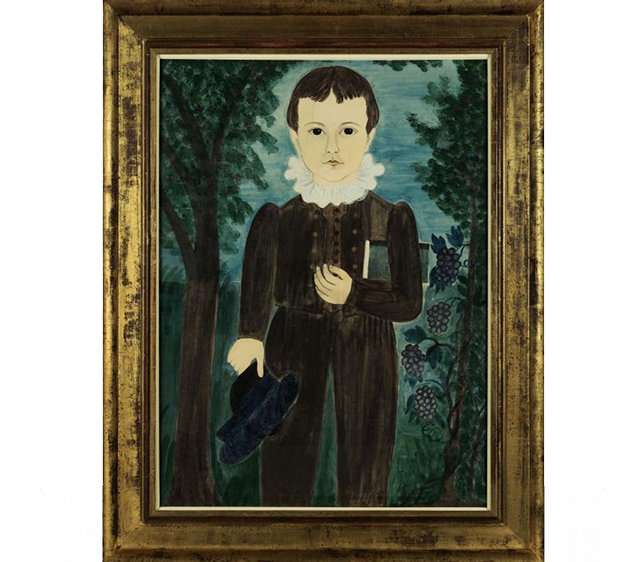 Prolific folk painter Edward Hicks (1780-1849) was a distinguished Pennsylvania Quaker and who began painting as a means to support his occupation as a preacher. His compositions proved captivating, though, and soon he was an acclaimed figure of early 19th-century American painting. That prestige lives on today, with many works by Hicks achieving million-dollar hammer prices in the past decade.

Also consistently popular among folk art collectors is the field of woodcarving. While some of these pieces are still in pristine condition, many folk carvings ranging from signage to figurines reveal the signs of wear, a fitting reminder to the folk art collector that many artists in this field created objects that were aesthetically engaging but also fundamentally functional for various daily activities.

As a rule of thumb, the elaborateness and preservation of a folk carving is directly related to its value on the collector’s market; an exception, though, is the category of the duck decoy. A popular form among 19th-century folk artists, duck decoys, even with their worn surfaces from duck hunting and their relatively simplistic design, are a perennial favorite and can sell for thousands of dollars. Part of their popularity is owed to the fact that the carved wooden duck decoy is a thing of the past: following World War II, the decoy presumed a plastic composition. 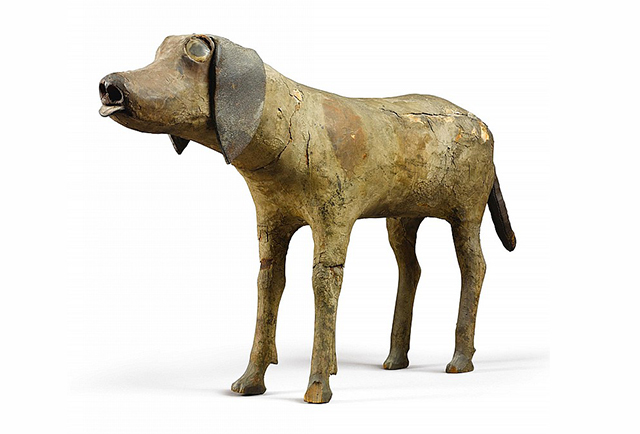 An exception, though, is the duck decoy. A popular form among 19th-century folk artists, duck decoys, even with their worn surfaces from duck hunting, are a perennial favorite and can sell for thousands of dollars. Part of their popularity is due to the fact that the carved wooden duck decoy is a thing of the past. In the years following World War II, decoys were manufactured in plastic – an inexpensive, more weather-resistant material, making the old-fashioned, handmade tradition more desirable among collectors. 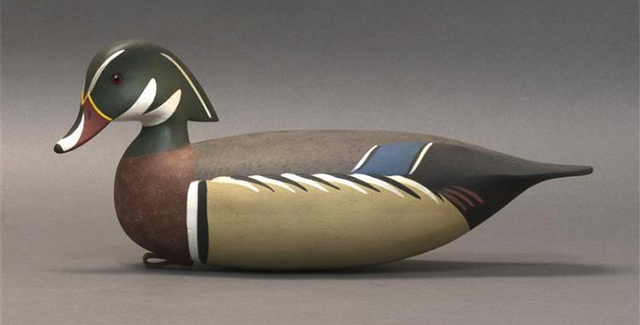 Tramp art is a movement closely related to folk carving. A unique product of the late 19th century, tramp art was a decorative approach that involved the repurposing of found wooden objects, typically derived from shipping or storage containers. Through carving and whittling, these fragments were transformed into elaborately decorated objects featuring geometric patterns, and adorned everything from wall mirrors to sideboards, with boxes and frames among the most common examples in the market today. 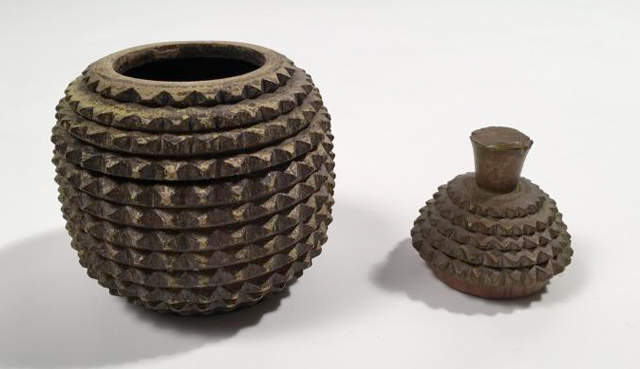 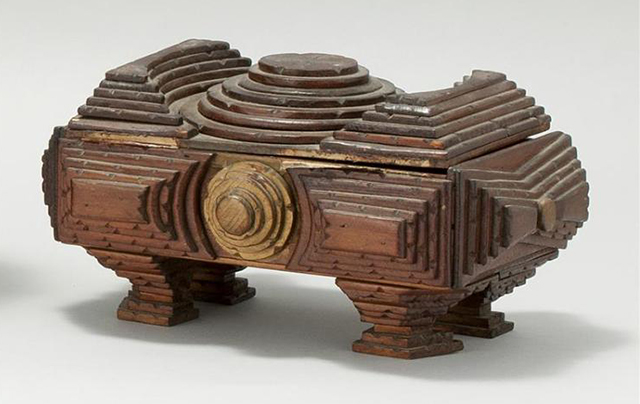 Tramp art was recognized as an extension of folk art in the late 1970s. Its name, though, is somewhat of a misnomer: few vagrants nor itinerants created “tramp art.” Instead, it is believed that the name is derived from the expressly utilitarian nature of both the genre’s materials and methods. 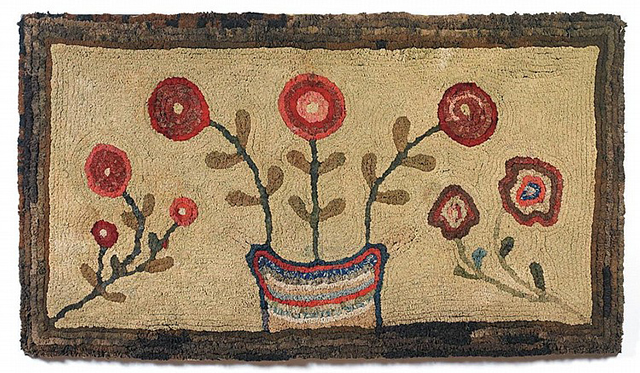 With a heritage that dates back centuries, woven quilts and rugs are also one of the most essential components of American folk art collections. While some rugs are made from finer materials, such as silk, many quilts are rendered with more utilitarian – and often repurposed – materials. 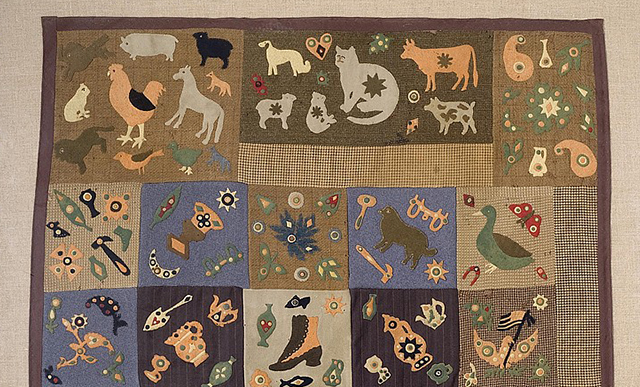 What is perhaps most fascinating about the quilting tradition, though, is that so many of these woven wonders tell their own stories. Some quilts feature panels bearing family names; others incorporate identifiable patterns or signature motifs. 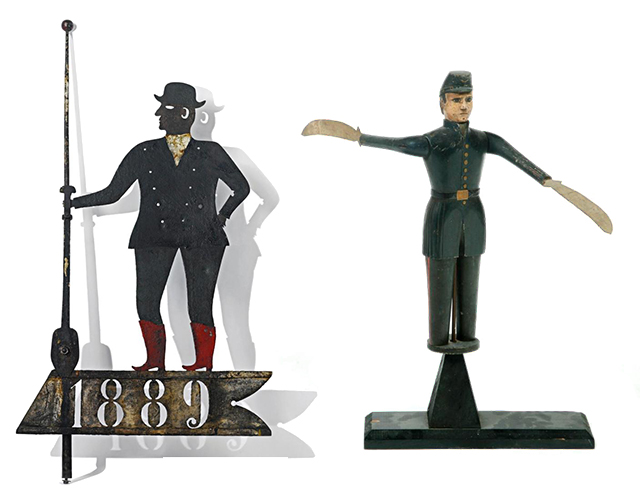 Folk art collectors clamor for well-preserved weathervanes that share in the tradition of unique yet usable design. Weathervanes associated with the folk art tradition can vary widely in price: those that were mass-produced in molded forms typically sell at a lower price point, while those of bespoke brilliance often achieve notably higher prices. One of the more intricate variations on the weathervane is the whirligig. These blended the function of a weathervane with the humor of frantic movement, as the rush of wind would typically make the limbs of the figure spin wildly. 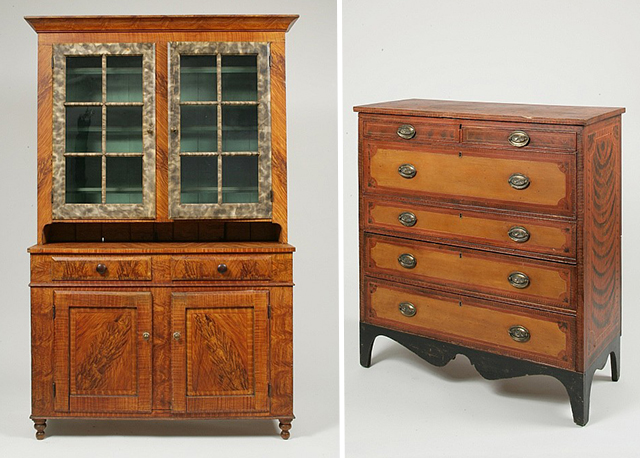 Folk furniture reflects the compelling blend of both craft and carpentry. Hand crafted most often from sturdy timbers, these furnishings are typically accented with carved or painted decorations that bring both vibrancy and versatility. Some pieces are painted with family names, hinting at the history that the piece has enjoyed; others are decorated with enticing motifs from vibrant floral patterns to faux woodgrain finishes. Regardless of decoration, it goes without question that each piece of folk furniture carries its own story. The added benefit of folk furniture is in its ongoing functionality: thanks to its expert construction, folk furniture is oftentimes adequately durable for use today.

Whether its a carving, weaving, or whirligig, Jeffers stresses that when buying folk art, “you should certainly buy what makes you smile, and what you find visually appealing.” The market has seen strong highs in the past, and therefore “fakes abound and untouched surfaces are very hard to distinguish from contrived, purposefully aged examples. As with any category, identify a strong dealer or auction house and listen to their advice.”

Jeffers also notes that the most collectible items are those that are unique and in excellent condition. “Condition and provenance are factors that affect every spectrum of the collecting market, and folk art is no exception. I predict that strong examples with bold execution, great condition and strong provenance will command high prices.”