“Why I Collect” is a series that celebrates colorful, passionate Invaluable collectors with impressive and carefully curated collections that deserve to be shared.

Our editors sat down with 6 Invaluable collectors to discuss their unique collecting tastes, tips for where to find the best examples in the field, and the defining moment that ultimately inspired their passion.

“I feel as though I am serving a purpose by preserving history and American culture.” 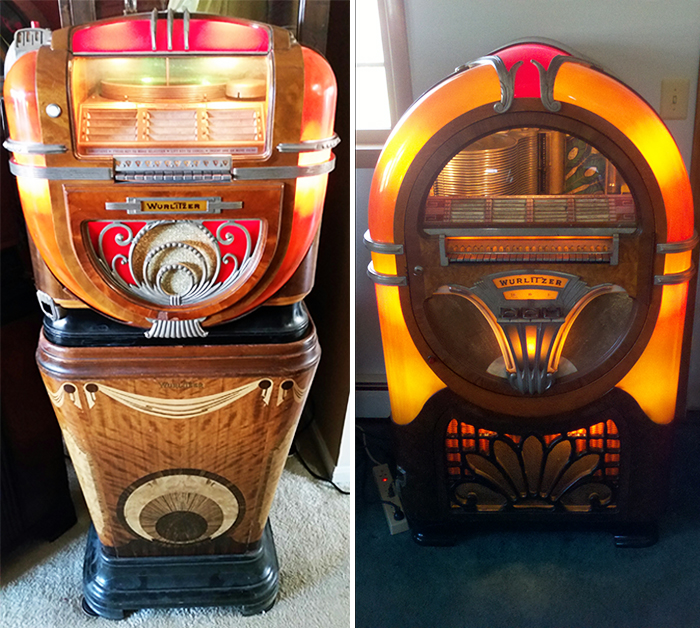 From a young age, Craig Knight has always had a fascination with mechanical objects and how they worked. At the age of 10, he began frustrating his parents by constantly taking household appliances apart – from the Sears lawn mower to the Electrolux vacuum cleaner. Soon, his interest shifted to cars and he began to restore several of them, including a 1955 Chevrolet.

“My interest in cars lasted about 10 years, until I found my lifelong interest – vintage jukeboxes and coin-operated machines. These offer the perfect mix for me: mechanical machines that come with a history, great artistic appeal, and a relation to music,” says Knight. “Collecting offers me a level of fulfillment; I feel as though I am serving a purpose by preserving history and American culture.”

“To this day, I have owned over 250 old jukeboxes and have restored 50 of them. I’ve also expanded my interest into other old arcade items, like fortune tellers and old claw machines.” Knight explains that he finds these items through auctions and by talking to other collectors, and he’s always on the hunt.

“My best find, and one of my favorite pieces, is a 1942 Wurlitzer Model 81 countertop jukebox with a matching original Model 810 stand. It was originally featured on the [television show] Antiques Roadshow.”

As an advanced collector, Knight tries to preserve the original integrity of his objects through his restorations. “The history of these great machines, with their patina and character, is what’s most desired by collectors.”

“I took eleven trips to China, Hong Kong, Taiwan and Singapore to research for my books and collections.” 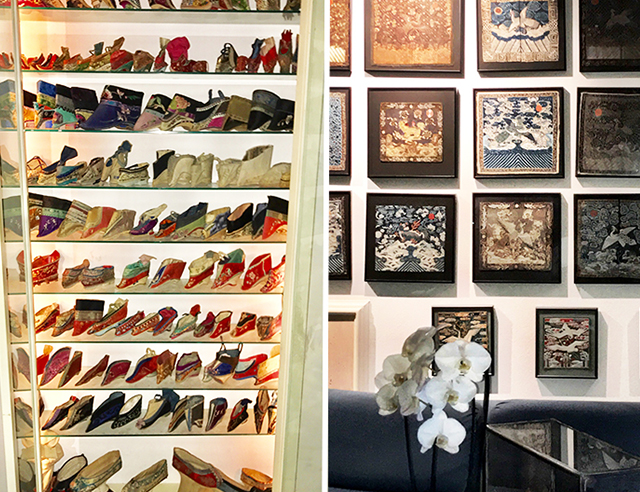 Author Beverley Jackson’s collection of Chinese antiques stemmed from a trip in February 1975 to Tientsin, China. During that time, she says, the madness of the Cultural Revolution raged about her and her group of friends. One night, she aimlessly wandered the halls of her hotel in Shanghai. A waiter who spoke English whispered to her, “Friendship Store opened for Polish sailors who leave tomorrow. Go shopping!”

Jackson got her flashlight and walked five blocks to the “Friendship Store” in total darkness. “It was a store filled with cheap plastic shoes and bicycles, but in a corner was a tiny antique section. There, I spotted a heavily embroidered turquoise silk Chinese robe, and since I collected Persian turquoise jewelry at the time, it appealed to me. That was the beginning.”

After receiving many questions on the practice of foot binding in China during a lecture she was giving, Jackson spent seven years researching and buying antique shoes used in the tradition. Among her shoe collection, the most desirable pairs measure just three-and-a-half inches from toe to heel. Jackson later wrote the prize-winning book, Splendid Slippers, which is still in print today.

Along the way, she put together a collection of Mandarin military and civil rank badges. “In my living room, 65 framed badges hang on the wall. I also have amassed a superb collection of items made from kingfisher feathers.” Civil badges used birds to denote rank (there were nine ranks), and military badges depicted animals, also denoting rank.

Jackson lives with her collections, and enjoys entertaining small museum groups from all over the world. The most frequent opinion she hears from her visitors? “Your home is a museum!”

“Collecting has been a labor of love for both of us – we each continue to look for our very own ‘Holy Grail’ discovery.” 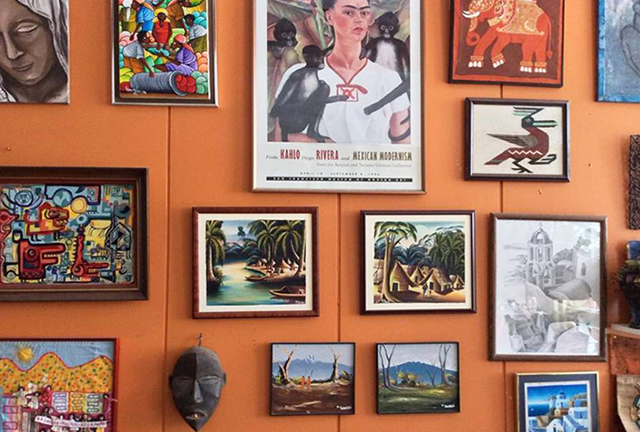 Much of Brenda Lee-Lovell’s interest in collecting began after she took the course, “Psychology of Aesthetics,” in college in the 1990s. She started out collecting decorative African masks, but as her knowledge of their origins and cultural meanings expanded, she began seeking ceremonial masks that were actually used in ritual. She later started collecting Folk musical instruments and religious and spiritual iconography from around the world.

Her husband, Raymond Lee-Lovell, collects vintage character toys, toy vehicles, and objects d’art from the Art Deco period. “I display the items with an eye towards aesthetic integrity, while capturing the social history and zeitgeist associated with them,” he says. “My 25 years of toy collecting hearken back to a time when TV shows such as Batman, The Green Hornet, and movies like James Bond 007 were all the rage.” His fascination with the Art Deco movement came after he saw Diego Rivera’s mural, Detroit Industry at the Detroit Institute of Arts as a graduate student.

“Collecting,” says Brenda, “has been a labor of love for us both – we each continue to look for our very own ‘Holy Grail’ discovery.” Currently, Brenda is searching for a snake charmer’s flute (pungi), while Raymond is on the hunt for a Cor-Cor 17” pressed steel 1943 Chrysler Airflow.

“Our aim is that everything in our house has a story with or for us.” 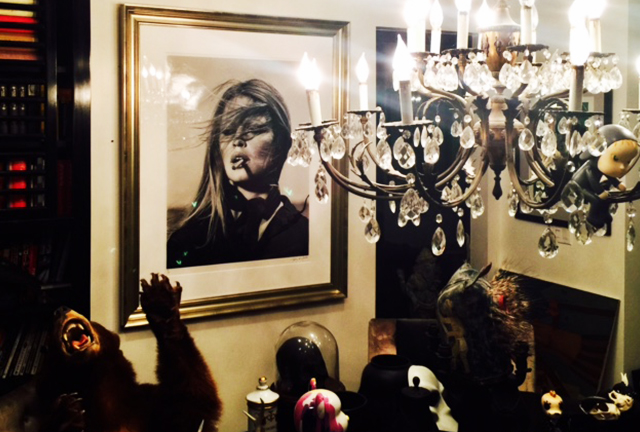 Klaus Moeller’s first piece in his eclectic collection was a wooden sculpture by Nick Dean. He was 17 years old and saw it at an art show in London. The sculpture was 1,000 pounds; he fell in love with it and asked the artist if he could pay for it in ten monthly installments, to which he agreed. “I still have this sculpture today – it has travelled with me from London to Portugal and now to Los Angeles!” says Moeller.

He and his wife collect “anything unusual.” “Our aim is that everything in our house has a story with or for us,” he says. “Every cup and every glass and every pillow. Our beach chairs are by Harland Miller, for example. We have pieces by our friends Terry O’Neill (Brigitte Bardot) and William Sweetlove (Dog with Water Bottle) and Kadir Lopez (Al Capone).”

The Moellers travel often and visit art shows, where they regularly fall in love with works of art. At home, their acquisitions are proudly displayed. “It’s an eclectic mix from a magical Burmese Buddha (which I bought in Burma 25 years ago when I was in the jade business), to an Egon Schiele bust, to an Andy Warhol table cloth.”

One of Moeller’s two favorites is, “The Wish Box,” by Amely Spoetzl, a plexiglass box that contains 72 spheres with perfectly preserved dandelion seeds. “If you are in dire need you can take a sphere, open it, and blow the dandelion and make a wish,” he says. “We haven’t used one yet, but there are 7 missing that friends of ours have used.”

The second of Moeller’s favorites is a set of three small skulls covered in stingray skin and teeth made by his wife – who is also an artist. “She has had some great offers for them, but I could never part with them.”

“I’ve chosen books for my collection because of their stylistic, ornamental, and symbolic characteristics, or for their origin and time-definition.” 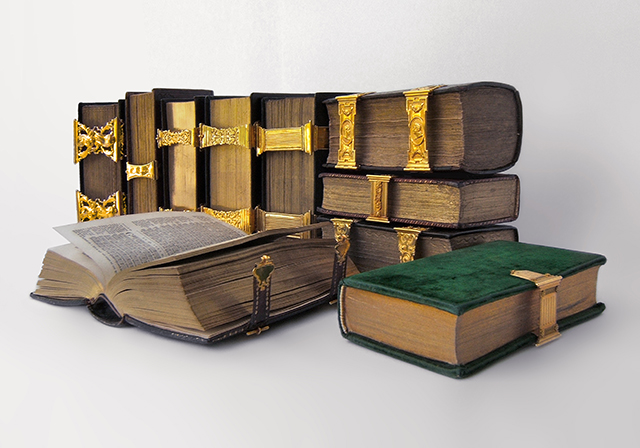 Ten continental gospel-books, all with golden clasps, dating from the 17th through the 19th century.
Photo courtesy of the collector.

Bernard van Noorwijk began his collection of rare books in 1965 after his wife was gifted a bracelet made out of a 1793 silver bible-clasp from her aunt. He believed that using the clasp as piece of jewelry was wrong, as it was meant to bind a book, and started his collection to prevent similar cases of misuse.

Now, van Noorwijk possesses a unique assortment of 365 copies of rare books including church books, Bibles, prayer books, Missals, and some almanacs from 1650 through 1895. His books vary in size, from duodecimo to octavo, and are of European – mainly Dutch – origin. They have leather, turtle-shell, velvet, and precious metal bindings. Some have silver or gold clasps, and most have double clasps.

“I’ve chosen books for my collection because of their stylistic, ornamental, and symbolic characteristics, or for their origin and time-definition,” says van Noorwijk. “I started the collection around 1965, and it’s continuously evolving by acquisition, new supply, and selection.”

van Noorwijk’s collection includes a significant art and culture historical identity. He says that the real value of his books is determined by “decades of national and international travels, visits to fairs, antiquarians, and antique shops, as well as study, research, negotiations, documentation, restorations, and building proficiency” in his collecting category.

“One of my favorite pieces is an adorned pocket bible from the 18th century, which was donated to my collection from an elder couple who wanted to safeguard the book and asked that I keep it forever.”

“It fascinates me thinking back when I was a kid, watching a moon walk on TV, not knowing that decades later I would actually have something used on that moon walk.” 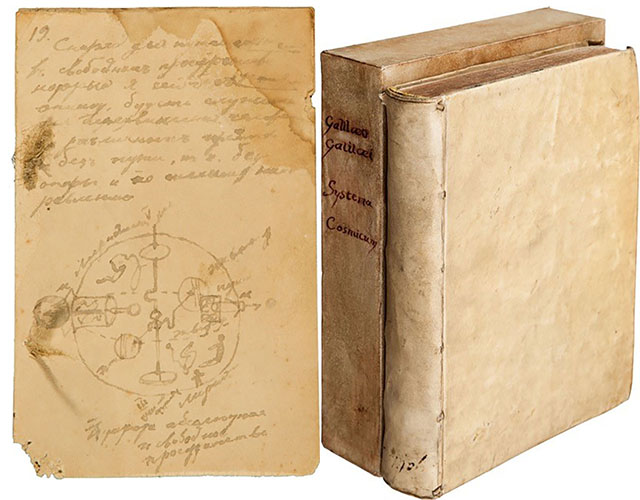 Right: Handwritten notes from Russian scientist and “Father of Spaceflight,” Konstantin Tsiolkovsky,
drawing out what a spacecraft would be like, dated 1883; Left: First edition of Galileo’s, one
of science’s most influential book, published 1635. Photos courtesy of the collector.

Space enthusiast Mike Smithwick grew up as a “child of Apollo” in the 1960s. If there was a NASA space launch scheduled in the morning, his teachers knew that he would be in late. In October of 1968, the very first Apollo flight, Apollo 7, launched into Earth orbit for an eleven-day mission. On the sixth day, a transmission from the craft was broadcast on national television featuring a large sign that read, “From the Lovely Apollo Room High Atop Everything.”

Astonished in that moment, Smithwick was finally able to read something from a spacecraft in orbit (and consequently arrived at school late that day). His 12-year-old mind reeled as he thought, “That would be a great souvenir from the mission, as it will likely be only thing in the history books.”

Twenty years later, Smithwick discovered space-related auctions, and to his astonishment (and good fortune), the exact card he recalled so vividly from childhood went up for sale. Today, it is displayed prominently in his home, as it’s been for over twenty years. He says, “Every day, I walk by it thinking, ‘I really have that thing!’”

Over the years, Smithwick has collected other space relics such as an intact main control panel from a Russian Soyuz spacecraft, a first edition of one of Galileo’s most influential books, a flown mission flight plan from one of the Gemini flights, other flight manuals, mission patches, lunar surface used items, and more. Currently, he is on the hunt for flown patches from every flight, and objects flown on each Shuttle mission.

“It fascinates me thinking back when I was a kid, watching a moon walk on TV, not knowing that decades later I would actually have something used on that moon walk,” says Smithwick. “My collection exists to tell the story of space flight and man’s interest in the cosmos. That includes both flown and un-flown items. Oddball things that are overlooked, mission-used and training manuals, and even toys from that time dealing with the Apollo missions.”

Tell Us About Your Collection

Want to be featured in our “Why I Collect” series? Send your story and images of your collection to the In Good Taste editorial team at [email protected].

← Previous
Collector Tips | Collectors | Why I Collect
Next →