“Now is a great time to buy sterling silver as the prices are conservative,” says Nicholas B. Nicholson, Senior Vice President, Division Head of Furniture & Decorative Arts at Freeman’s. “There is a common misconception that the younger generation does not want sterling silver, but dinner parties and hosting are making a comeback and a sterling silver flatware service is a must have for any proper dining table.”

Today sterling silver adds style and ceremony to any table, regardless of your dinner party rules. Here’s a breakdown of key types and important considerations before you start building or complimenting your collection.

The history of flatware is rich in tradition beginning with rudimentary tools that evolved into the art and business of silversmithing. Hallmarking began in England around 1300 and became mandatory in 1363. It established strict standards for the combination of marks required by law to identify the origin and age of silver made in the UK:

Each European country has its unique hallmarks so there are literally thousands of silver hallmarks on record. 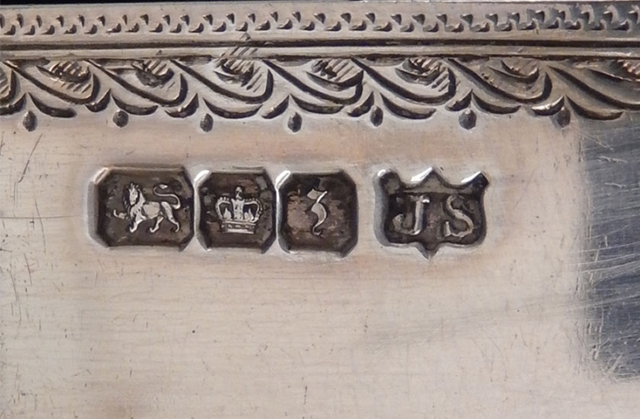 Period European flatware has set records at auction. Of note, The Stephanie de Beauharnais Service, an important German silver and silver-gilt flatware service circa 1830 that sold at Sotheby’s in 2008. The 504-piece service that was engraved with the Baden arms beneath a crown sold for $158,500. 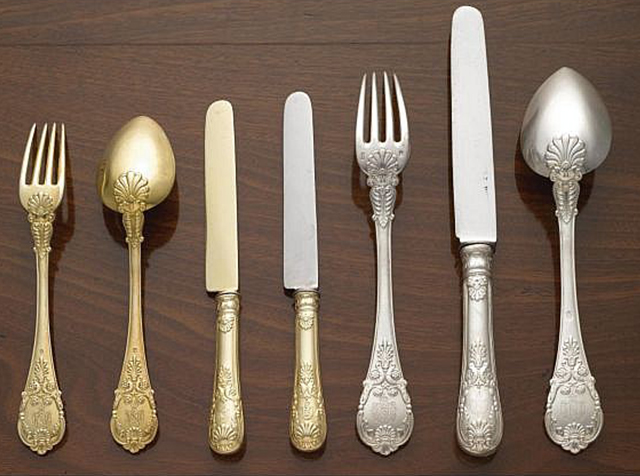 Popular European silver companies include Buccellati of Italy, Christofle and Odiot from France, and George Jensen of Denmark. Founded in 1904, silver flatware and decorative items from this noted Danish company are highly sought after, with vintage sets most desirable. 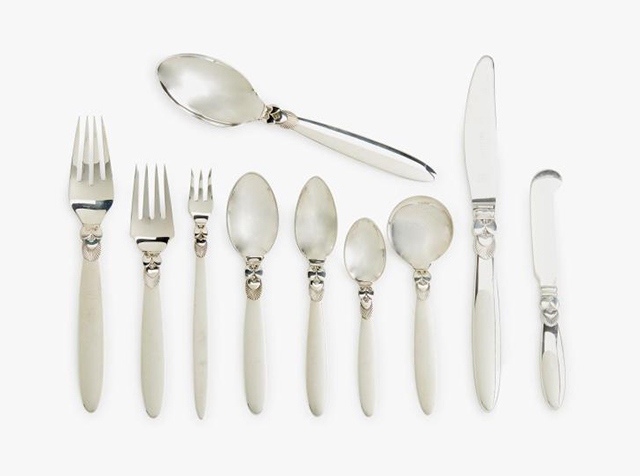 Early American silversmiths were heavily influenced by English and European designs creating two basic styles: the simple, plain designs consistent with Puritanism, and the more elaborate designs of the English patterns, many with nautical references. For example, the gadroon, or decorative edge frequently seen on flatware, is derived from a ship’s rope, and the shell and dolphin are frequently seen in patterns of the period. And like their European counterparts, American silversmiths developed distinct Maker’s Marks that were typically their names or initials.

Hundreds of highly skilled silversmiths were at work in America in the 18th century although few examples of these flatware remain. For example, cutlery by American hero and silversmith Paul Revere of Boston rarely comes to market and commands top dollar as collectors and museums vie for the pieces. 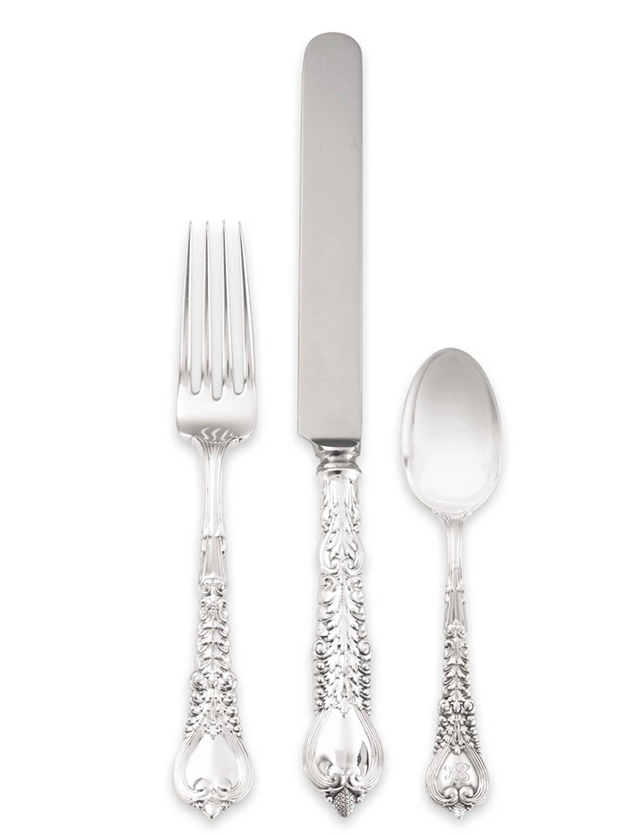 Before starting or adding to a collection, it is wise to spend some time exploring the offerings in upcoming auctions to understand prices, sizes, and patterns.

“Our May sale will include about half a dozen lovely flatware services, ready for everyday use or for formal dinner parties,” adds Nicholson. “The sterling silver flatware sets range in origin from American to English to Danish beginning at a low estimate of $1,000 and others with a high estimate of $12,000.”

Sterling silver flatware can be found in four sizes: luncheon, place, dinner and continental. Each is progressively larger and heavier in silver weight and thus will cost more. Around 1960 many manufacturers shifted to the place and dinner sizes only so you will want to pay attention to which size is being offered, especially if you are adding to an existing collection. 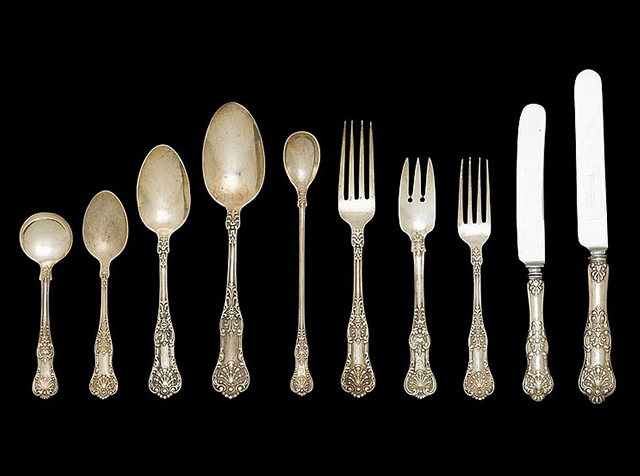 Another distinguishing characteristic is the knife blade that has two styles: the “blunt” or French blade that typically has a bolster and is rounded on the end, and the “modern” blade with its seamless flow from blade to handle. 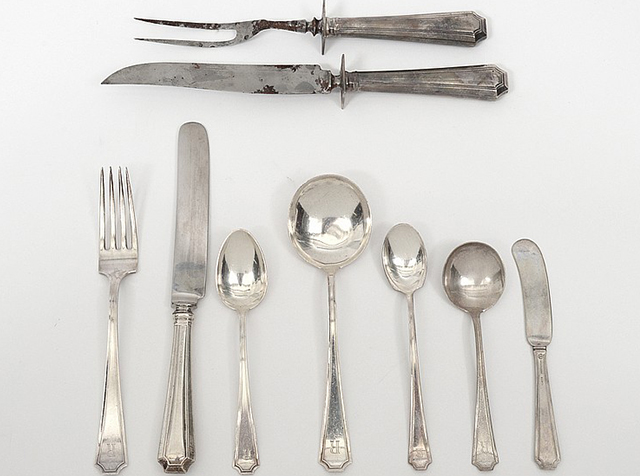 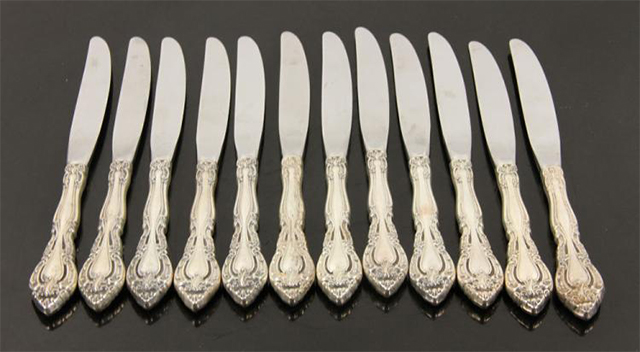 An effective strategy may be to purchase the basic 5-piece place setting for eight or
twelve, and add as your favorite items come to market. Or, if you are fortunate to have inherited flatware but find pieces were lost or damaged over the years, online auctions can help you pick up the pieces you need.

For example, if Mary Chilton by Towle is your pattern, you could have purchased 120 total pieces including twelve nine-piece place settings and carving set, tea strainer and salt and pepper shakers, then completed your service with serving pieces when they became available. 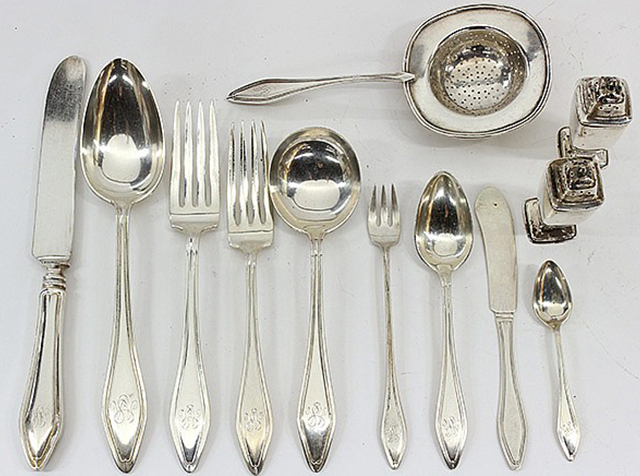 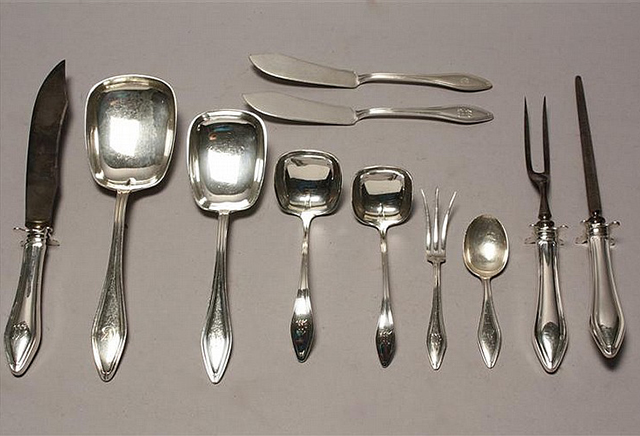 Finally, individual style will dictate which pattern you fall in love with – heavy and ornate, embossed or “repousse” with intricate designs, or simple and classic, with or without engraved monogram. Many collectors believe monograms add to the elegance of the flatware as a reflection of past generations when personalized sterling was highly treasured and part of the family legacy.

How formally you wish to entertain will also inform your purchasing. If you enjoy serving more than three courses, you will need to purchase a larger, more complete silver service.

“A large and complete sterling silver flatware service is not rare to come to market; however, the pattern, maker, date and style are all contributing factors to an item’s rarity and value,” adds Nicholson. “An important and complete set of note is Lot 83 in our May 18 sale. The set includes service for twelve, plus serving pieces, and comes in the original wooden chest purchased from Tiffany & Co. in 1929.” 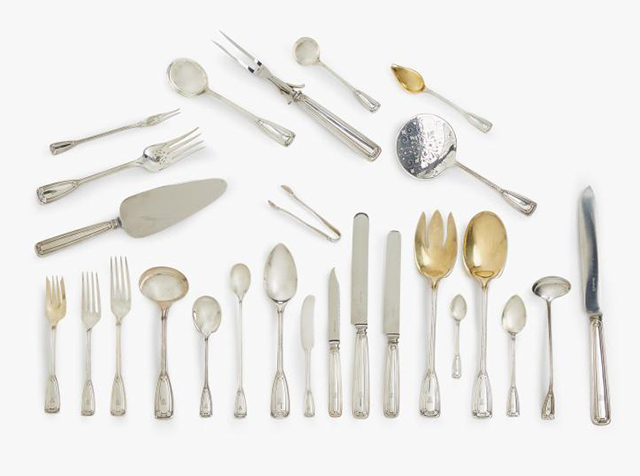 Today’s online auctions provide an incredible selection of estate and vintage sterling silver so collectors of all ages are able to create a personal style that is uniquely their own.